The Coffee Shop Chronicles No. 17 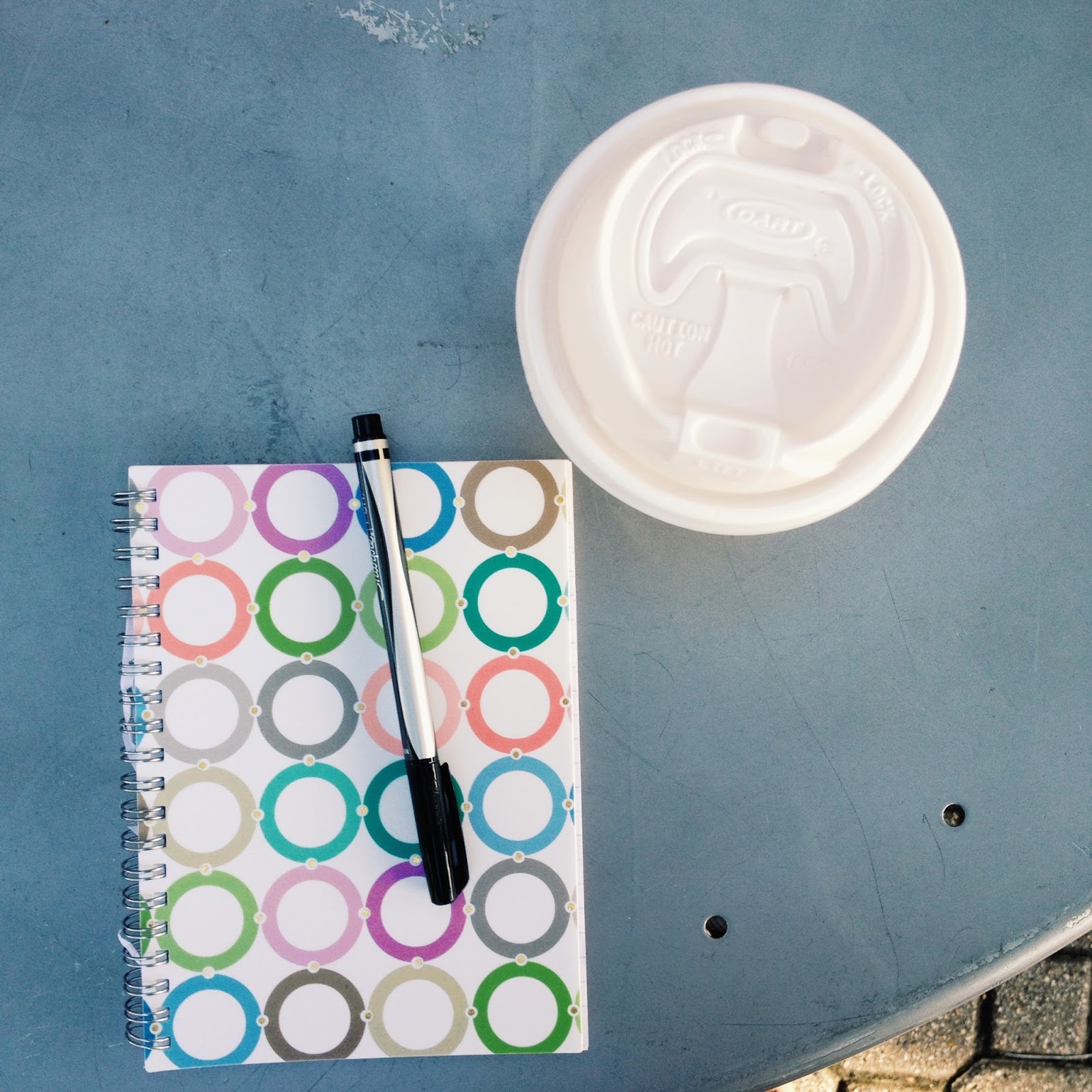 Is it wrong for a lone person to sit at a table for five in an outdoor seating area?

There was another table available, a table made for two,  and I felt sort of bad not taking it. It was located in the hot, bright sun and I wasn't interested in getting sweaty before my morning of writing and antique hunting had even begun.

I was made aware that it was wrong when a dark haired lady in her fifties came out the door of the coffee shop and glanced over at the spacious five seat table and saw me seating there. A look of mild disgust came over her face. She had been part of a group of three ladies that were in the order line behind me.  I am sure they had noticed the empty table on their way into the coffee shop and had made plans to enjoy their conversation there. She had to settle for the two seat table that I had rejected, snatching an extra silver metal chair from a nearby five seat table that a young couple was encamped at. She positioned herself at the two seater so that she could still keep an eye on me, hoping that I would get her unspoken message and move along. Thankfully for me, a group of four businessmen vacated the five seater next to me. The Glaring Lady quickly gathered up her beige, faux leather satchel style handbag which she had securely attached to the metal chairs of her chair and pounced on the vacant table before some other lone interloper showed up to claim it. 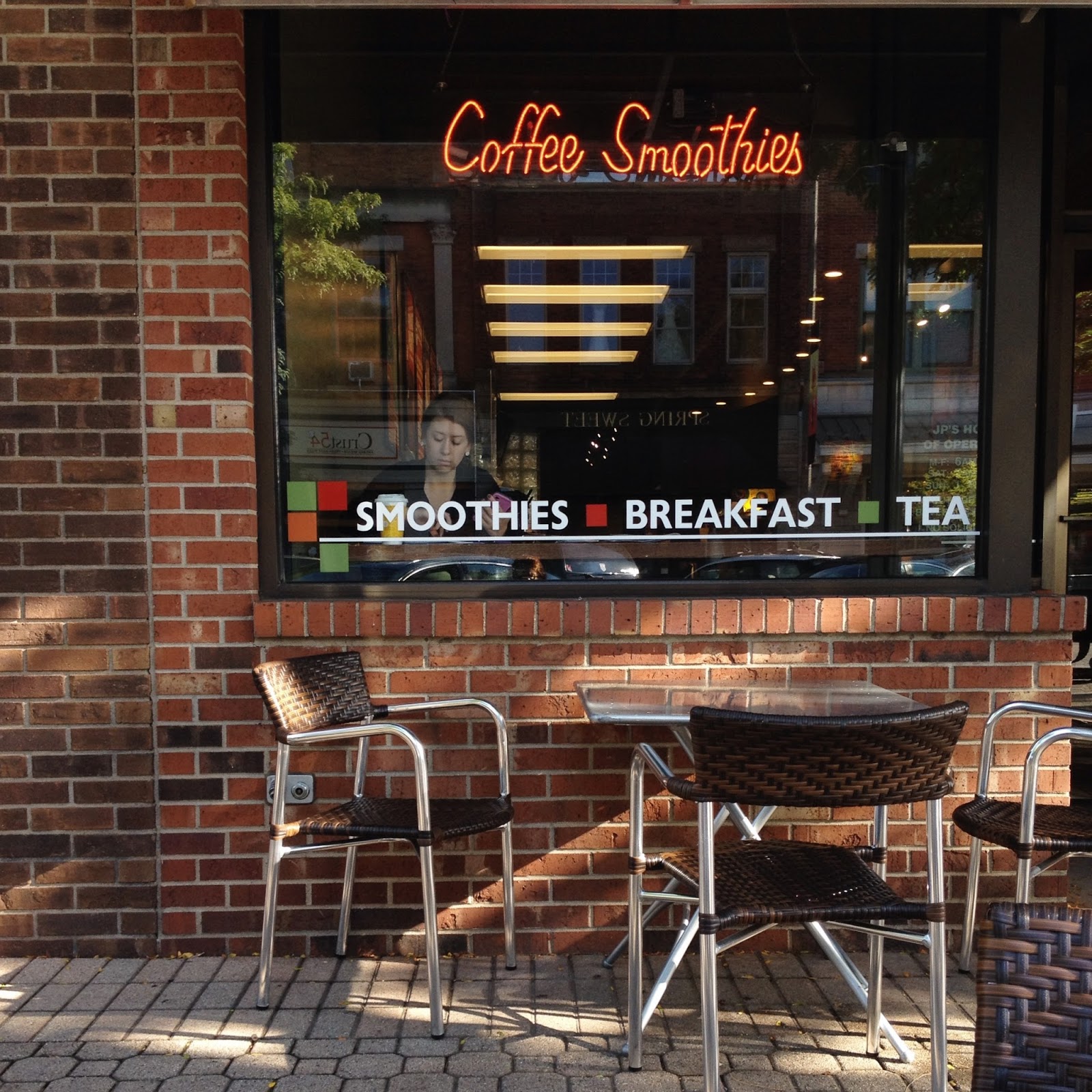 I arrived at the coffee shop at twenty past nine. I figured it would be packed. Every mother within a fifty mile radius eager to get out of the house and reconnect with all her mom friends. You see this was the first day of a new school year.

I was quite surprised when I walked into the coffee shop and there was no one in line and the front seating area was fairly empty.

I stepped up to the order counter to place my order for a Grande Chai Latte, yes back to the Grande size. I had a full morning of antique hunting ahead of me and I needed the extra hydration and sugar. A new boy was behind the register, must not be Miss Pony Tail's shift this morning. This boy had a skateboarder look about him, right down to the skateboarder hair cut and the red skateboarder shoes. I knew he was new when an "oops" escaped his lips after he entered in my payment for my chai. He did great up until that point. I asked him if he was still in training and he said "Yah". Fortunately he knew how to fix his mistake, except that he had to call up the order on the screen again to figure out my change. The total was $4.65 and I gave him a five dollar bill. I could see the wheels sluggishly turning in his head trying to figure it out. I also noticed his fingers counting on the granite countertop. I wanted to lean over and say "you owe me 35 cents", but I didn't, choosing instead to let him figure it out by himself.

My change safely in hand I walked to the end of the pickup counter. There were two Baristas working  today, I guess they thought they would be busy too. Unfortunately neither one of them was the boy with the Johnny Depp hair. Rather nondescript people not worthy of a story.

I went outside to spread out my writing utensils at my lovely, round five seat table in the shade, and began writing the day's tale.

Is it wrong? Hmmmm, I don't think it is, but I am so non-conflict, I doubt I would have taken it. Darn it! I wish I had it in me to do it. But, then again, I would not have been above asking to join you with my friends. I'm glad you're back. I would have loved to go with you! And don't you marvel at how hard it is to make change? That's a post unto itself.

I don't think it is wrong I like to spread and as I give my local coffee shop plenty of trade I think it is ok. I do love those Sharpies my favourite pen to write with..

Ah the whole passive-aggressive thing of staring at you huffily... That could be a whole story in itself!

If it came between sitting in the sun and not sitting in the sun...take the table for five! How did she know you weren't waiting for your five friends! It still amazes me that kids/young people cannot count change! Hope you found some great buys at the flea market!

"I was made aware that it was wrong...." This cracked me up! Haven't we all had those moments of guilt? I'm glad you didn't give in. This week's chronicle was too short! I want more, please. :-)

Love that your back at the coffee shop! Always enjoy reading your adventures.

I am happy you held your ground. The table was free, you saw it, claimed it, enjoyed it . . .

Happy to be reading these again. Good for you keeping the table. Who want's to sit in the hot sun? I do get the older woman's point of view as in her days of youth it was an unspoken rule that you would have immediately moved. Sure she was thinking, "These young people now a days!" Looking forward to more of these!

Where to begin? First of all, I LOVE your opening coffee chronicle photo - it's that little corner of the paving stone upon the ground that give this picture a special touch. My eye travels around the picture and sets my mind to begin telling my own story. But wait, there's your story unfolding. The essence of courtesy and kindness is not to make others feel out of place, and so perhaps Huffy Lady's rude behavior got her exactly what she deserved. Your writing, describing the events and details, without forced conclusions, is compelling . . . the story drew me in and I want to hear more!

Enjoyed your coffee shop visit. My husband shakes his head when he encounters a young adult unable to count change.

I always enjoy your coffee chronicles. I love the details that bring me into the story and make me feel like I am sitting right there in the shop. The counting out change thing... my daughter is terrible at simple math, she gets an A in prealgebra but is calculator dependent for the most simple problems. Her friends are the same way, smart but calculator dependent. They let the kids use a calculator too early and they don't need to know the simple math. Since they don't use that knowledge, they forget the simple math that should come quickly without thinking. I think I see math flash cards in my daughters future...

Hey, you were there first. I don't blame you for taking it since the sunny seat was hot. Nice post... story next?

I just love that statement, "Rather nondescript people not worthy of a story." For some reason, I have a feeling there will be a story about them at some point. :)