The Coffee Shop Chronicles - No. 28

I recently overhead my husband say to one of the salespeople that he manages "I find new prospects exciting and intriguing". He is in the janitorial and packaging supply business. He thrives on "cold calling". He thrives on getting his foot in the door of someplace new and hopefully walking away with some new business.

I also find new prospects exciting and intriguing. I am in the adventure business. I thrive on photographing new locations and getting my foot in some forbidden doors, hopefully walking away with an amazing photograph, or at least a good story.

When the opportunity presented itself to accompany my husband on a recent business trip I jumped at the chance. He had to go to my one of my favorites places on earth, Traverse City, MI, for a couple of days to work with his salespeople there. I would have the days to myself to wander and photograph to my heart's content, the nights we would be together, instead of having sad, lonely conversations on the phone.  There was one small glitch in this plan though, we were going to Traverse City via Toledo, OH, which makes absolutely no sense except that he had a very important meeting there. So we would be driving 3-1/2 hours southeast of our home to Toledo and then driving five hours northwest to Traverse City.

I have never been to Toledo so I was game even if it meant a long day in the car. There is something so exhilarating about crossing a state line, like I have suddenly found myself in a foreign country. Although it really doesn't look any different than the country I just left behind. Maybe it is seeing different license plates on the cars, maybe it is seeing new sights, I am really not sure what it is. I do know that I love seeing big cities from the interstate. There is always some cool old brick building that has my eyes glued to my window. 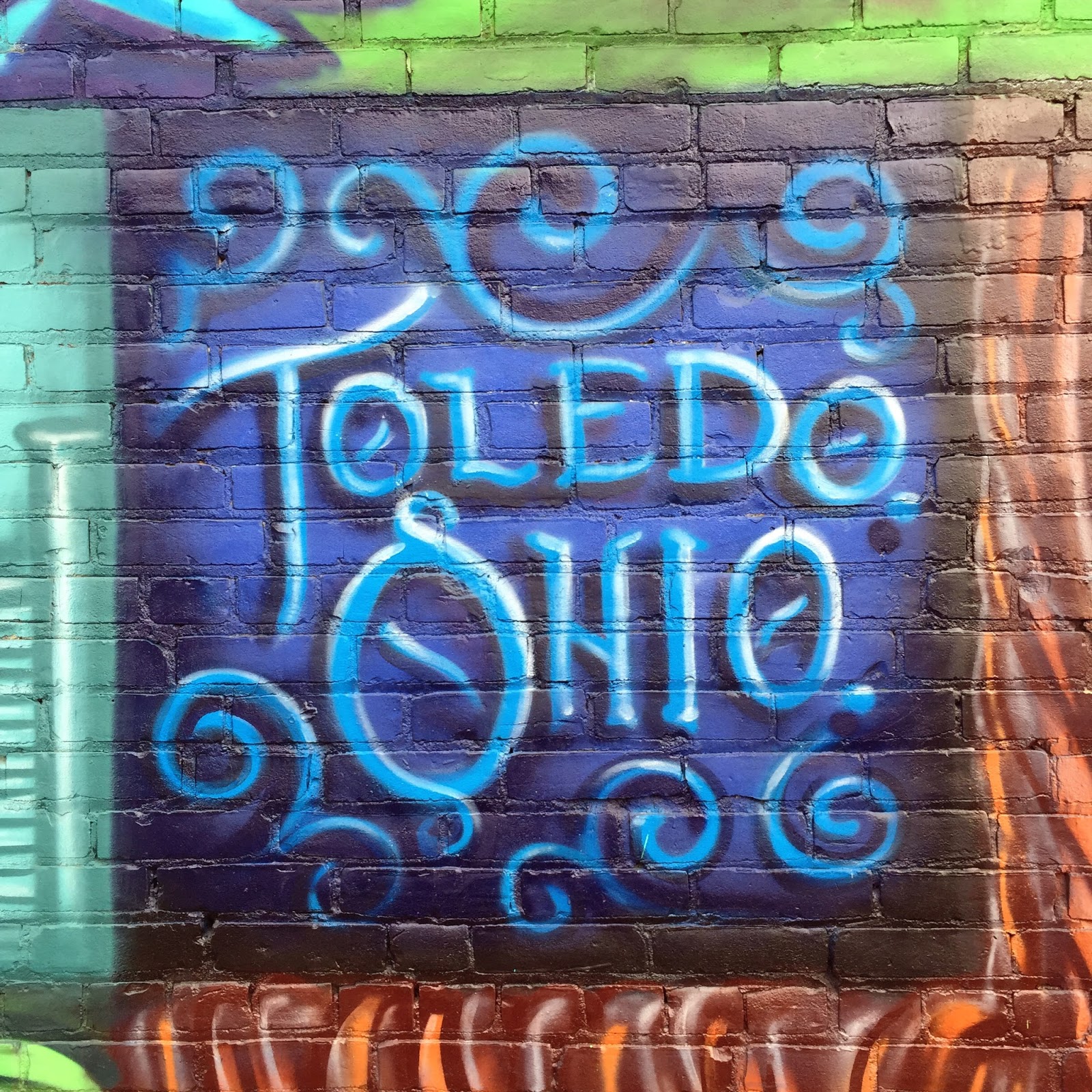 We arrived in Toledo at quarter to eleven. We were early for our lunch meeting with my husband's salesperson. So once we had found the restaurant where we were meeting him, Glen asked Siri for a list of coffee shops nearby. She came back with a few choices and Glen started reading them to me. I stopped him after the first one, Black Kite Coffee and Pie, I loved the name. I pick coffee shops based on name just the same way I pick books from the bookstore based on their cover. Sometimes they suck and sometimes they are well worth the chance. 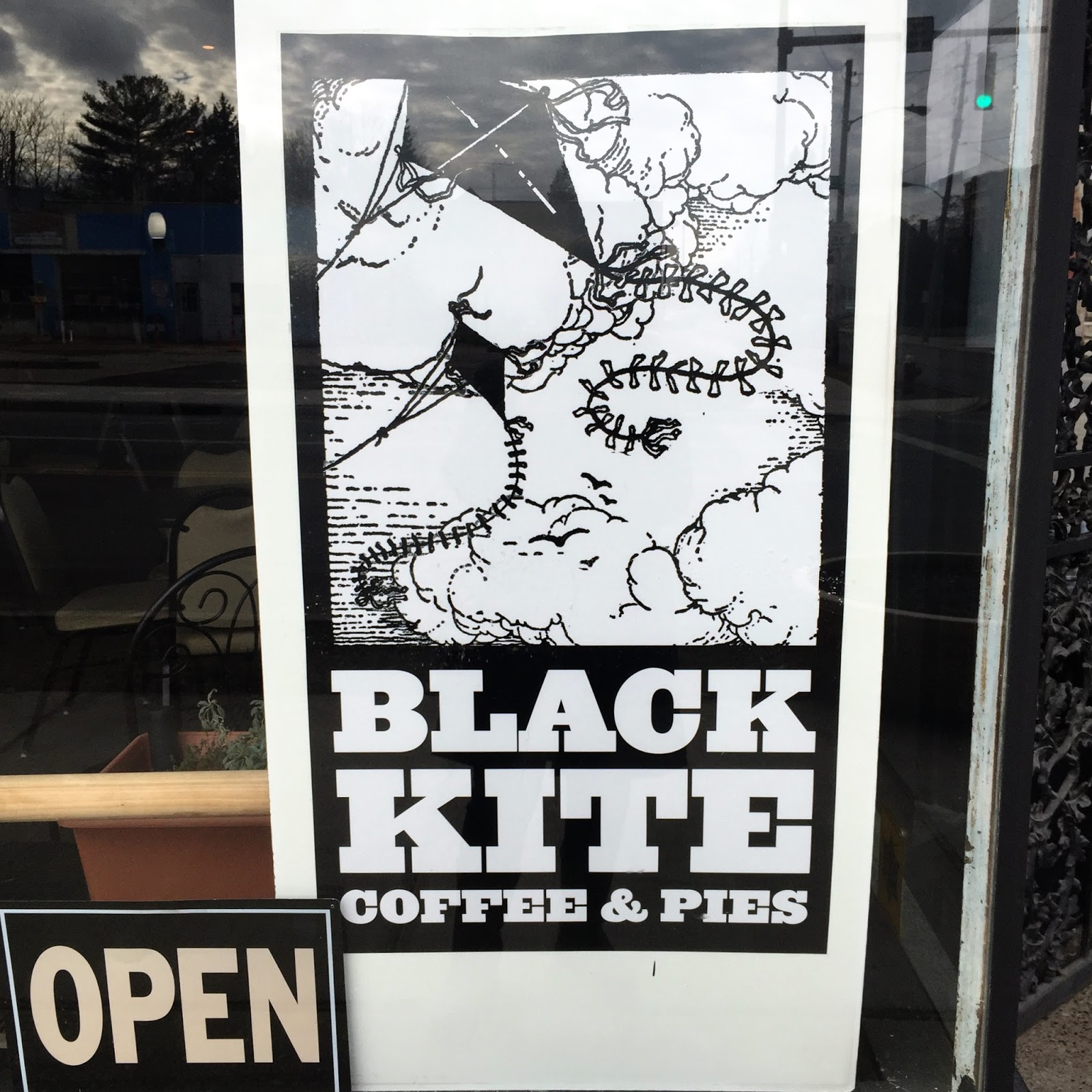 The coffee shop was only a couple miles away from the restaurant so we followed Siri's directions to it. Let me just say that roundabouts are not in Siri's vocabulary so we had a brief struggle but managed to get back on course. Finally back on the road to the coffee shop, we drove past the most breathtaking old stone and brick churches. My favorite one was a cathedral constructed of the most amazing stone, complete with two tall, narrow towers in the front and a stone furnace stack in the back. The massive wood front doors topped by a round stained glass window reminded me of my trip to Paris in 2007 and seeing Notre Dame. The detail, the workmanship that went into that cathedral boggles my mind and gave me that fluttering feeling I get when I see things I want to photograph. 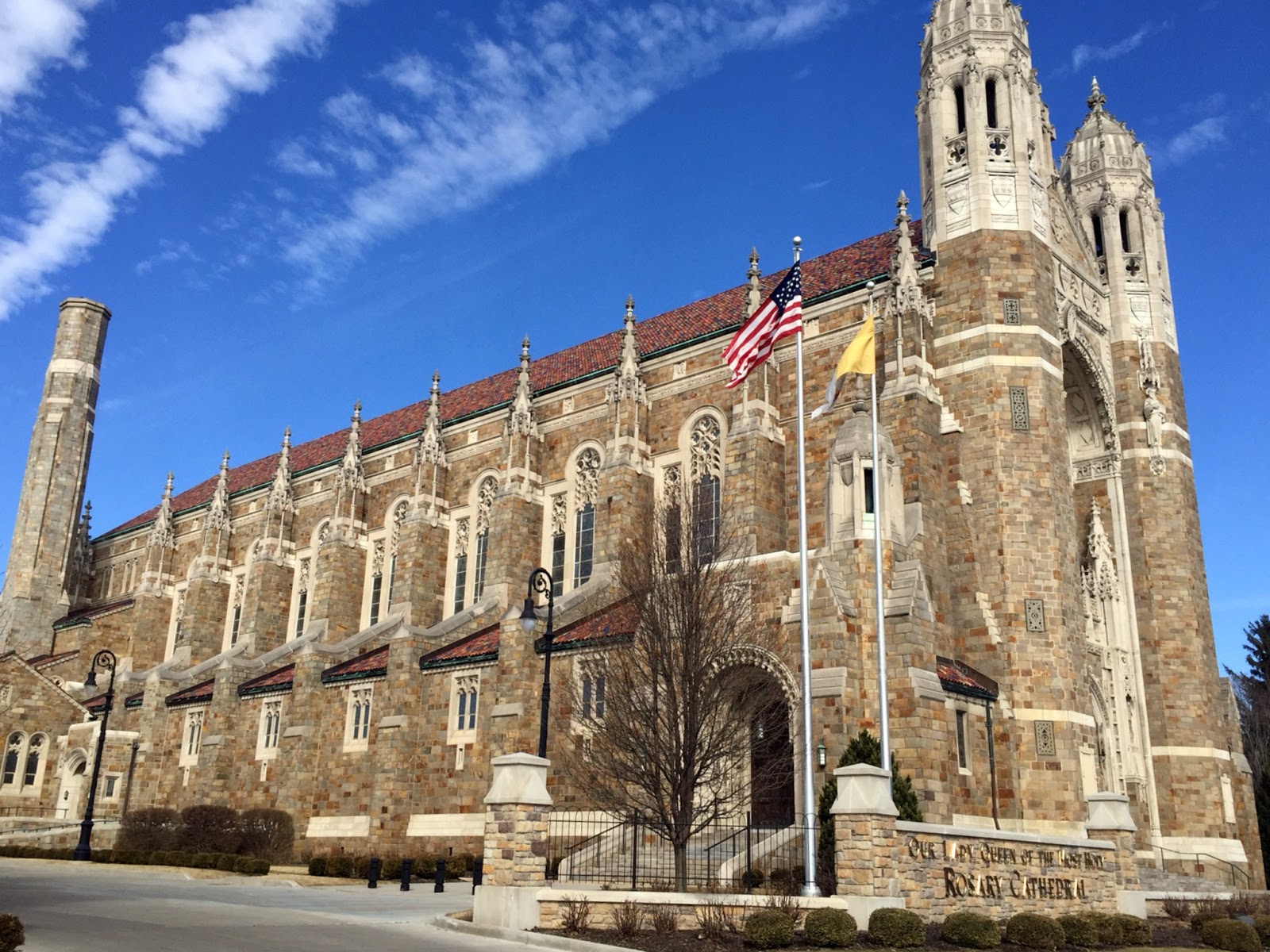 Siri guided us to the next block and sure enough there was the coffee shop on the corner. Glen was a little worried about parking our car around the side of the building where we he couldn't keep an eye on it. We may have passed a house or two that had disheveled front yards and boarded up windows, giving him reason to be concerned. But according to the sign at the corner we were in Cathedral Square, what could possibly happen. We were parked right next to a fairly new convertible VW bug. If I was going to steal a car I would pick the VW any day over our mud splattered, white SUV. I can see myself now, convertible top down, Scout in the backseat, his ears streaming behind him as we cruise down the country back roads.

Semi-convinced Glen put the car in park and prepared to get out. I, on the other hand was already out and striding confidently towards the coffee shop. I was in my element here, coffee shops and old brick buildings, what more could I ask for. 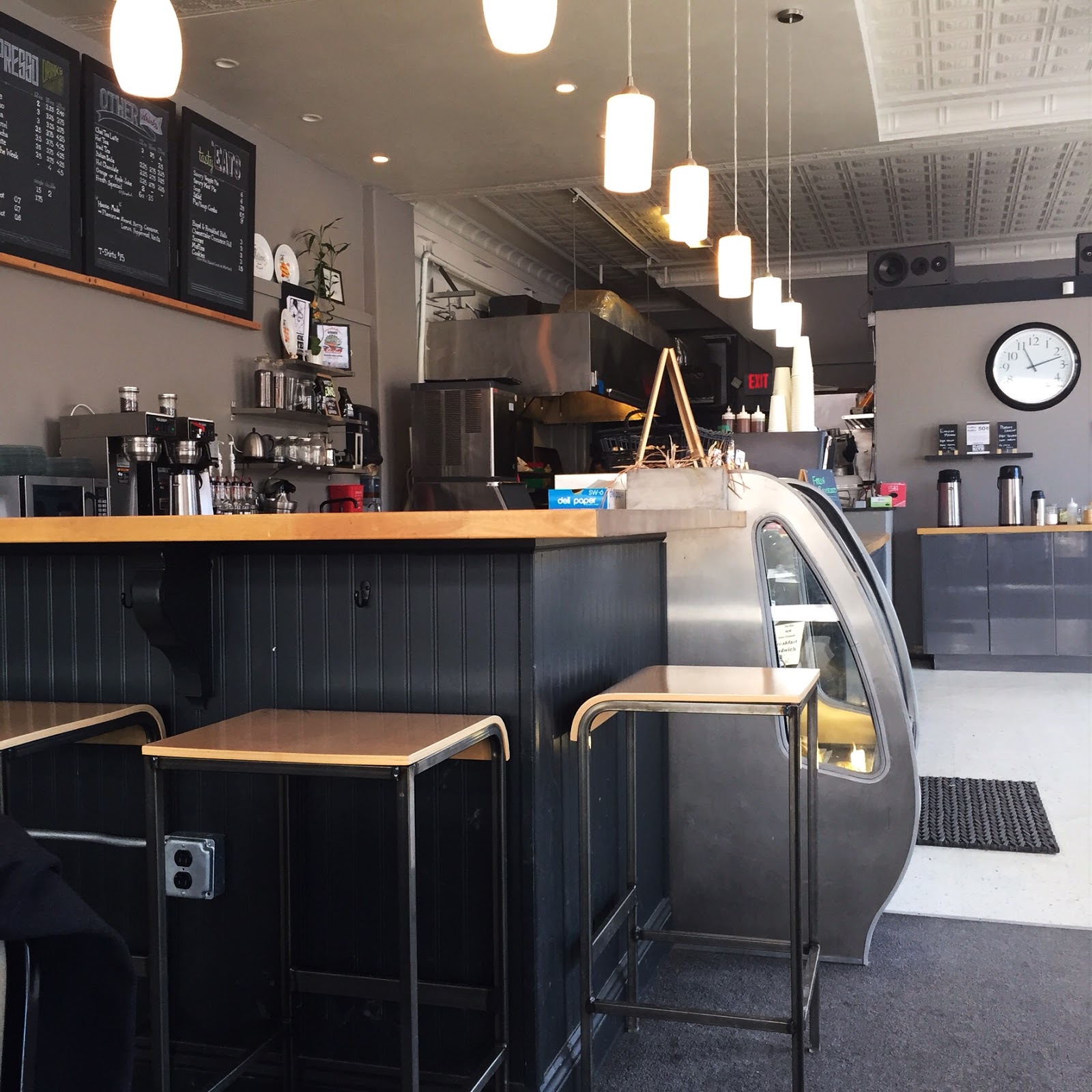 I opened the wrought iron outer door that could possibly be a security door and then turned the knob on the wood and glass inner door. We were warmly greeted by a young man in his mid-20's who reminded me of a shorter, dark haired Shaggy from Scooby Doo. I was very impressed with this young man, he took the time to explain each size drink and was extremely courteous throughout our entire encounter. I ordered my usual Chai and Glen ordered plain old black coffee. Since we were going to be eating lunch soon I wasn't going to get anything to eat, but Glen broke down and got a cookie for us to split. Let me say a jack hammer would have been handy when splitting it. 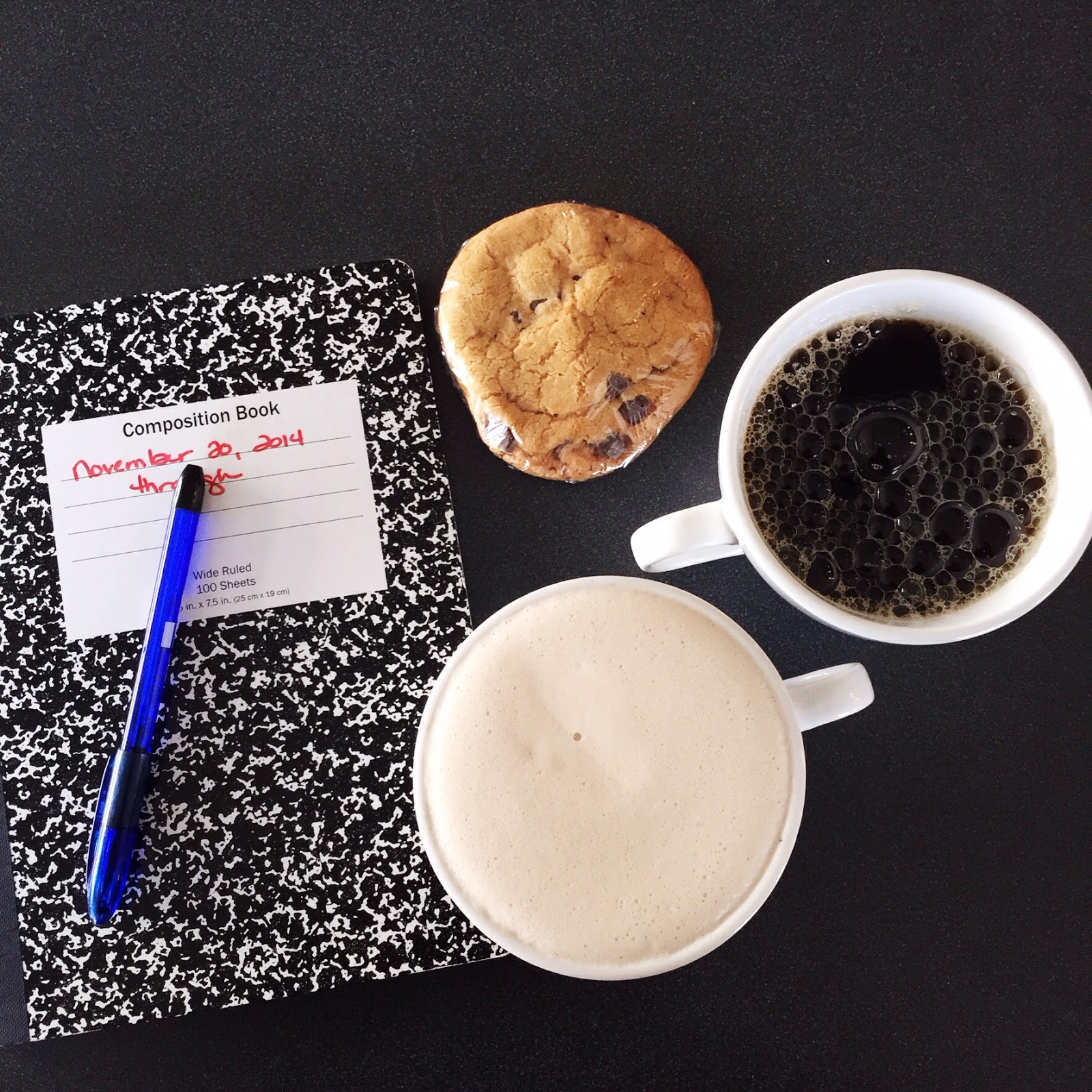 Glen had to pour his own coffee but young Shaggy delivered my chai to the table, how sweet. I opened my notebook and began to record my observations of the coffee shop. Quite a large space, with a bank of big windows letting in lots of natural light. Besides Glen and myself, there were two other customers in the coffee shop. A young woman to my left, who was busy typing away on her laptop and answering occasional incoming phone calls. Maybe this was her office away from home. There was also a young man with dreadlocks slouched on the couch near the front picture window. He had his laptop open but he seemed more focused on the music he was listening to in his ear buds. 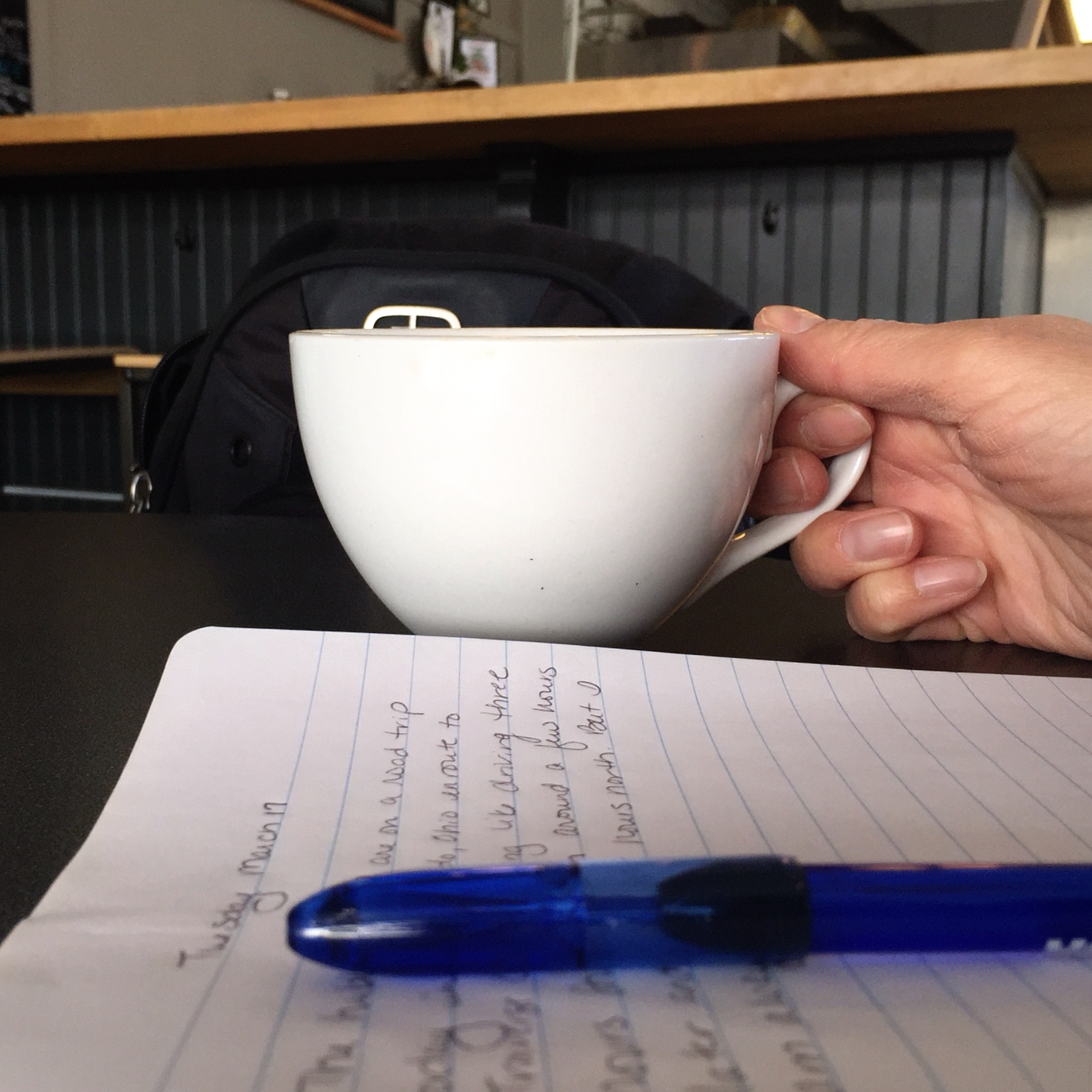 My chai gone and satisfied with the observations I had recorded in my notebook I could hear the beautiful stone cathedral calling me. So I bravely told Glen where I was going, donned my coat and mittens and strode confidently out the door. Usually I get a vibe if a place seems creepy or not right. I didn't get any weird vibes here so I set off down the block to the cathedral. 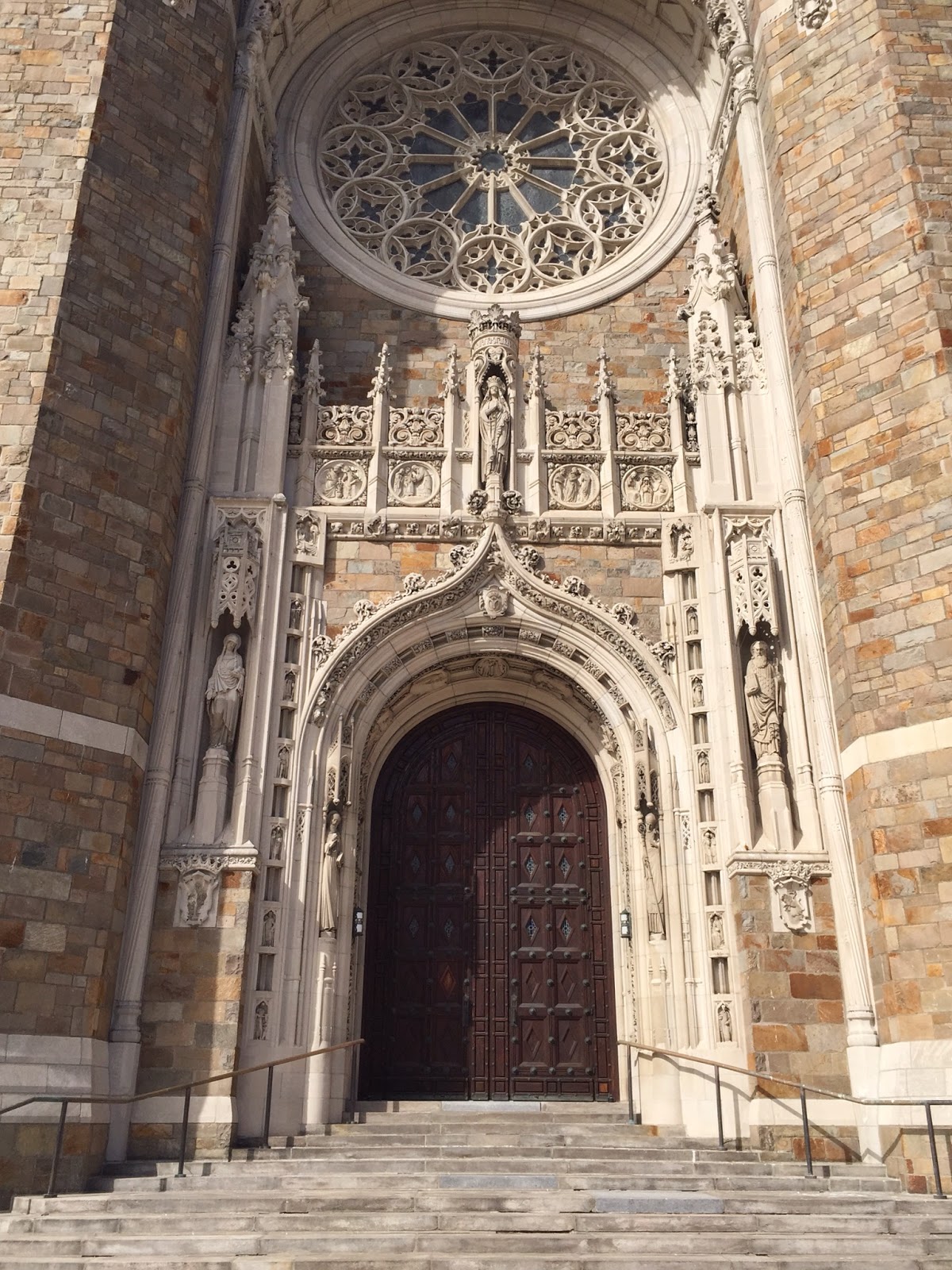 The Cathedral did not disappoint me. Standing in front of those massive wooden doors all I could do was marvel at the architecture and record as much of it as I could with my iPhone.

Finally, hands freezing, I wandered back to the coffee shop. Glen was still working away on his laptop. He looked up as I took my coat off and his first question to me was "Did you look to see if the car was still there?" I replied "No, I did not, but I am sure it is".

The coffee shop was quiet at the moment and I noticed that Shaggy was leaning over the end of the counter looking at a magazine. I decided to stroll over to the bar stool at his end of the counter and ask him some questions. He didn't know me and I would never see him again so I had nothing to lose. As nice as he had been so far I was fairly certain that he wouldn't mind, and he didn't. I told him that I write essay pieces on coffee shops and wanted to ask him a few questions. He readily agreed. His name was Tylor (yes that is spelled correctly) and he had been working at Black Kite for a couple of months. He really likes working at Black Kite, he described it as a pleasant, relaxed environment. Much better than the bar that he use to work at.

I asked him about the area. He actually lives only a couple of blocks away. He said the neighborhood use to be home to doctors and nurses from the local hospital, which explains the grand designs of the old brick houses. Eventually the doctors and nurses moved to the suburbs and the area fell on hard times. He said the area is slowly making a come back one restoration at a time. Such a common tale of once grand urban neighborhoods. I thanked Tylor for his time and returned to our table.

It was time to leave for the restaurant and meet Glen's salesperson, so we bundled up and headed out the door, Tylor busy at the order counter with some new arrivals. Thankfully when we rounded the corner of the building our car was still there and so was the VW bug. 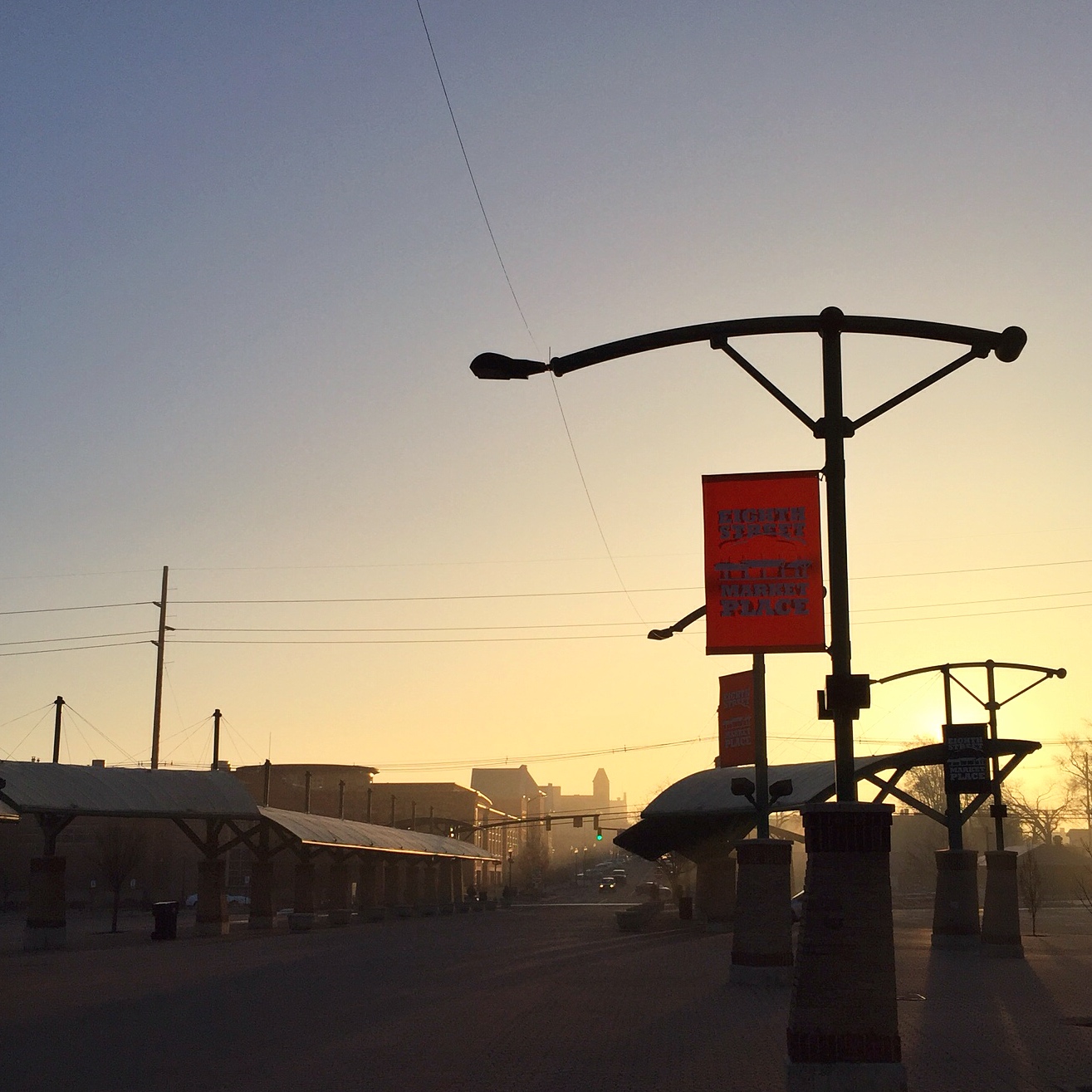 I found beautiful early morning light on our walk downtown this week. 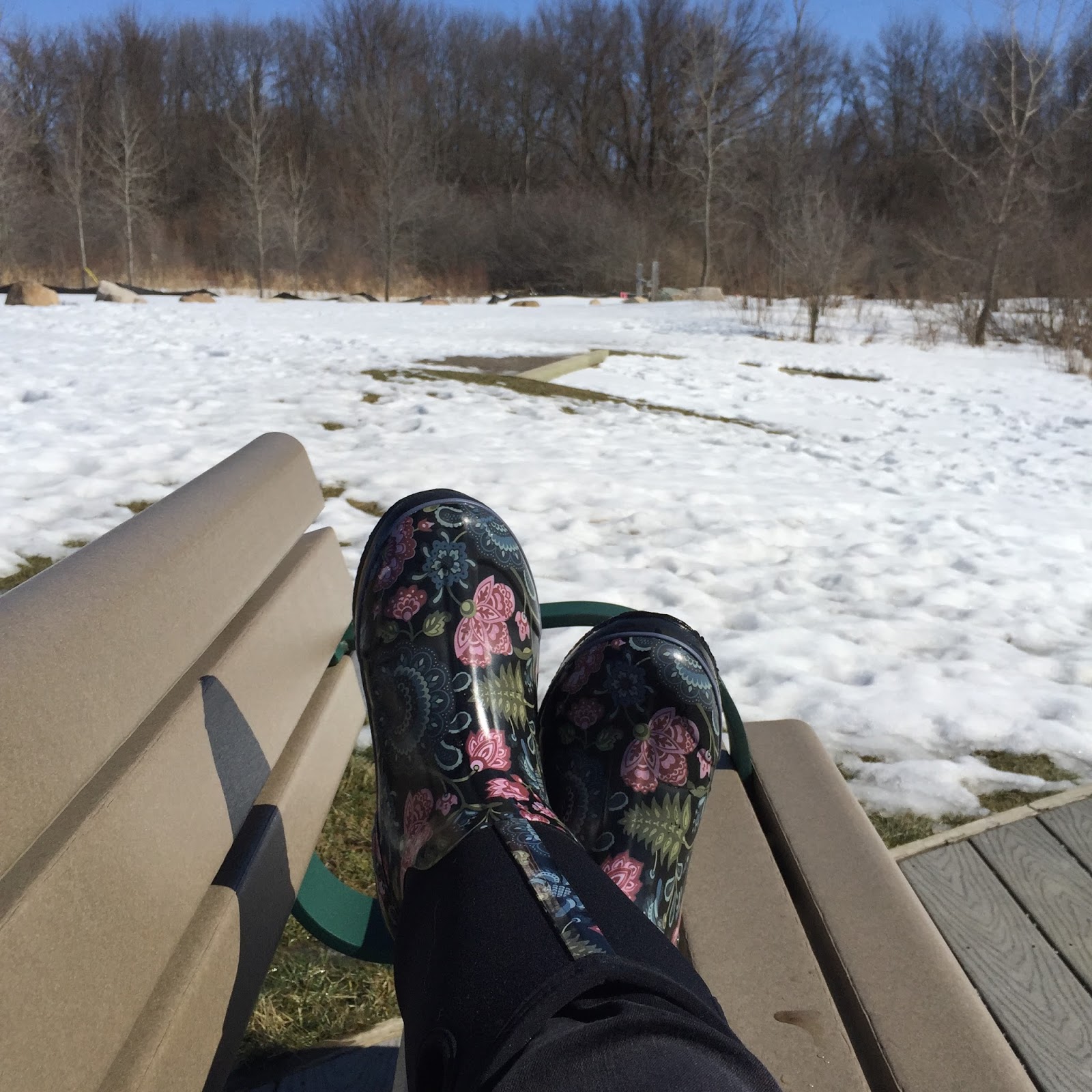 I found a great place to kick up the Paisleys and enjoy the sunshine and 50 degree temperatures. Go away snow! I could have easily taken a nap here. 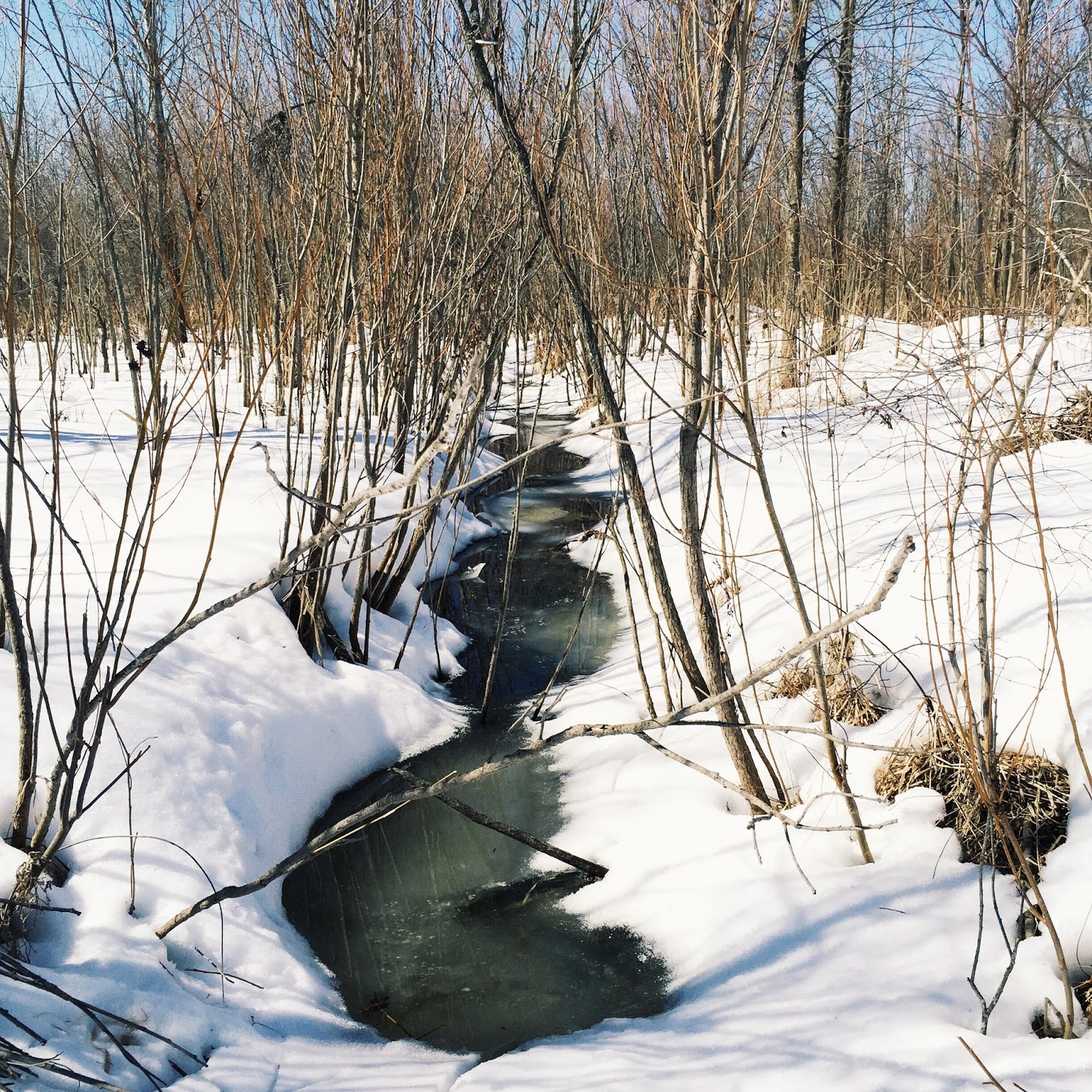 I found a lovely little stream while trudging through the snow around a frozen pond. Always the adventurous one am I. 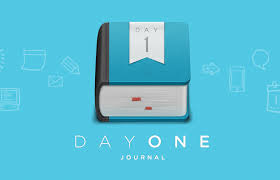 Thanks to my friend Viv, I found the perfect online journaling app for all my Apple devices, Day One. 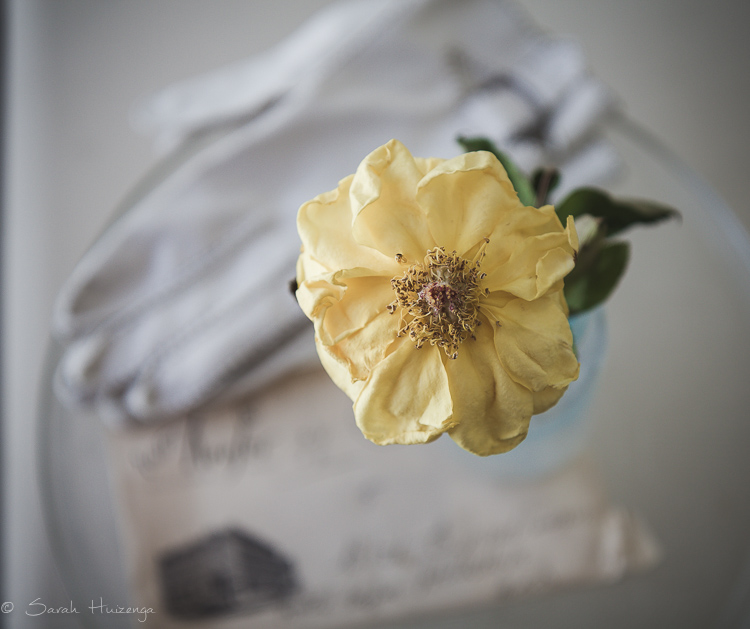 I found this one beautiful fading bloom in the boutique of yellow roses that my dad bought for my daughter while she was home on Spring Break. I loved the way the petals lay open around the center. I paired this bloom with a pair of vintage gloves I found in an antique shop last week, watch for these in future self-portraiture work. I also added an old vintage envelope I had in my ephemera stash. I don't do this kind of still life often but these pieces called to me to be paired together. 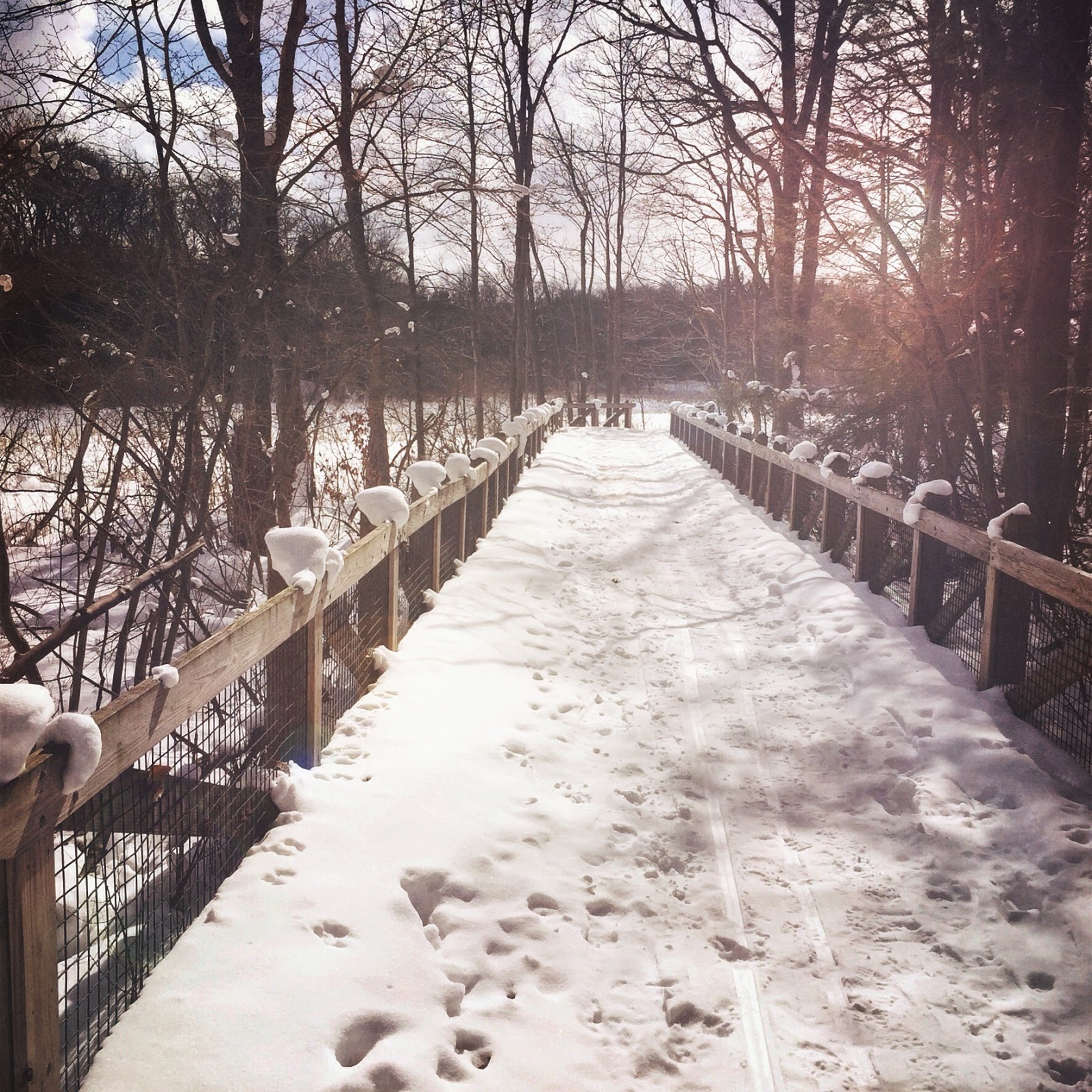 I found sun on a cold winter afternoon hike. 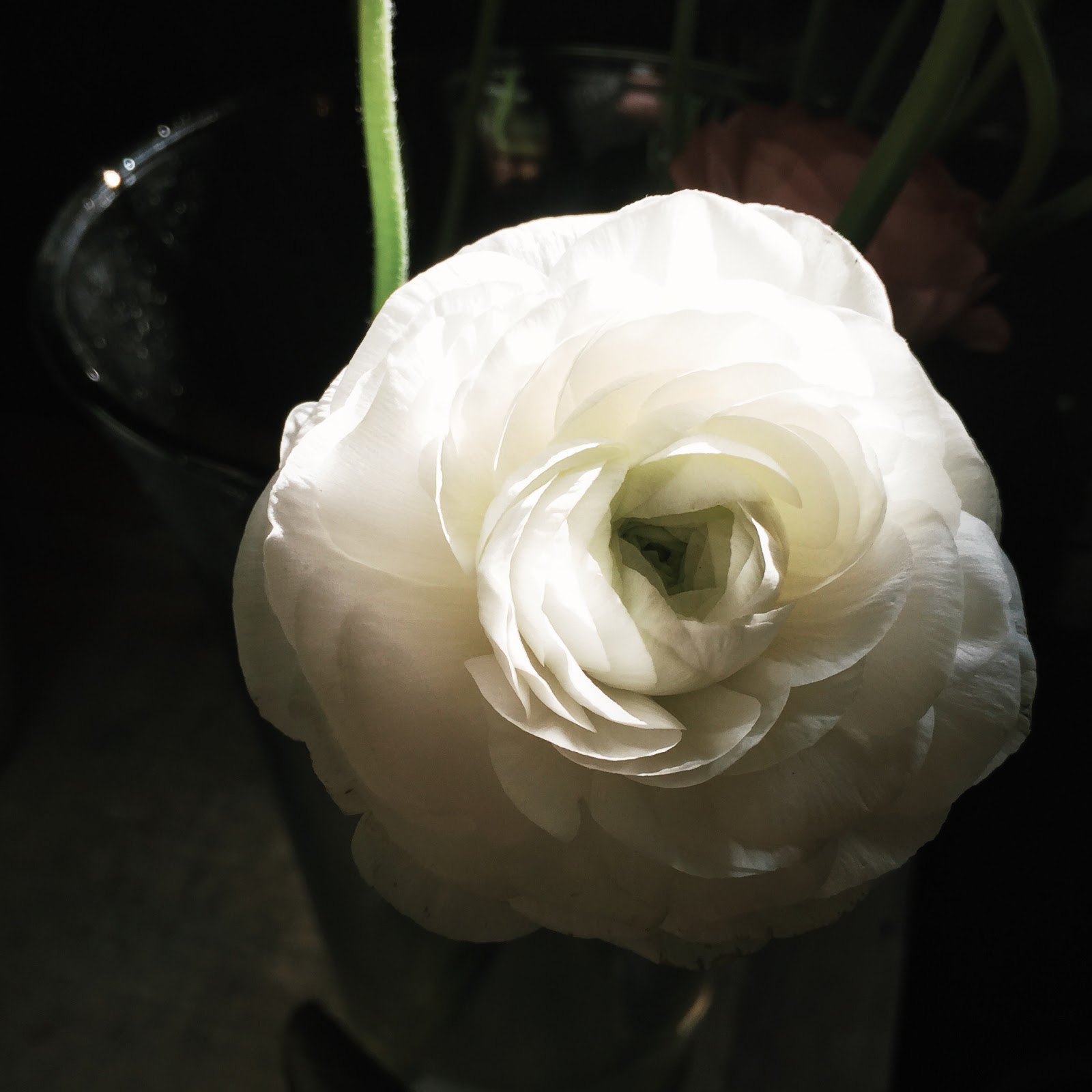 I found a beautiful flower and beautiful light at the local florists shop. 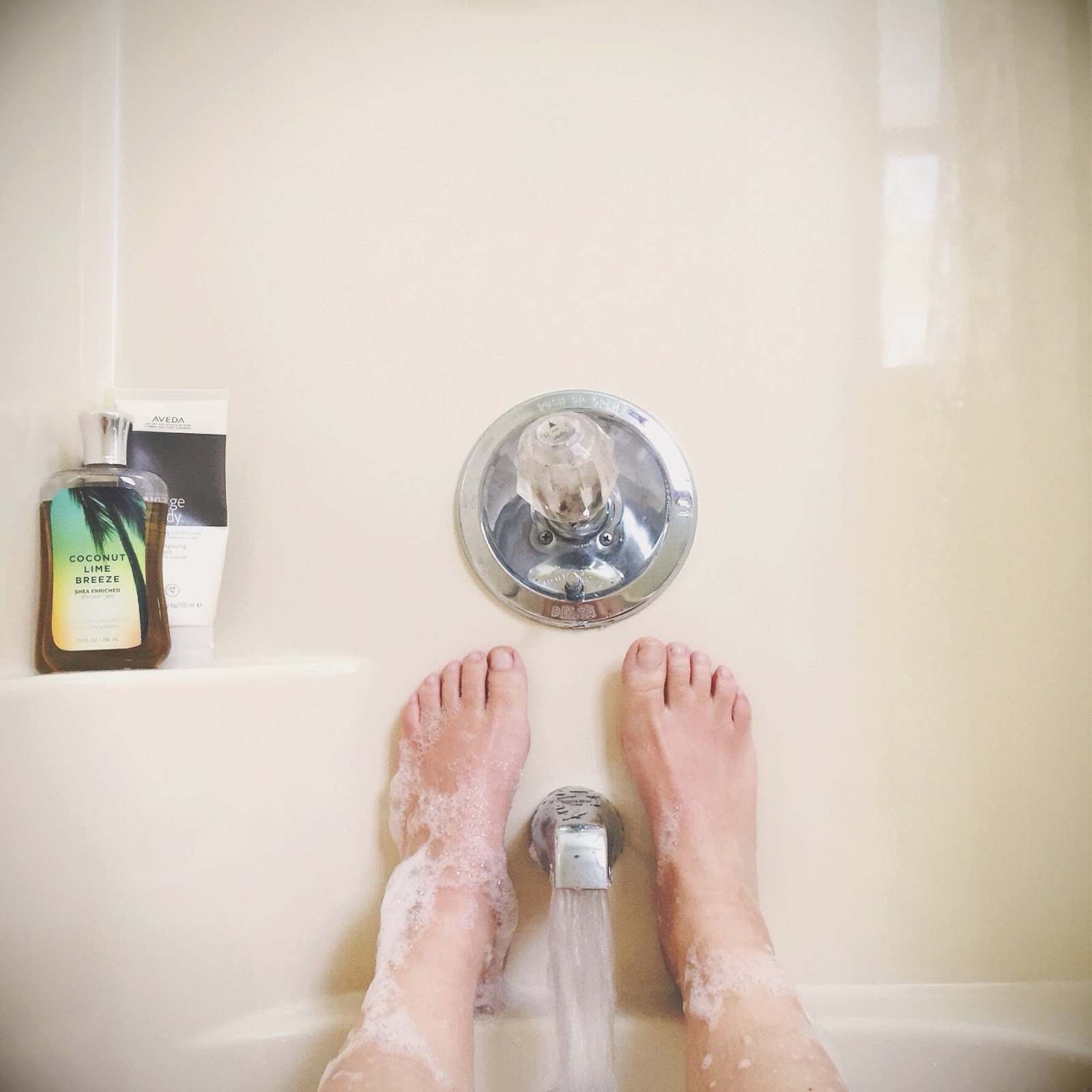 I found an hour to take a bubble bath and shoot the prompt of the day "restful" for my self-portrait photography class. 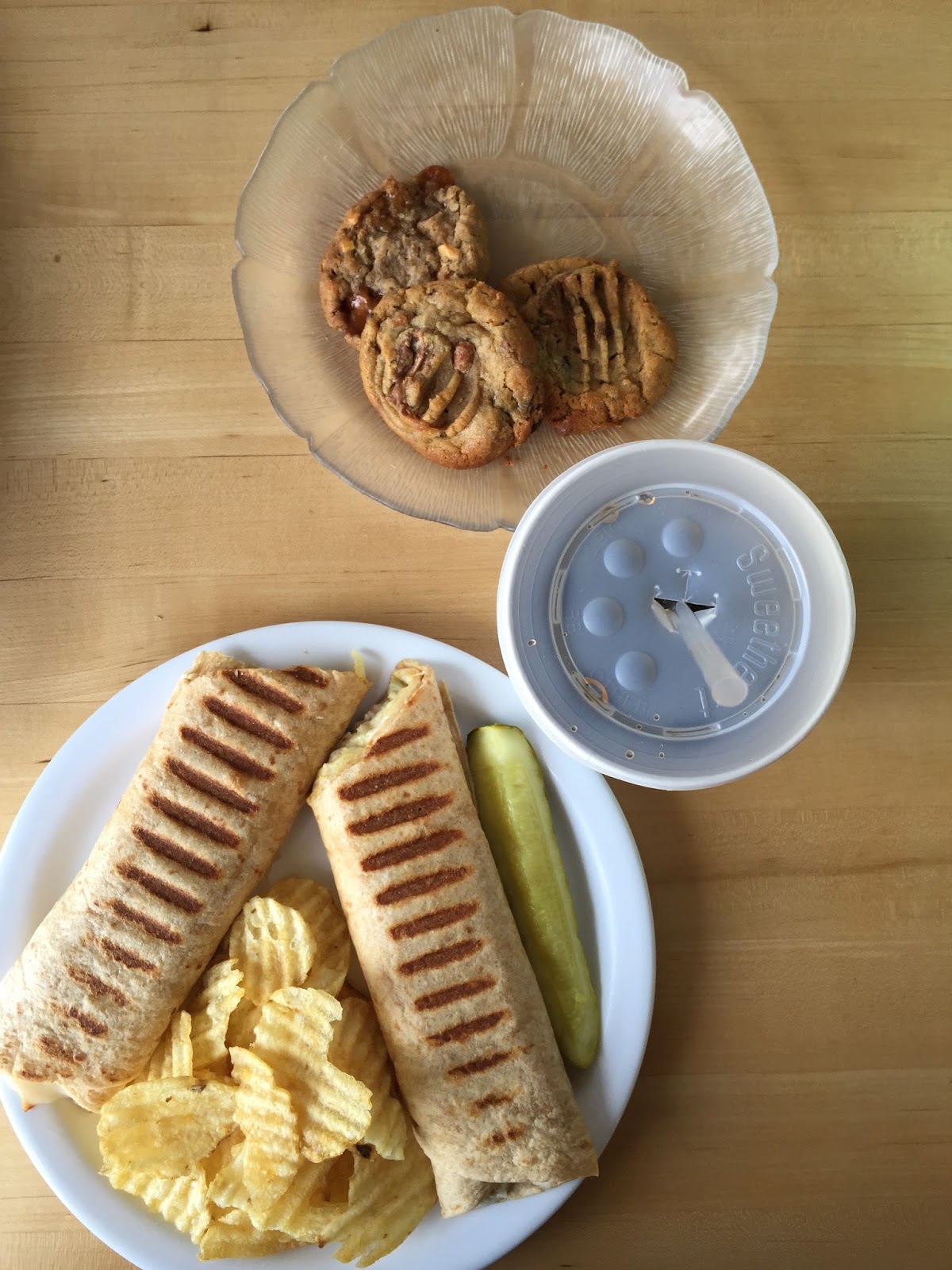 I found great north window light, delicious food and great conversation with my beautiful girl while she is home on spring break. 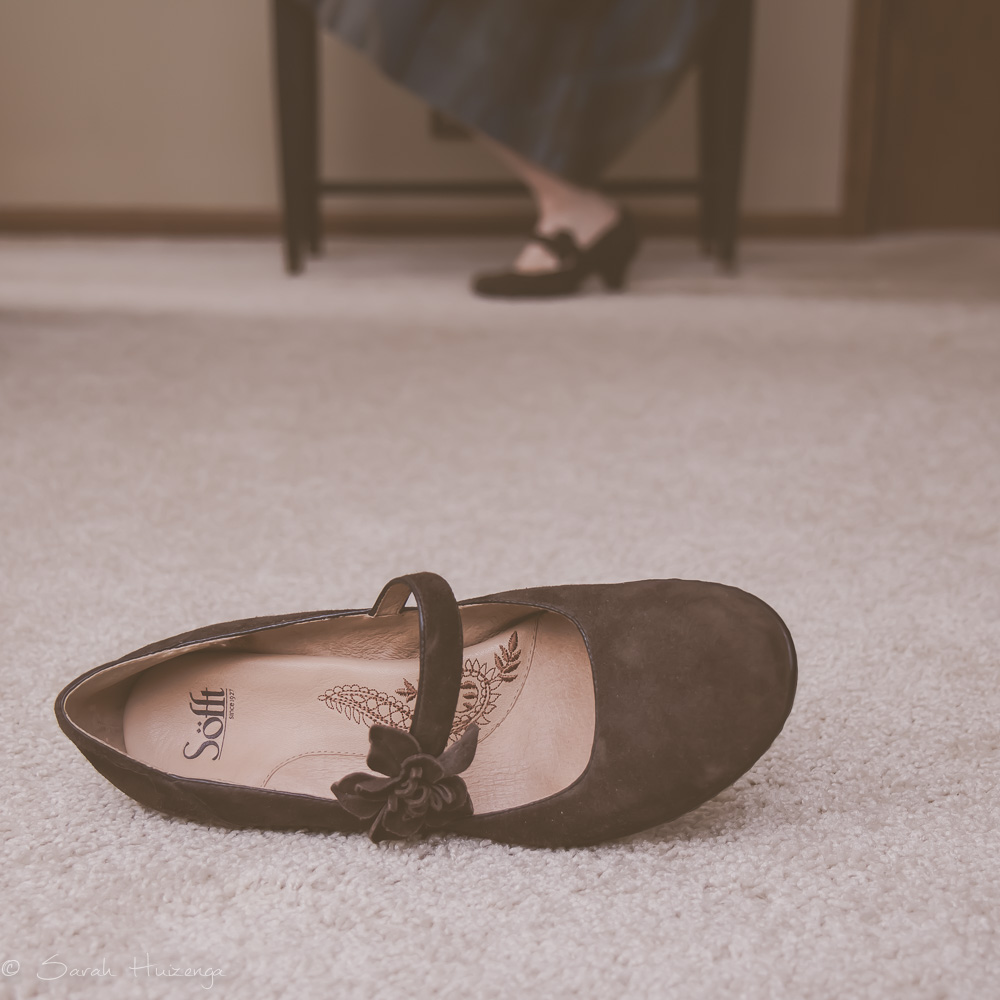 I found a favorite new technique for self-portrait photography, focus and blur. I have a million ideas running around in my head for this technique.