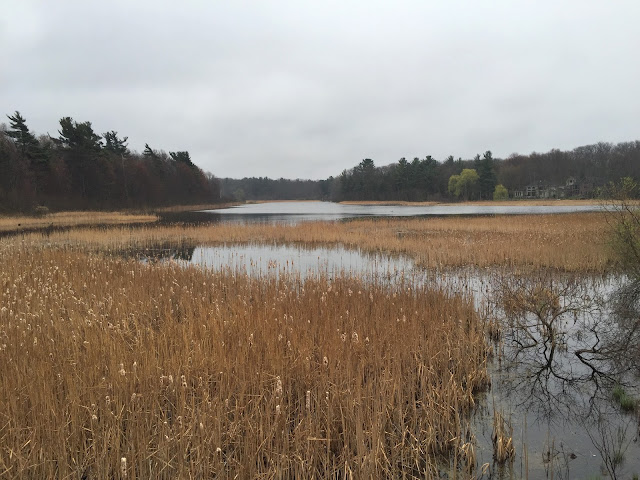 Last summer I got the wild idea that I wanted to walk a nine mile stretch of scenic lakeshore road, segment by segment, between my parents' house (my childhood home) and the cemetery where my grandparents and favorite great-aunt are buried. In July it was too hot to start, so I thought I would wait until fall. Fall came along with cooler weather, but I was also doing a lot of traveling, so the nine mile walk never began. 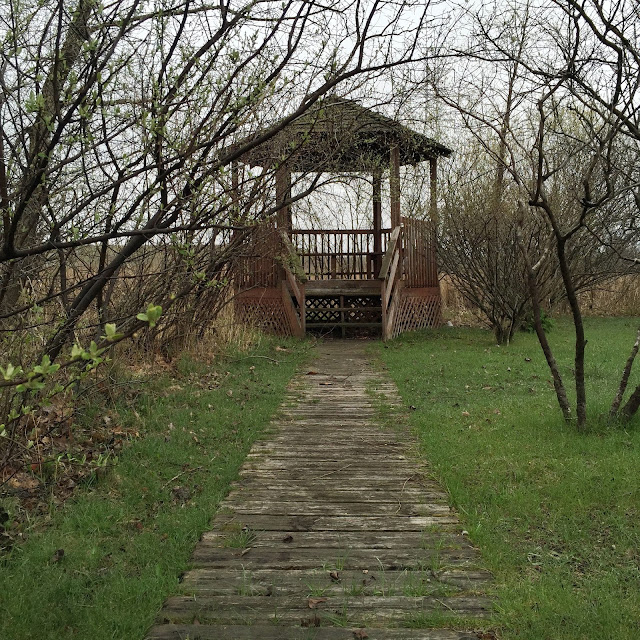 Maybe it's the spot that I am at in my life that has me yearning to revisit childhood places. My child raising days are behind me, my parents are aging but still healthy, and I am well settled into our thirty year marriage. Or maybe it's the natural progression in the four year, self-discovery journey that I have been on. 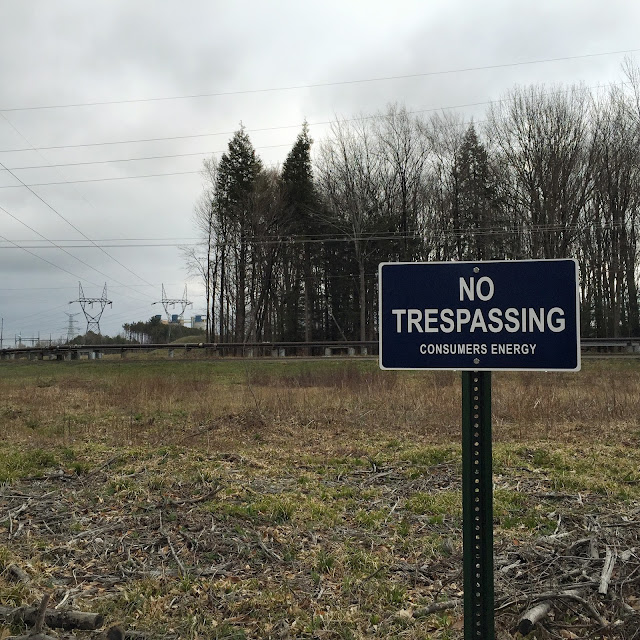 Some ideas seem good but then quickly fade if not acted upon immediately, but the need to do this walk has only grown stronger. So now, almost a year later, I am beginning. I still plan on doing it in segments, parking my car, walking a mile or two, and then walking back to my car. In the end I will have doubled my nine mile walk. 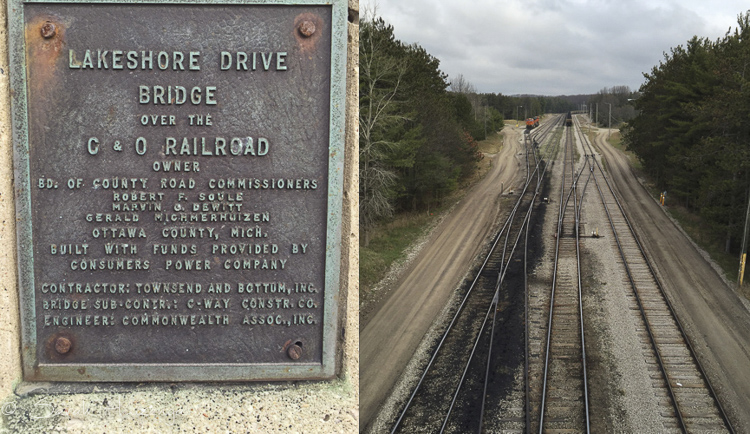 So much of my history is located along this road, favorite parks, including the one where I love to do self-portrait photography. There is the former house of friends of my parents, many Sunday mornings after church we would go there for coffee or tea in delicate china cups, and nibble on sugar cookies. This house had unique nooks and crannies, being built by the owner, that I loved to explore while the adults chatted in the kitchen. I think this is where my love of buildings began. 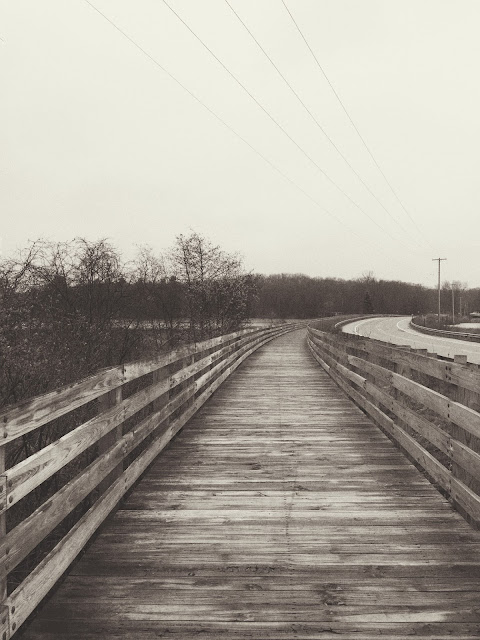 I have ridden along this stretch of road hundreds of times, but I have never walked more than this bridge section. There is something about walking that forces you to slow down and truly see what is around you. I am excited to see what memories this nine mile journey uncovers. I am hopeful to complete it by October. If I get it done sooner, maybe I can find another memory lane to travel down.

Posted by Sarah Huizenga at 1:00 AM 9 comments: 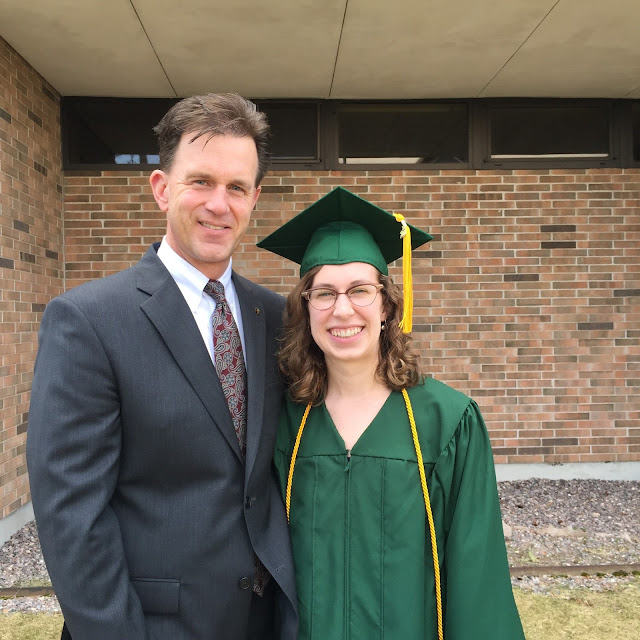 Last spring when our daughter Mallory was finishing her last semester of college, she was debating where to live after college. Either move three hours away from home, where she had received a job offer, or move back home, uncertain about a job, but with a free place to live. I encouraged the moving back home with the offer that I would consider adding a second dog to the family. She was very determined to get a dog of her own.


We had lost the family golden retriever Riley, who was her dog, the previous autumn. Thankfully, we still had his younger (only by six months) brother, Scout, but it still took time for all of us to heal from the loss. By spring we were closer to being ready to consider the possibility, especially knowing that Scout was 12 and his hips are not in great shape.


The dangling dog carrot must have worked because she did move back home, and found a job within a week of being home. I was thrilled to have her back, after her being gone for the past four years. 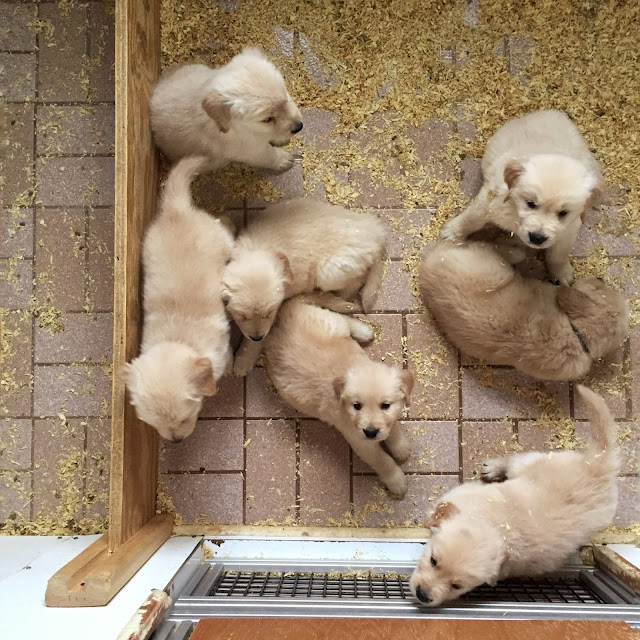 The conditions of the new puppy were - it was her decision, her money. She did a lot of research, debating between a Bernese Mountain Dog and another Golden Retriever. She talked to different breeders. Ultimately it came down to a local friend I had made on Instagram (who I had never personally met) had recently gotten a golden puppy. I messaged her for the breeder information and passed it along to Mallory, the rest is history. 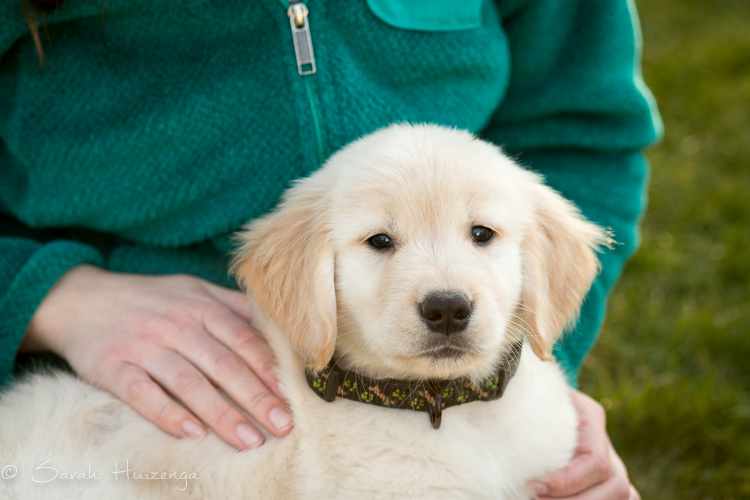 In the litter he was known as Light Blue, because of the light blue collar he was identified by. He stood out to Mallory from the first photo she saw of the litter at two days old.


The breeder matches prospective owners with puppies based on what they are looking for and the personality of the puppy. Mallory had no idea if she would get light blue, but he always seemed to make himself known to her each time she visited. 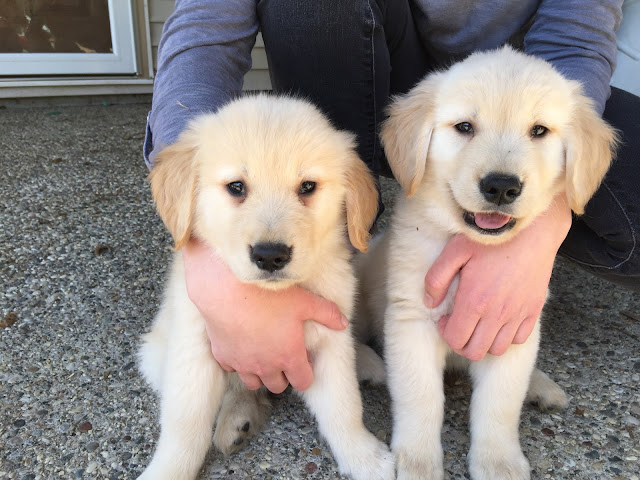 On pickup day, Mallory still didn't know which puppy would be Findley, the breeder was debating between a couple for her. The two that the breeder brought out for her to decide between were Royal Blue and... Light Blue. That didn't make her decision any easier, they were both so cuddly. In the end she went with her heart and chose Light Blue. He was the one that had stolen it from the very beginning. 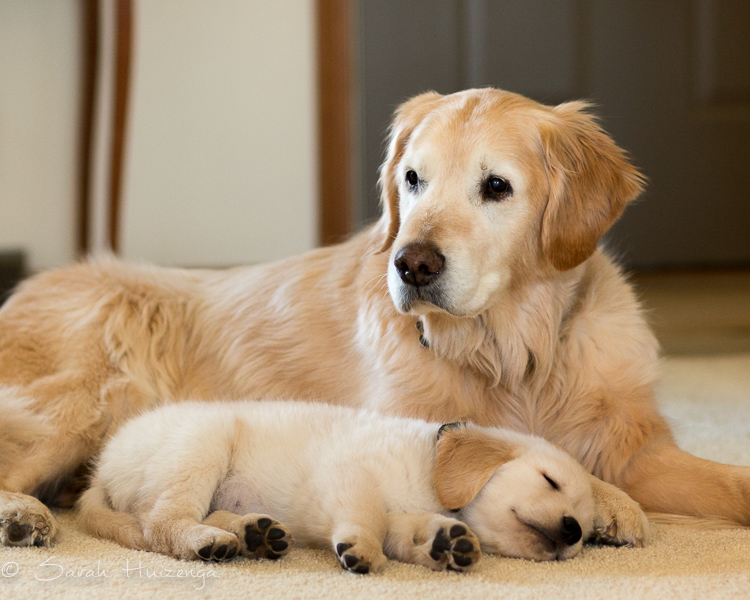 The introduction of Findley to Scout has gone extremely well. I think Scout is thrilled to have a friend again. He is definitely more perky and wants to be outside to play with Findley. This won't cure his hips, or turn back his age, but it does make his days joy filled again. 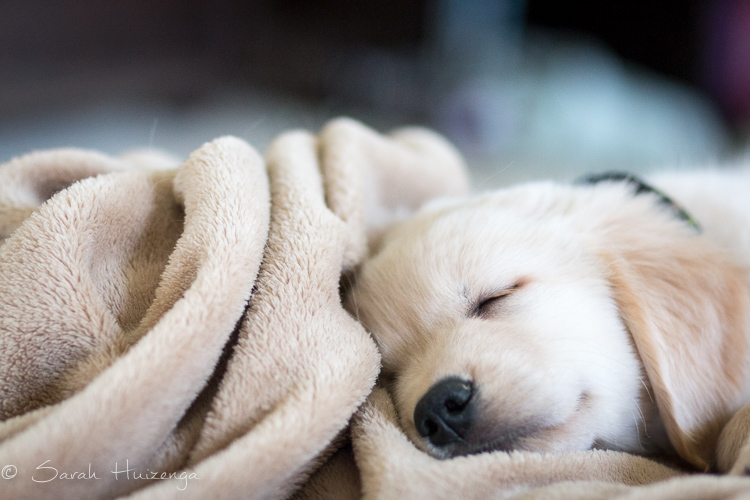 Someday, Mallory will move out on her own. I will worry a lot less about her knowing that Findley is there beside her as companion and protector.
Posted by Sarah Huizenga at 1:00 AM 14 comments:

I stood next to the thin plate glass window, watching the unrelenting rain pound the pavement outside. I heard the hiss of car tires approaching long before I actually saw a car. I looked to see if the window was open, but no, this window did not open. The damp chill from outside had penetrated the brick walls of this old furniture warehouse that has been repurposed into an antique mall. I pulled the zipper a little higher on my North Face winter parka. 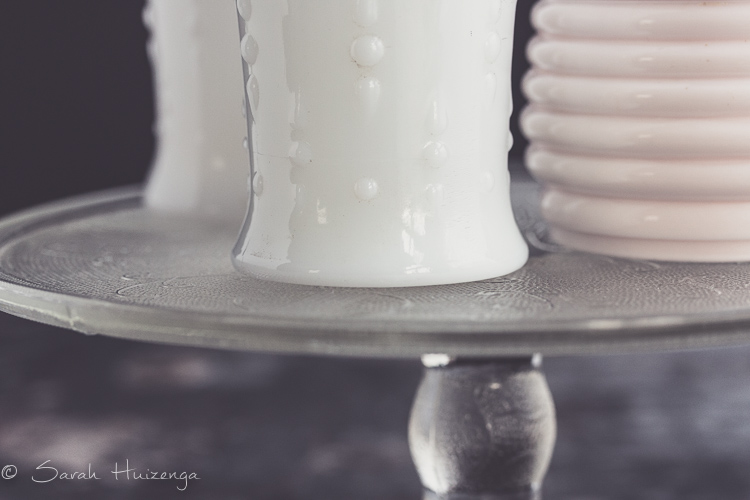 The gloomy weather outside made it the perfect day to be exploring the endless maze of aisles of the antique warehouse with my friend Kay. Neither of us were looking for anything specific. Although she did have a daughter getting married in a summer wedding a year from now, and single-bloom milk glass vases were part of the table centerpiece design. I had a Kentucky Derby party to go to at the beginning of May, if I could find the perfect black, wide-brimmed, floppy hat with a long curving feather, that would be like finding a rainbow after a thunderstorm. 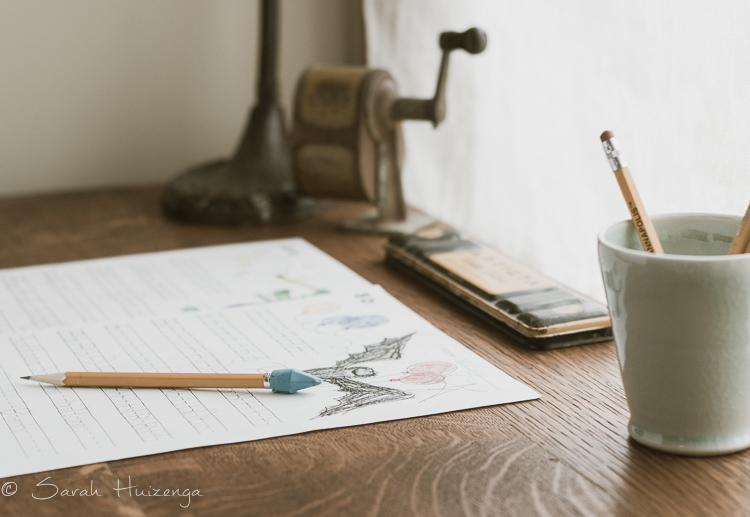 Of course, I am always on the hunt for photography props or something that stirs a story within me.

Nearing the last aisle, and anticipating eating lunch in a warm restaurant, I started to hurry towards the check-out counter. But out of the corner of my eye, on a home improvement store, snap-together plastic shelf,  I spotted a nearly full, open cellophane wrapper of lined paper lying on top of a collection of mason jars. It was the kind I had used in Kindergarten and First Grade when I was learning to write the letters of the alphabet. The light blue dotted line sandwiched between the solid pink and blue lines brought back the memories of yellow No. 2 pencils, Elmer's glue, and rubber cement. This packet of paper had the appropriate yellowing and staining from having sat on a shelf in a school storage room for the past twenty years. This was not a reproduction. 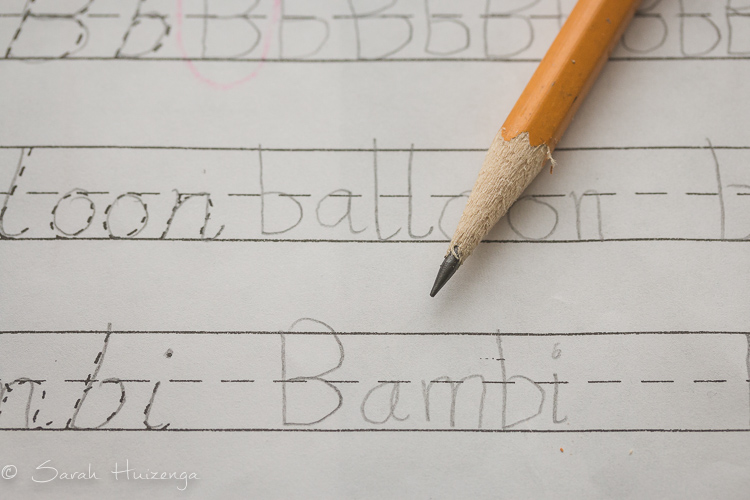 Seeing that paper reminded me of making loopy b's and f's, the frustration of trying to make a cursive G, something that I still struggle with today (not good for somebody with a husband named Glen). I thought about how my handwriting has evolved over the past forty years, yet some parts are still the same. That paper made me wonder if kids still use those blue and pinks lines to practice their alphabet, or if everything is done on the computer these days.

Holding that open cellophane package of paper in my hand, I debated over the $2 price tag. What would I do with it? It would be just another thing to stack on my own overflowing shelves of milk glass vases, mason jars, and old tea cups. So I returned the paper to the shelf, gathered the milk glass vase and 1930's Eastman Kodak camera brochure I was purchasing and walked towards the lady and her space heater at the check out counter. 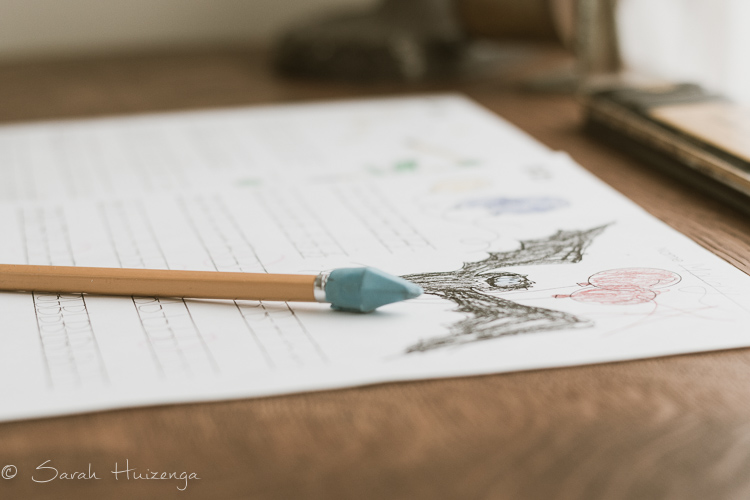 If only life was that easy, to walk away from a found treasure and forget about it. But that is rarely the case, and that pack of lined paper has stirred something within me.
Posted by Sarah Huizenga at 1:00 AM 13 comments: