Losing the Nuts and Screws in Gary, Indiana


"Some towns are as imperiled as the family farm, as sitting down to dinner together with the family. Many beautiful, important places are being lost; a few will be saved. In your lifetime you have likely seen small towns crumble like sand castles on the beach."


Gary, Indiana is a town of loss. The loss of the steel industry that formed it in the first place, the loss of  The Jackson Five, the loss of Michael Jackson, the loss of over 100,000 residents in less than thirty years. Loss of money, jobs and self-worth is visually apparent everywhere.

Before going to Gary I didn't do any research, didn't look at any photographs of either prosperity or decay. I wanted my experience to be uninfluenced by others.

But since I have been home, tucked safely into my suburban neighborhood, I have been doing plenty of reading about Gary. It is a sad tale.


Gary is situated squarely between Chicago and the Indiana Dunes National Lakeshore, and sits on the edge of Lake Michigan. Sounds like a tourist and summer people mecca, it is anything but that. Gary has lived and died with the steel industry. Summer people want cottages on the lake, not air polluting steel mills.


Gary was founded in 1906 by The United States Steel Corporation. The city was named after Elbert Henry Gary, the founding chairman of United States Steel Corporation. The steel mill provided ample employment, especially for immigrants newly arrived in America. The city's population almost doubled in the 1920's from 55,000 to just over 100,000 residents in the 1930's. It reached its peak in 1960 - 178,000. And then began the decline due to the competition of overseas steel production. By 1990, the population was down to 116,00 and in 2010 it was only 80,000.


Due to loss of residents: schools started to close, hospitals closed and many homes became vacant. At one of the locations where our group was photographing, a gentleman on the Gary Demo Crew happened to drive by, and was curious about what we were doing. In talking to him about the abandoned places, he mentioned that there are over 10,000 properties on their demo list.


One place that I am thrilled hasn't succumbed to the wrecking ball yet, is the Gary Screw and Bolt Factory. Built in 1910 and opened in 1912 with 100 workers, a tenth of the workforce it eventually employed. The plant prospered through WWII and beyond, but the recession of the 1980's put the screws in the coffin. The plant closed in 1986. 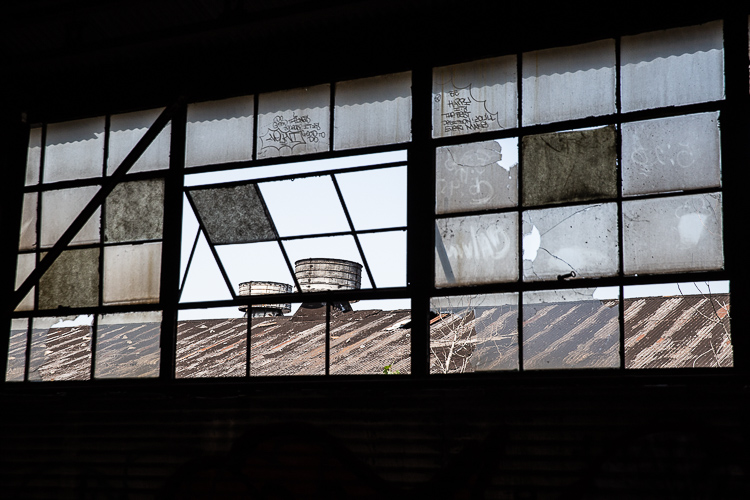 This factory was my dream place to photograph. An abandoned structure full of wide open space, plenty of natural light, and dark stairwells leading to building connecting tunnels with heart fluttery windows. I have a thing for windows. Some might call it an obsession. 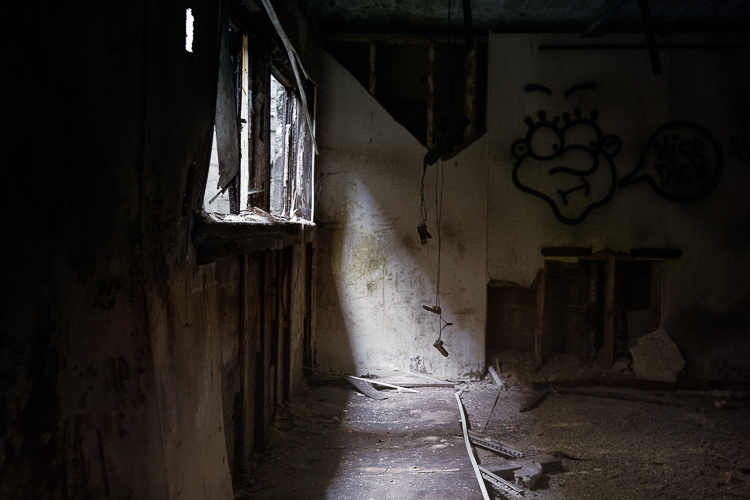 Back at home, reading through these articles of loss and hardship, I began to wonder about my delight in photographing abandoned buildings. But as I thought about it, it isn't the abandonment that delights me, it is the fact that in spite of the despair, there remains something to photograph. As long as something remains, hope remains as well.
Posted by Sarah Huizenga at 1:00 AM 10 comments:

A Weekend in Gary, Indiana

My husband and I spent last weekend in Gary, Indiana. Now if you are from the mid-west you are probably thinking, what the heck were you doing there? The only things in Gary are danger and abandoned buildings. But if you know me at all, you will also know that I am okay with a little bit of danger and a whole lot of abandoned buildings.

We were in Gary (during the day) for a two day photography workshop with Rad Drew and Sally Meyer Wolf, called Abandoned Gary.

There were fourteen of us seekers of decay. Most of us hailed from the mid-west, but a couple arrived via plane. This photo was taken at the last destination on the second day. We were a motley crew by then: so hot, so sweaty and so dirty. But there were still hugs all around as we parted ways. I can't imagine spending two days wandering derelict buildings with any other group.

This is the second workshop Glen and I have done with Rad. Last summer we did a one day workshop at Conner Prairie near Indianapolis on Mobile Photography. You can read that post here if you are interested.

The Abandoned Gary workshop started on Friday night with a meet and greet dinner. Glen and I enjoyed a date day first, so we trickled our way down to Indiana by way of a few wineries in southern Michigan, and a late lunch at a favorite restaurant - The Stray Dog. We checked into our hotel in Merrillville, had a quick soak in the hot tub, and rested before going to the restaurant. 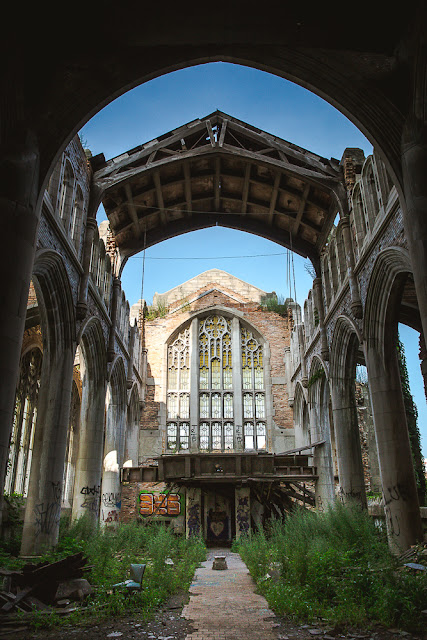 We spent the bulk of Saturday morning here at City United Methodist Church. Built in 1925 for $800,000. It was closed in October of 1975. You can see the destruction that abandonment will do.

The other place that intrigued me on Saturday was Mercy Hospital. A whole hospital completely abandoned.

Nothing left except for peeling paint, trash and dripping water. The dripping water can sound a little creepy when you are on a floor by yourself.


We were suppose to be on the buddy system, except every time I looked around for my buddy husband, he seemed to be MIA. That's because he was busy climbing up on the roof.

This is my favorite shot of Glen's for the day. So I guess the climb up to the roof was worth it, and he did bring me up there eventually. 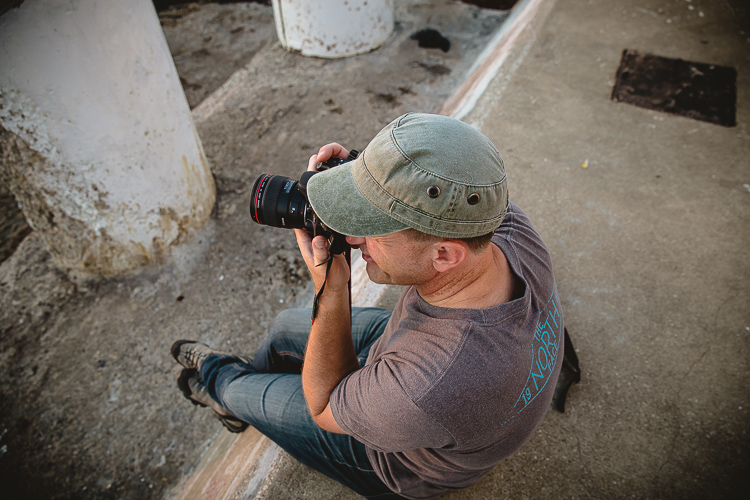 We ended the day with beauty of a different sort. Sunset over Lake Michigan in Michigan City. 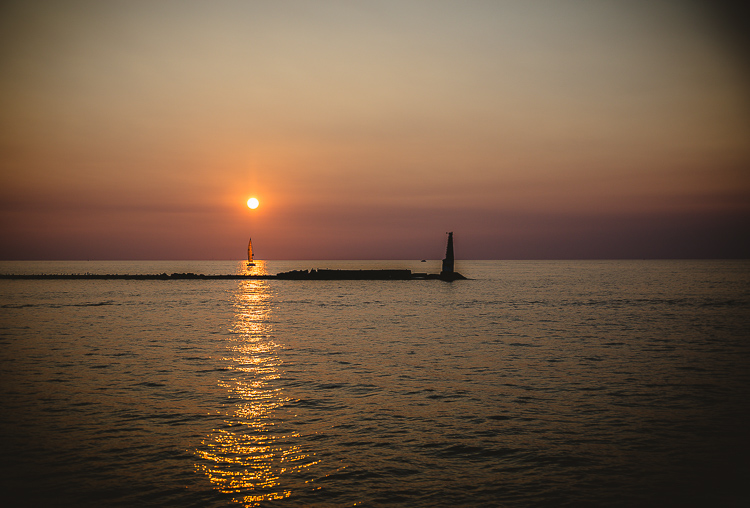 I'll be back with Day Two and my favorite place from the workshop...