I am taking Vivienne McMaster's Be Your Own Beloved self-portraiture class right now. This class is just the spark of creativity I needed this week. Faced with day after day of snow and cold, I needed something to make me pick up my camera. Each day we get a prompt to somehow include ourselves in the photo. Thursday's prompt was a photo walk around our neighborhood and include our hand in the shot to showcase things we found on our photo walk.

Did I mention earlier the snow and the cold... 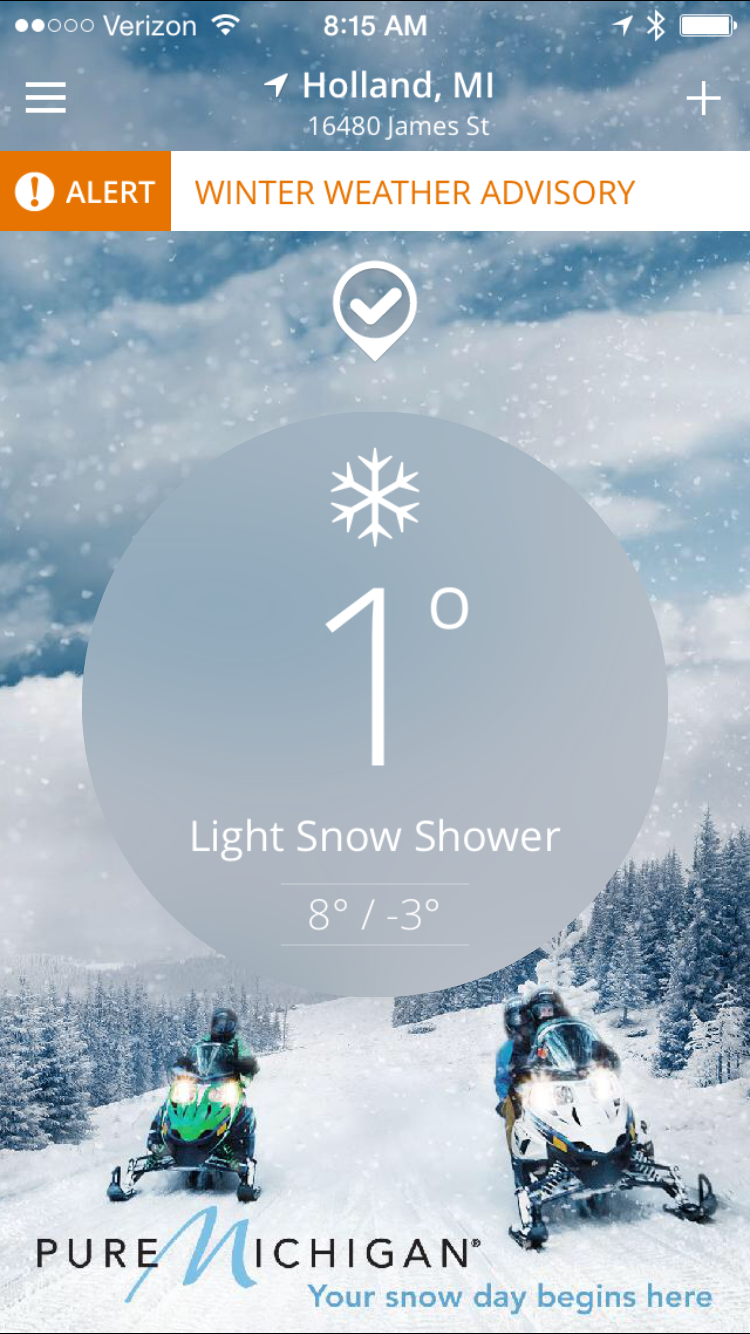 Was she serious a photo walk...how was I going to do that? It was frigid outside and there is two plus feet of snow in my backyard. But...if you know me at all by now, you know that I refuse to be beaten. So I put on my big girl snow pants and went outside. 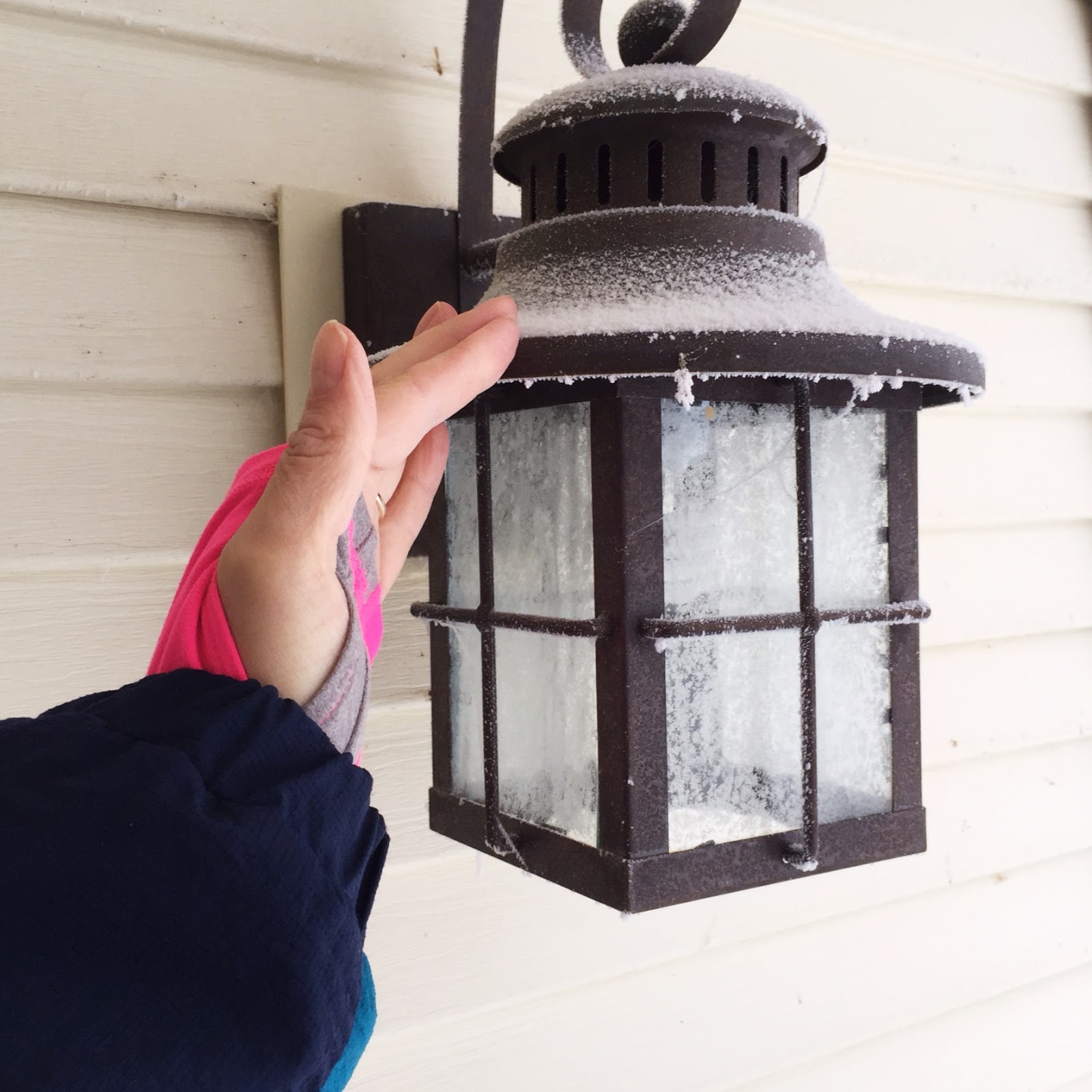 The first thing I found was the light right outside my side garage door covered with a dusting of snow and some lovely frost on the panes of glass. 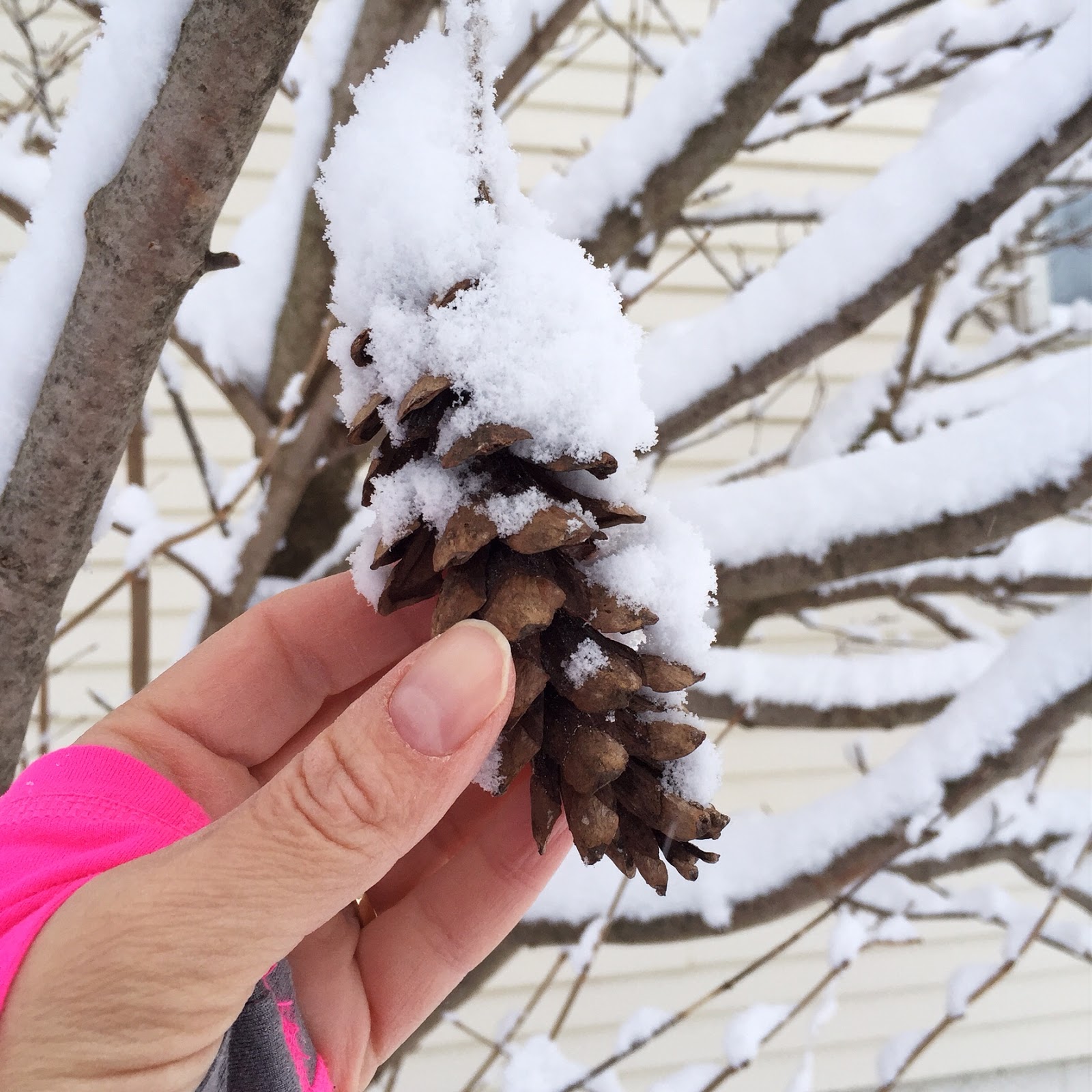 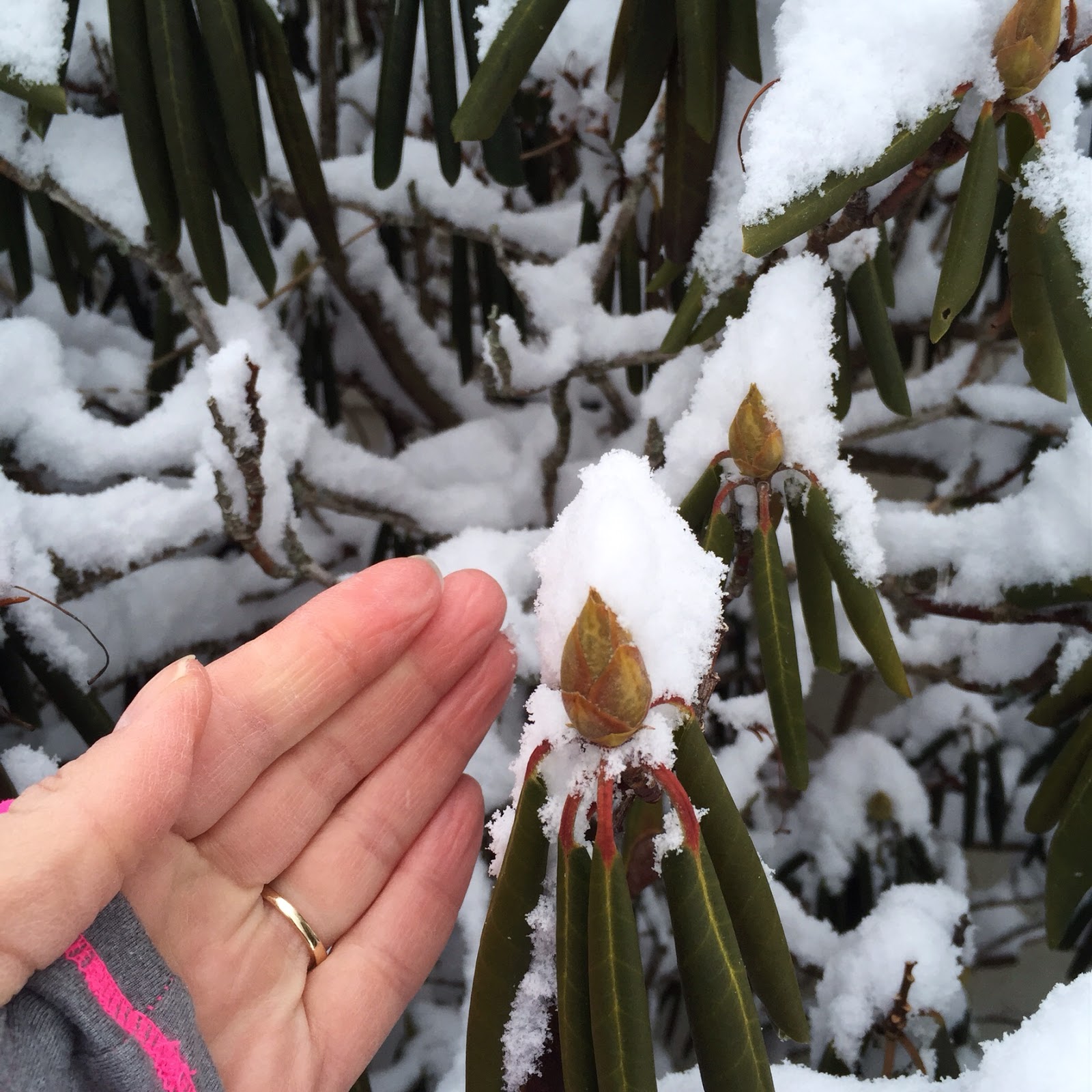 I found rhododendron buds on my bush waiting for spring. 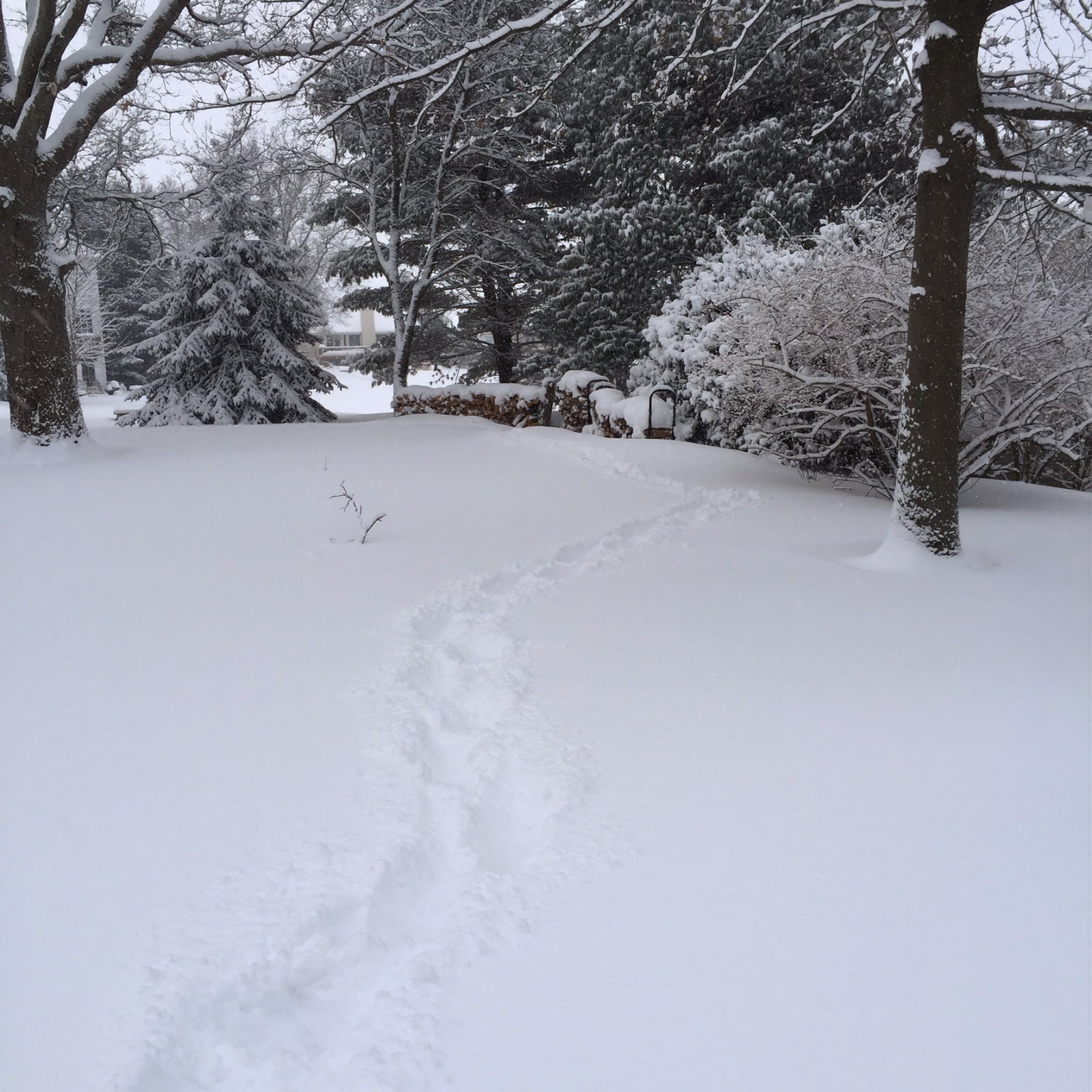 I made a path to the wood pile. 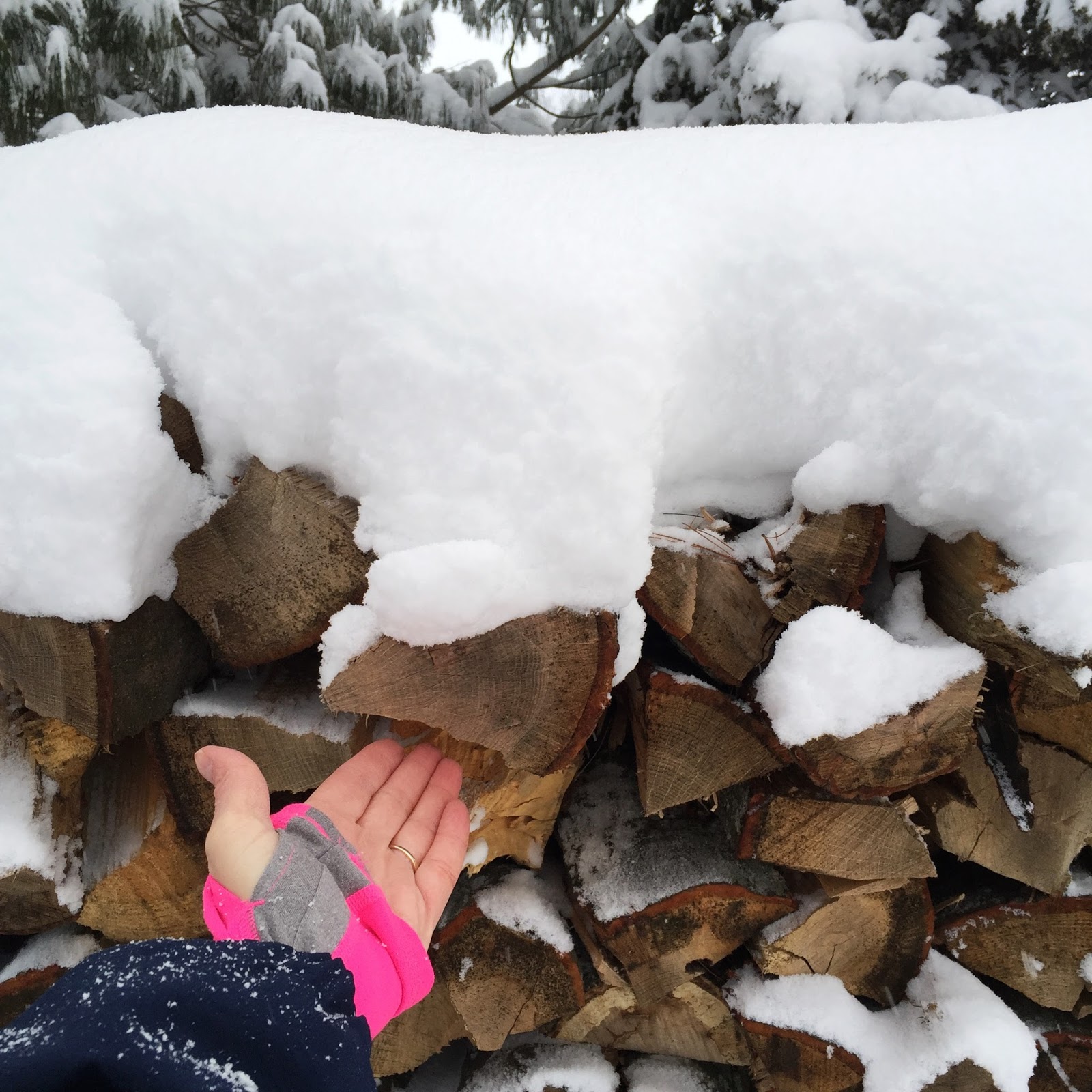 The wood pile made me happy and so worth wading through the snow. 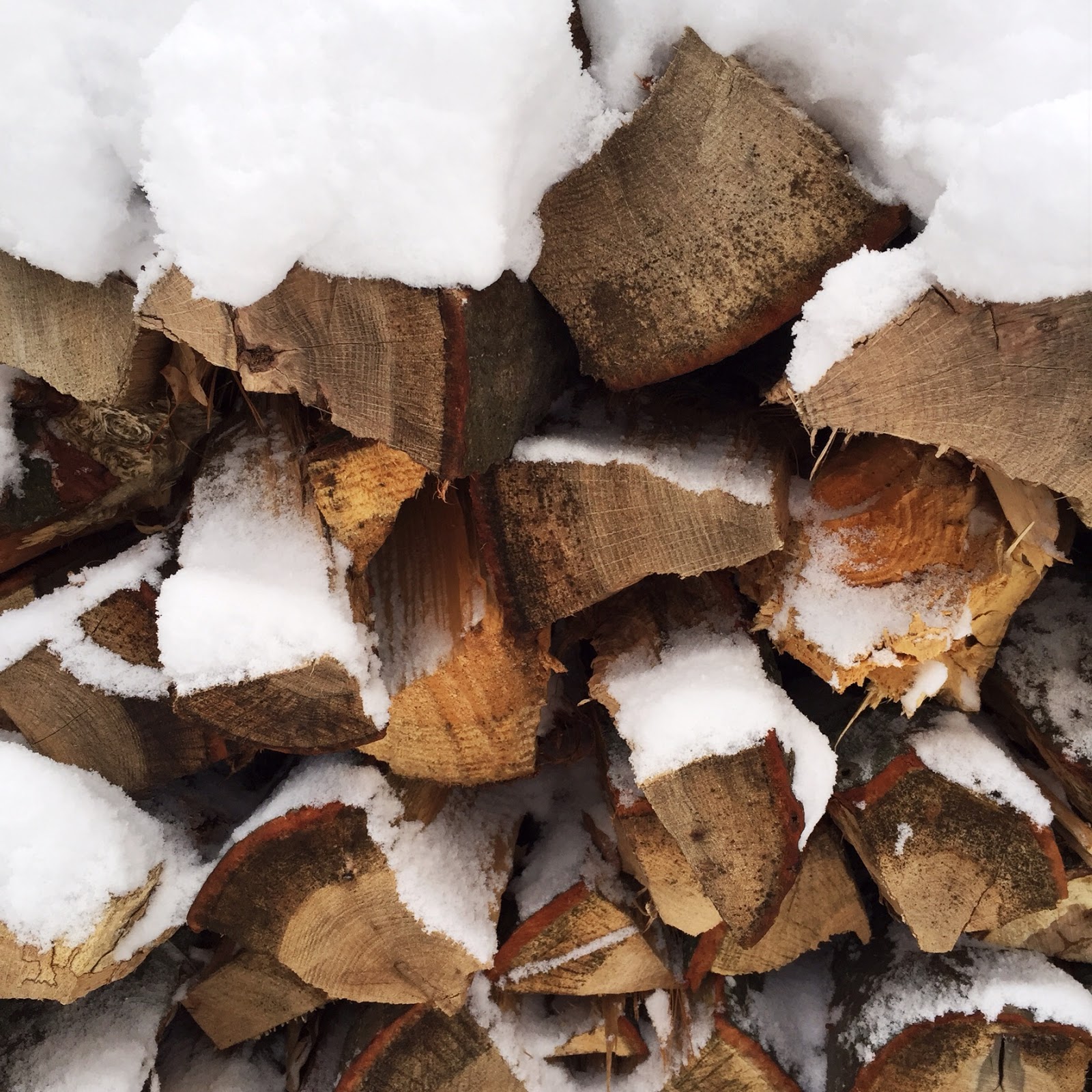 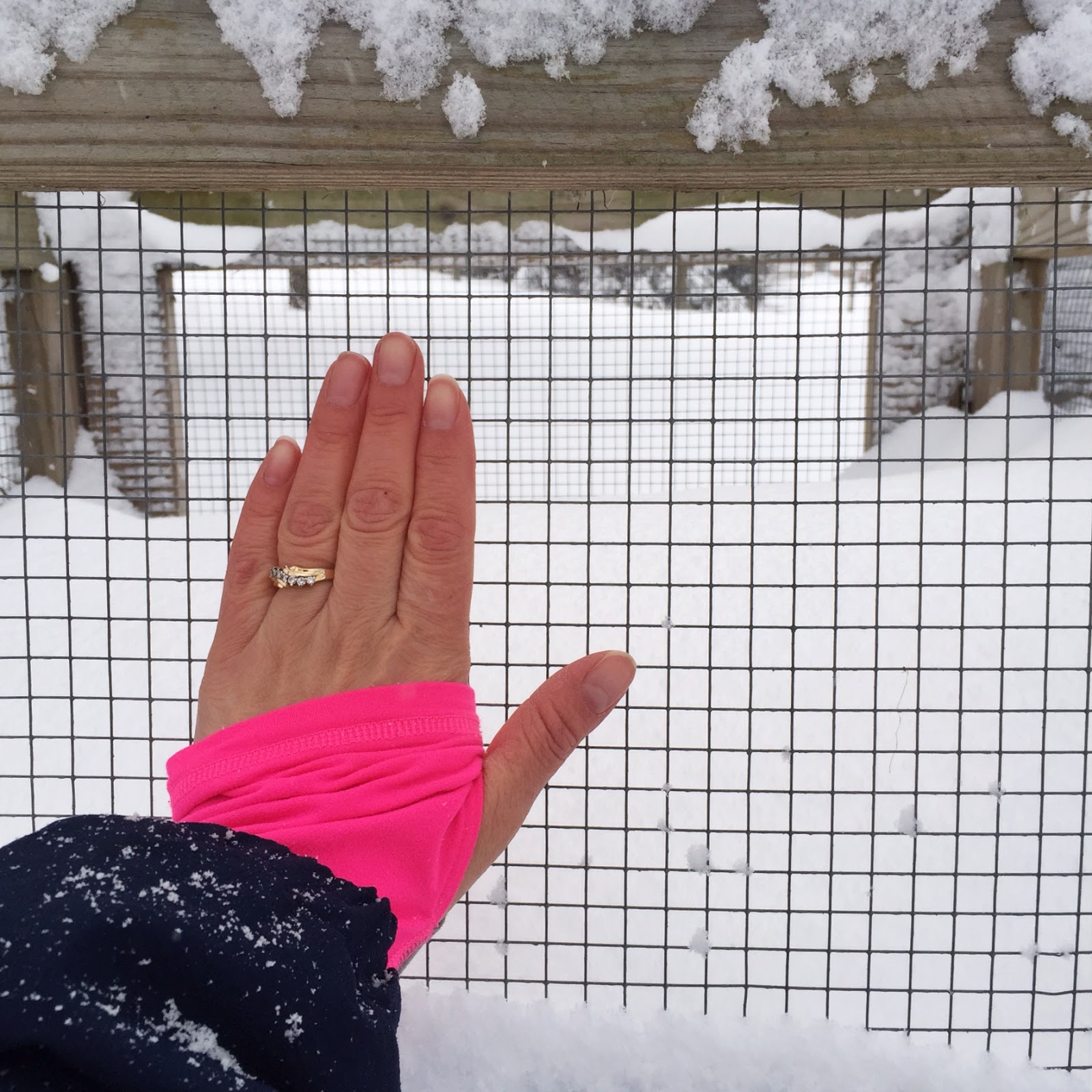 Then I waded across the backyard to the compost bins. 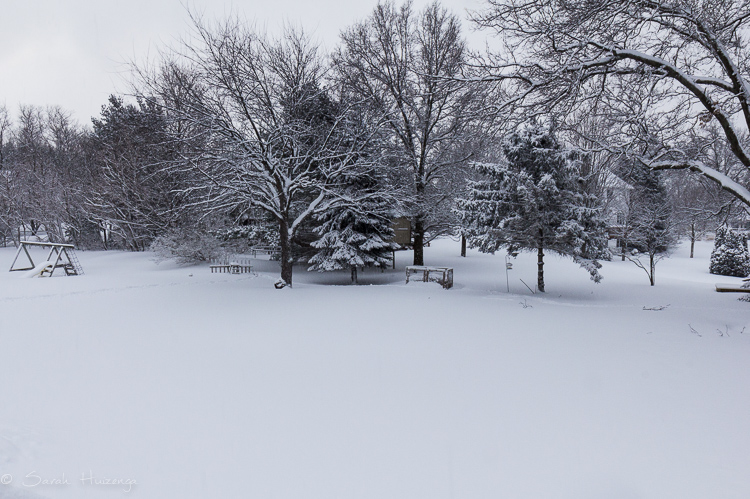 It was cold and it was snowy, but you know what it was also a lot of fun, and I proved to myself that I don't have to let the weather stop me.

My reward for completing my photo walk... 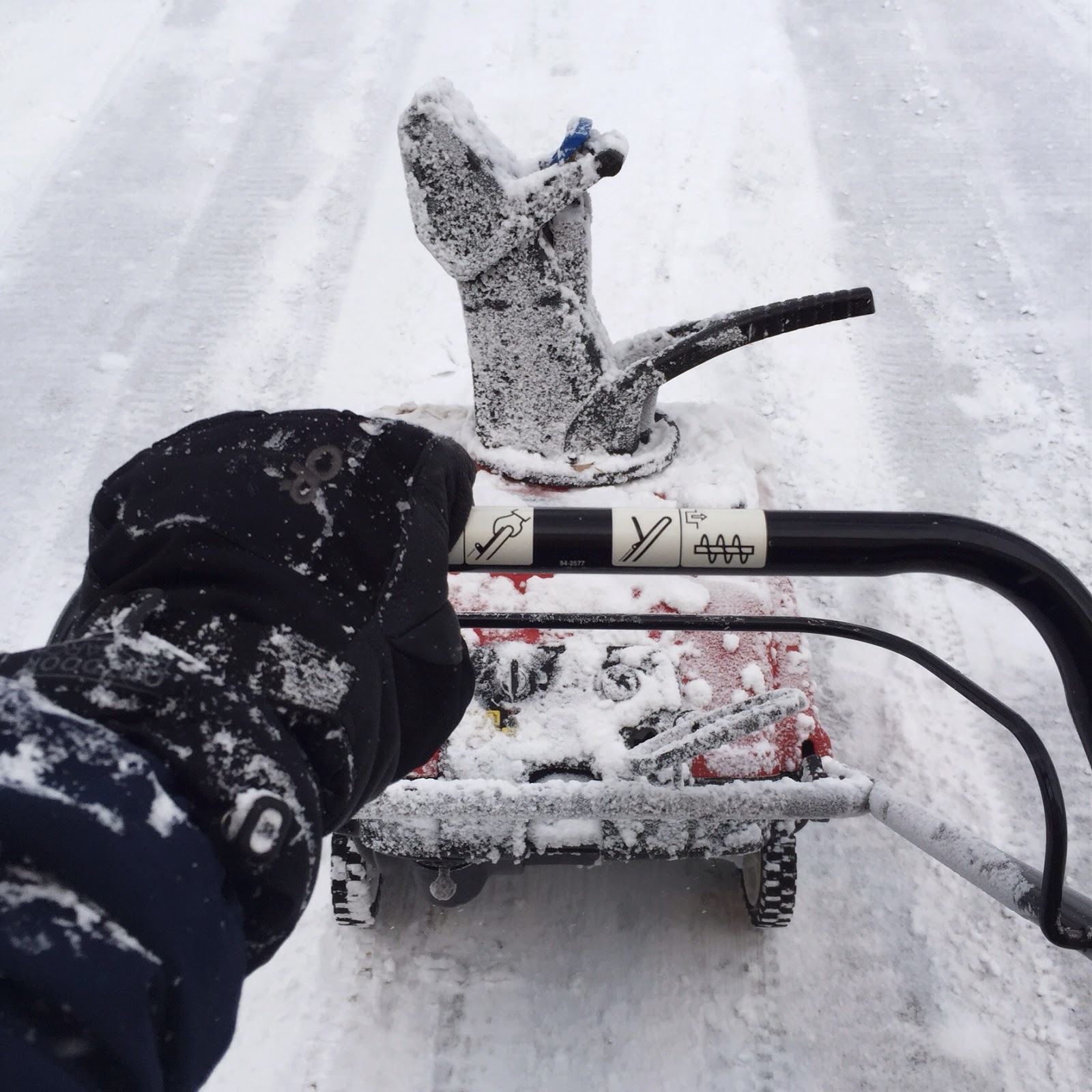 I got to snow blow the driveway. 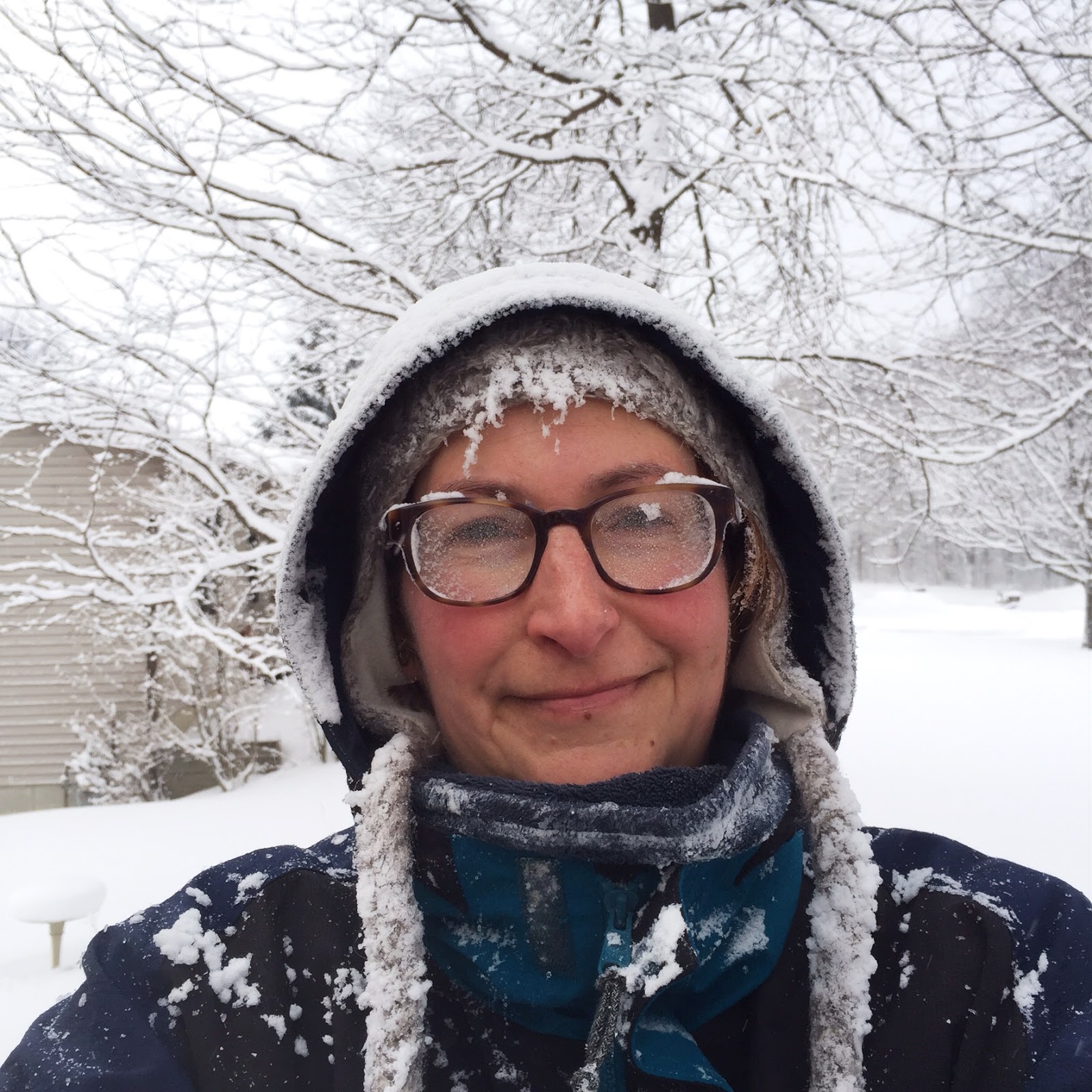 The downfall of glasses. After this I claimed my reward of a nice chai latte. 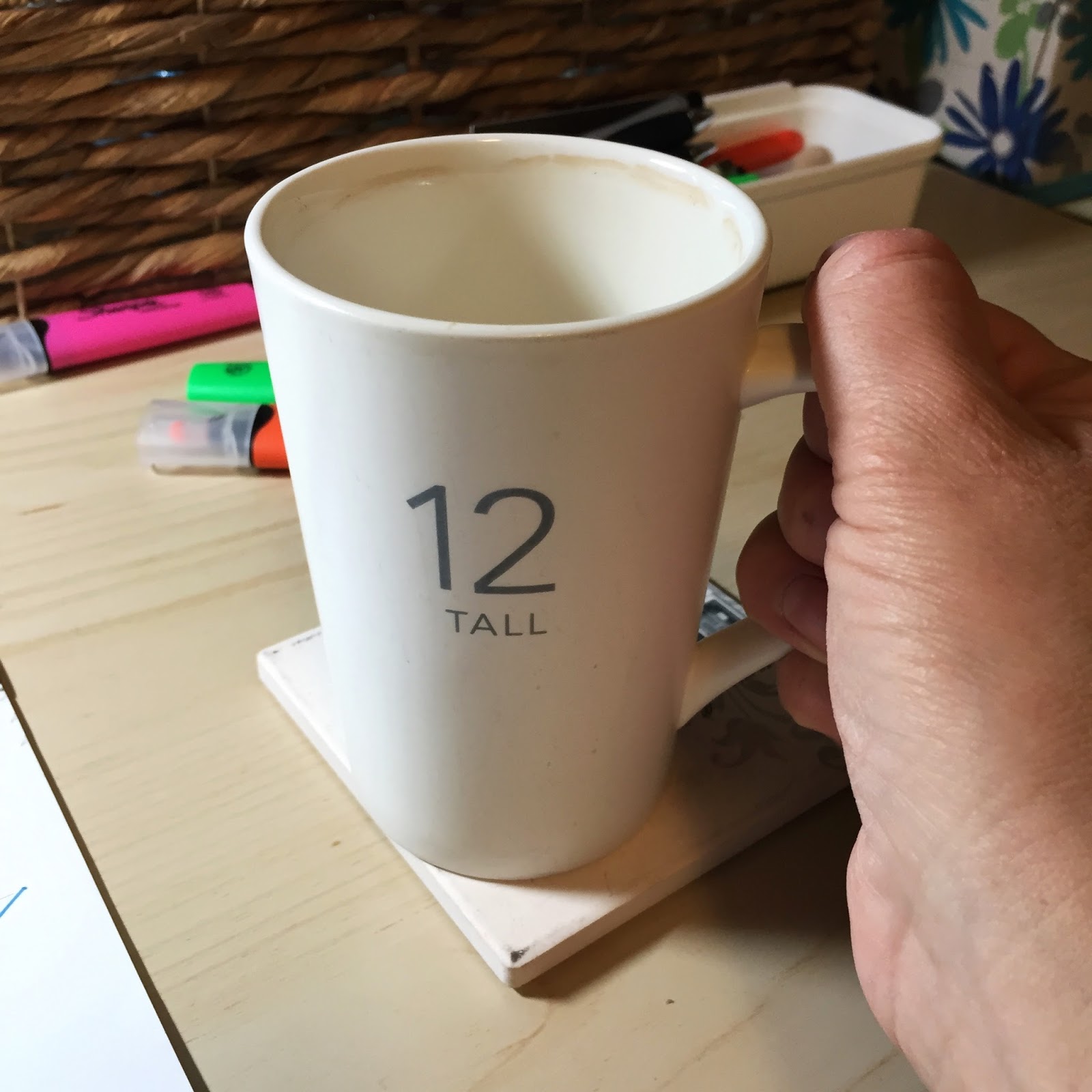 I hope everybody is staying warm out there.

The Coffee Shop Chronicles - No. 27

There is joy in learning new things on a subject you are passionate about, for me that subject is writing. I am on a quest to close the gap between the writer I am and the writer I want to be. Part of that quest involves taking writing classes. I was fortunate enough to have taken two classes last year with Amanda Mays of ALM Writes that helped me finally establish a daily writing routine. A routine I had been wandering around avoiding for the past two years. My daily routine has brought such joy to my writing life. 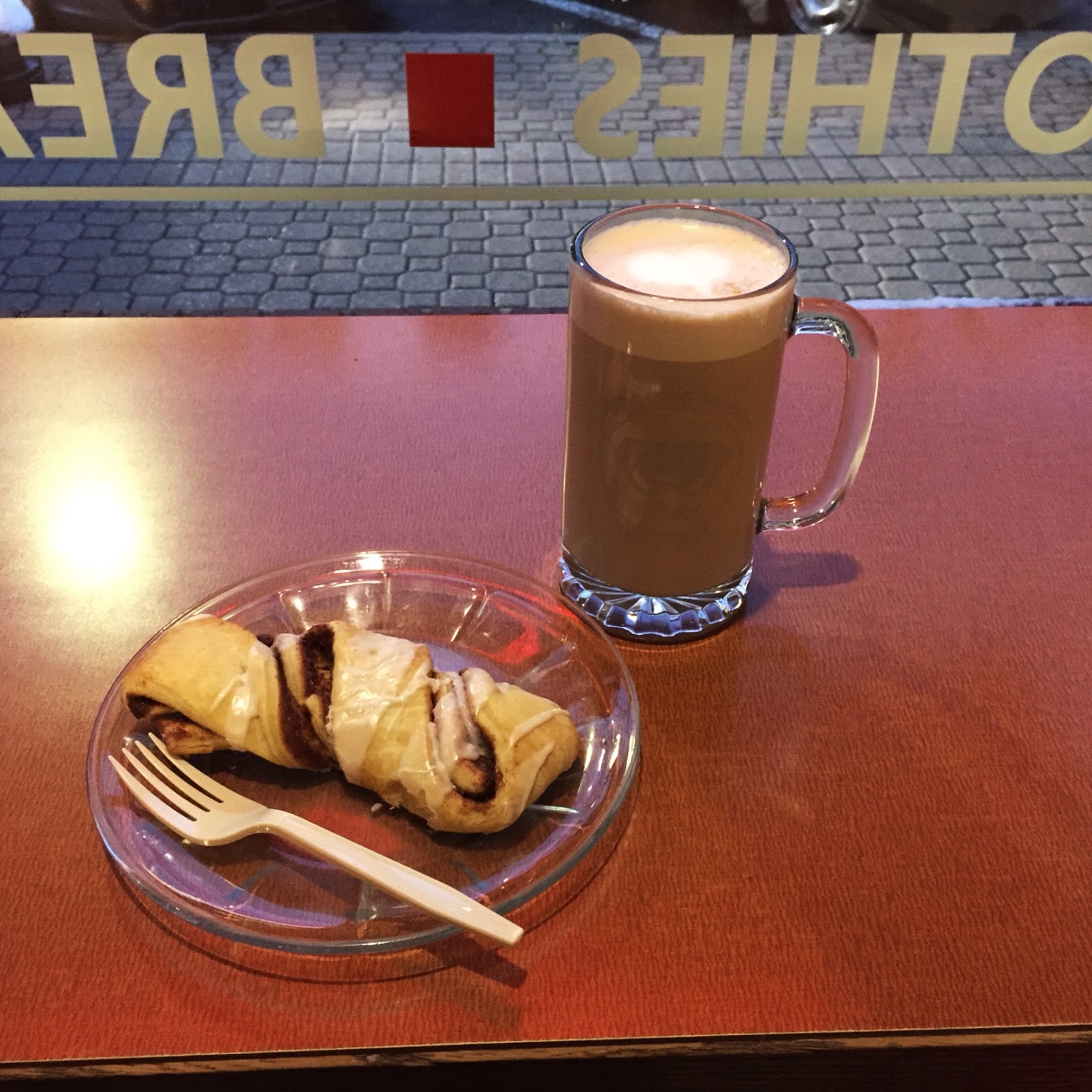 But even with a daily writing practice the gap remains between the writer I am and the writer I want to be. In the on-going quest to become a better writer I started a new writing e-course this week taught by the very talented Jenna McGuggian. We are learning about writing with our heads, our hearts and all of our senses. Which are all great things until I tried to put all of these components into this week's coffee shop chronicle. Let me tell you, things quickly became a muddled mess. I was trying to find the most exquisite, mouth-watering description for my cinnamon twist. When I really wanted to say "it was a less-than warm, slightly misshapen cinnamon twist that had been delivered to the coffee shop in a  white cardboard pastry box sometime in the early morning hours. It was sitting on a small glass plate with a plastic, fast food style fork as its only companion." Maybe next week I will try to savor the flavor a little more. Or, maybe I should go back to that first coffee shop, the coffee shop where the chronicles began and get a freshly, in-house made, double chocolate muffin with little surprises of mini chocolate chips inside. The chocolate chips having been made all soft and melty by the fact that the muffin has been warmed and slathered with fresh butter.

After endless pages of sensory overload and mindless dribble I decided to rip all the pages that I had written out of my notebook and throw them on the cutting room floor. What you are getting now is written directly from my heart, the place I have always written from best. I will slowly continue to add in the other components we are learning. I will continue to enrich the story without overloading it with detail. The gap can't be closed in one day, one story, or even in one writing course. It is a process, and I know in my heart that the joy is in the process.

I arrived at the coffee shop at eight o'clock on the dot.

This seems to be the perfect time to arrive. I have missed the coffee to-go, before work people and it is a little early for the morning coffee date people. 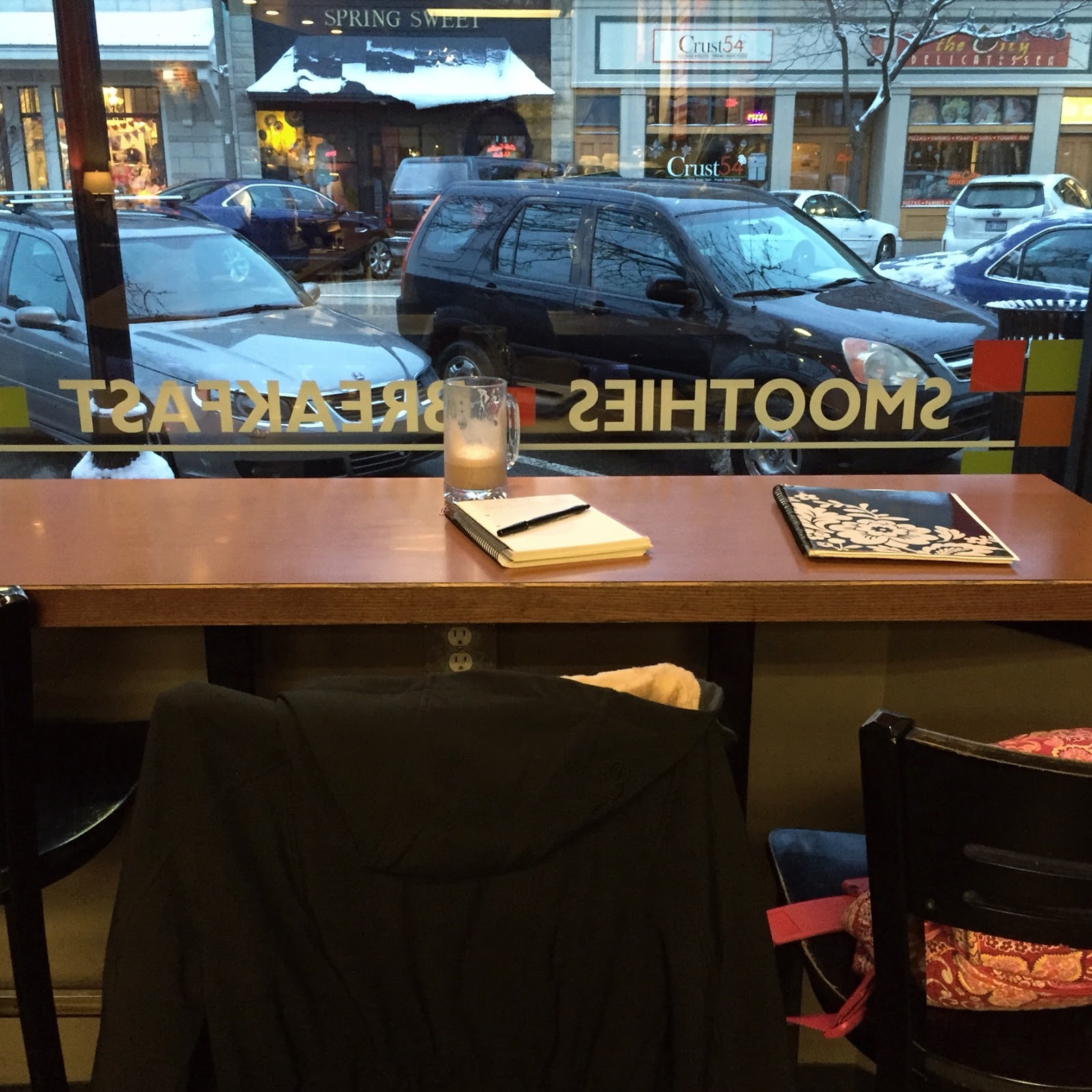 I had been coveting this perfect writing spot all week as Scout and I walked past the coffee shop windows on our morning walk. It is the perfect little window nook with three sturdy, wooden bar stools. One bar stool for my writing bag, one in the middle for me, and one empty one for space. You know that no one, unless desperate, would sit that close to a complete stranger. I was counting on that fact and I didn't feel the least bit bad about it. I like to spread out when I do anything creative and this was the perfect amount of counter space.

The big window makes me happy. I love looking out at life going on downtown. Being a photographer, I liken the window to my camera view finder. I can frame the picture, or the story anyway I want to, choosing what I want to focus on.

As I settled with my cinnamon twist and my chai latte, notebook and my pen, I began the process of framing the individual stories.

First, my favorite story, the continuing story of the little china doll grandmother from last week. This little lady is a relentless walker. I don't walk downtown on the weekends, but last weekend my husband and I happened to come downtown to his favorite breakfast place. They serve the best restaurant version of a home-cooked breakfast, and cinnamon rolls the size of dinner plates oozing with frosting. As my husband and I were turning the corner onto the main street, there she was crossing at the intersection ahead of us. I pointed her out to my husband, thankfully he had already read the chronicle that week so he knew who I was talking about. Earlier this week I gave her a big hearty Good Morning at our first crossing of paths for the day. I think I scared the crap out of her, because since then she won't even make eye contact with me. But on a positive note, she doesn't move over as far on the sidewalk when she sees Scout and I coming towards her. I continue to make it my goal to have a conversion with her someday. 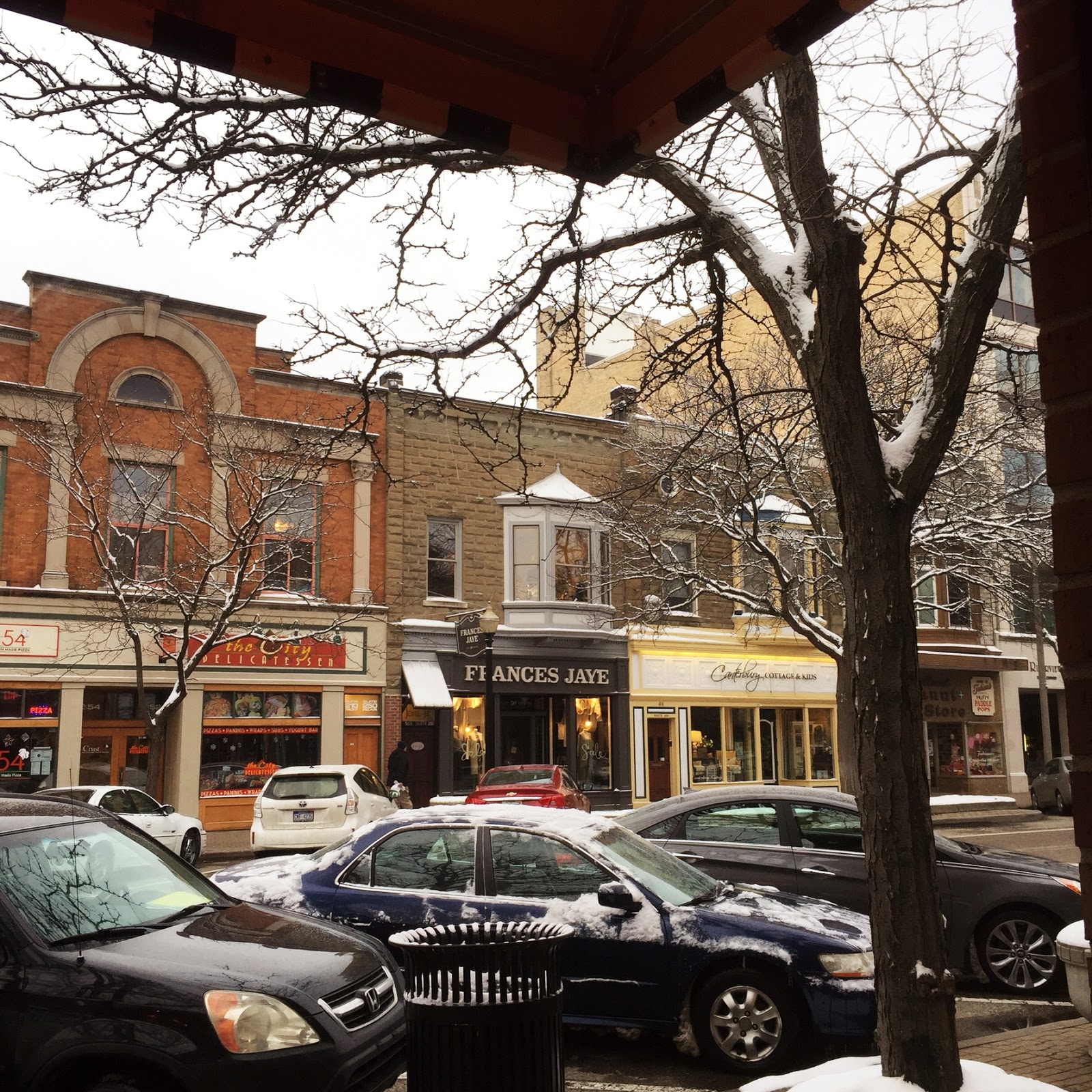 My next story involves a man and his dog. I have never seen them downtown before. They paused outside my window so that the man's medium-sized Chewbacca looking dog could lift his leg to pee on a tree. Now I am not a fan of this type of behavior. I have a male dog but I take him discreetly behind the buildings to a little square of grass (currently a patch of snow) to pee. Thankfully Scout also squats like a girl, due I think to his less than stellar hips. Anyway while Chewbacca was leaving a trail of yellow on the tree and at the base of the tree, I turned my focus to Chewbacca's owner. This man could have been a tree himself, he was dressed in a big, puffy brown winter jacket and atop his head sat a forest green, knit stocking cap. He stood just as still as a tree too, waiting while his dog relieved himself. Maybe he was embarrassed by Chewbacca's behavior? Well you know what then? You can change that behavior. You are the owner, you have control.

After the man and his dog moved on, a movement in the tree caught my eye. A long, shiny white ribbon wrapped around a tree branch. A string belonging to some child's lost ballon, the ballon now long deflated. I sat mesmerized by the swaying of that shiny white ribbon in the gentle breeze. I wondered about the child who lost that ballon. Was it their prized possession from a long, tiring day spent downtown with mom and dad? I am certain there were tears involved, there always are in these situations. Did Dad save the day by going to get another ballon for the young one? Or were they just as crabby as the child by this point in time and told the child that they should have held on tighter? Unfairly placing blame on that young child for something that was an accident. We will never know, but I am hoping there was the appearance of another ballon before the day was over.

My last story framed through the window was of a man in a bright red snowmobile suit digging through the trash cans. In his hand was a plastic bag, he was collecting remnants of uneaten food. Did you ever think that your half eaten hot dog would be another man's meal? Every town, every city has their underbelly, the thing they don't want exposed. The man in the red snowmobile suit is ours.
Posted by Sarah Huizenga at 1:00 AM 18 comments: 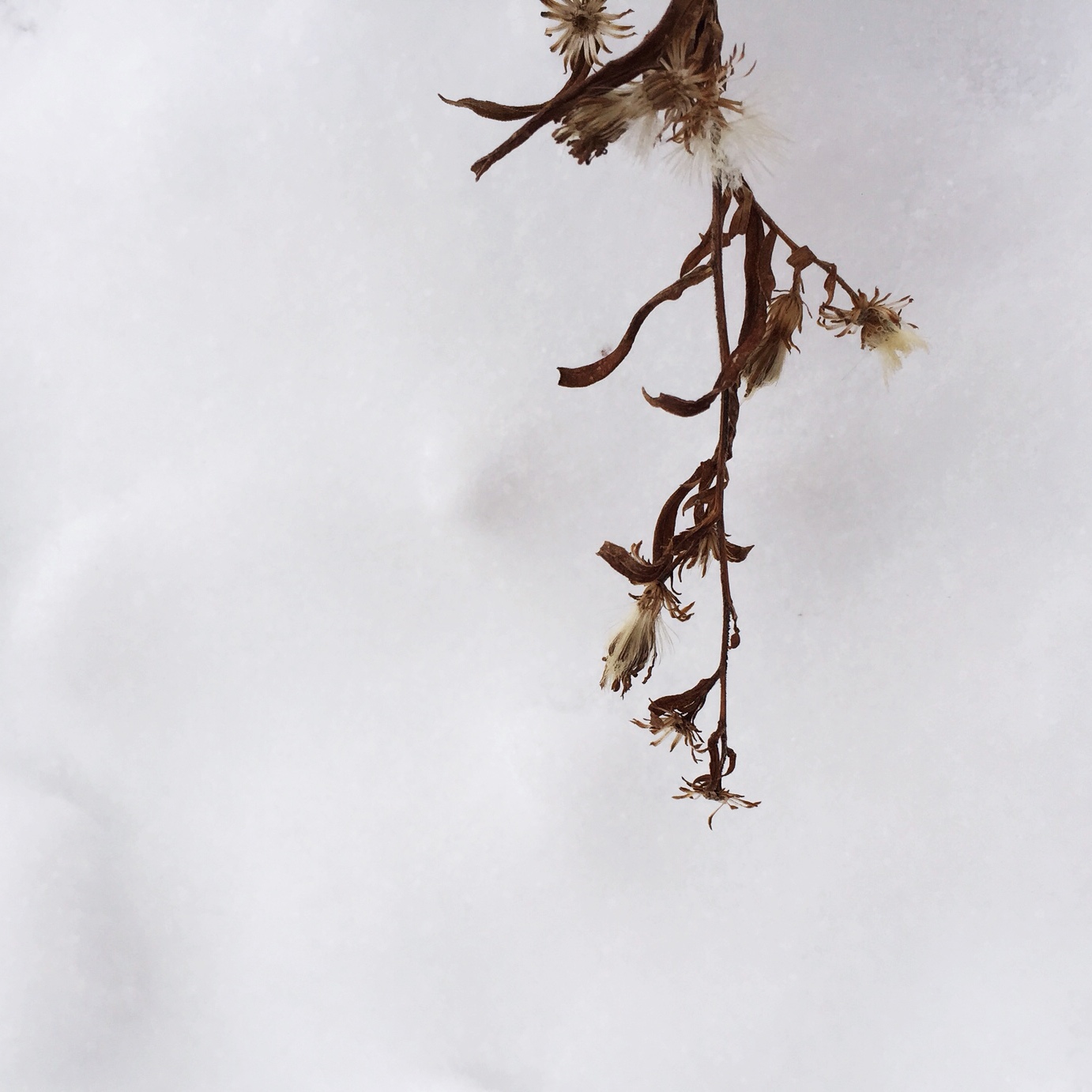 I love how finding a simple weed stuck in the snow can turn into a piece of art. 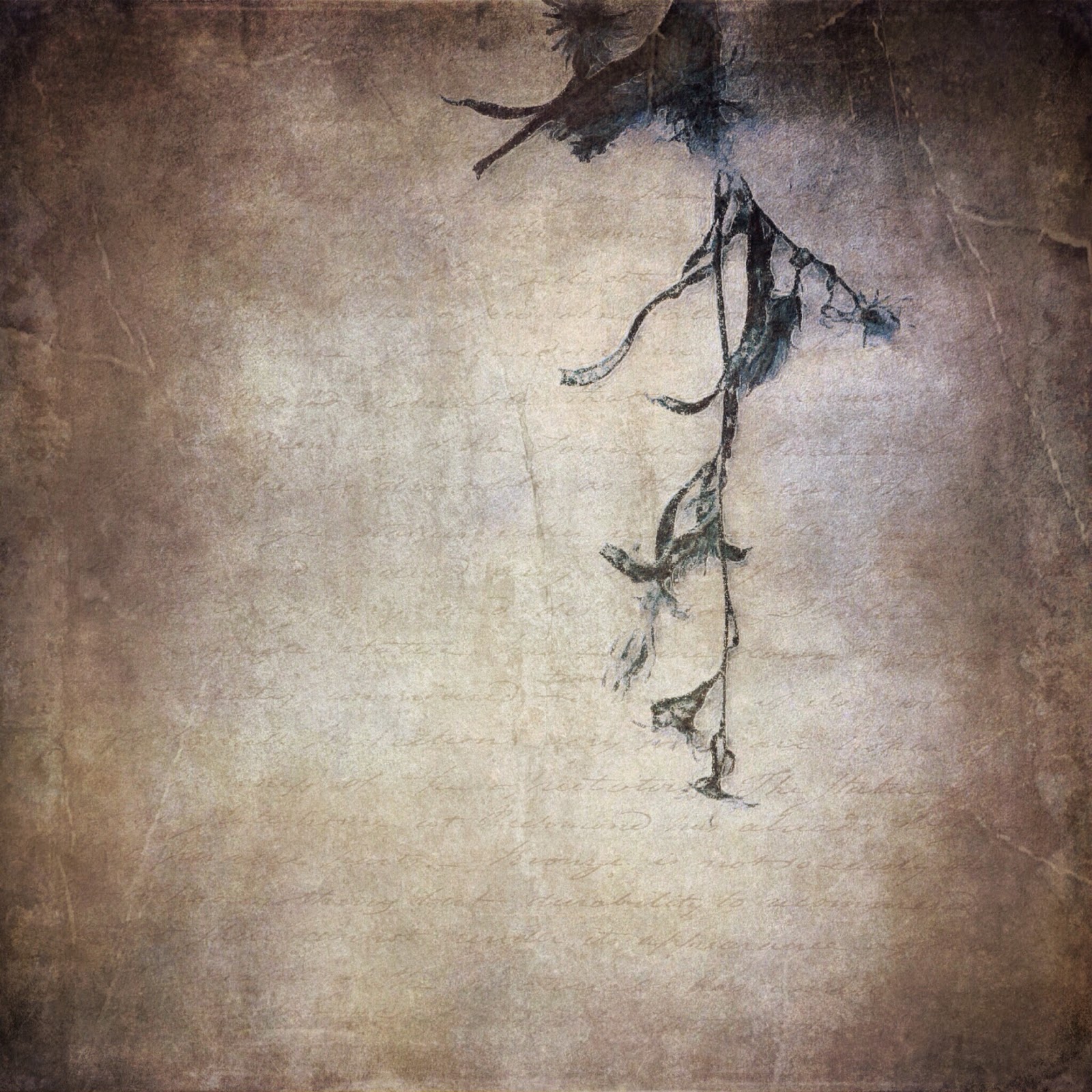 I could have played with this image for hours, but eventually you have to put down the iPad and walk away. 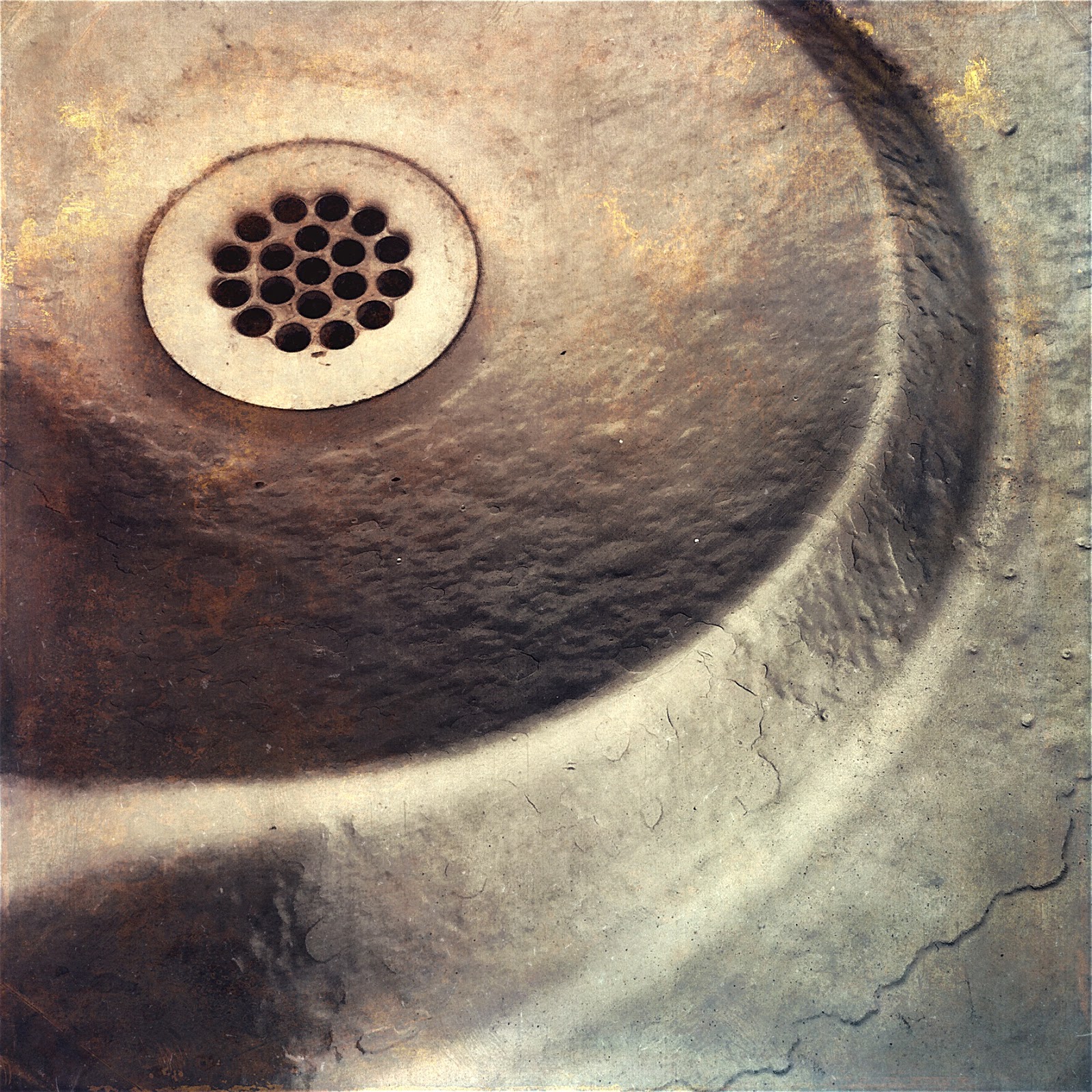 I found some ice encrusted on the bowl of a metal drinking fountain. 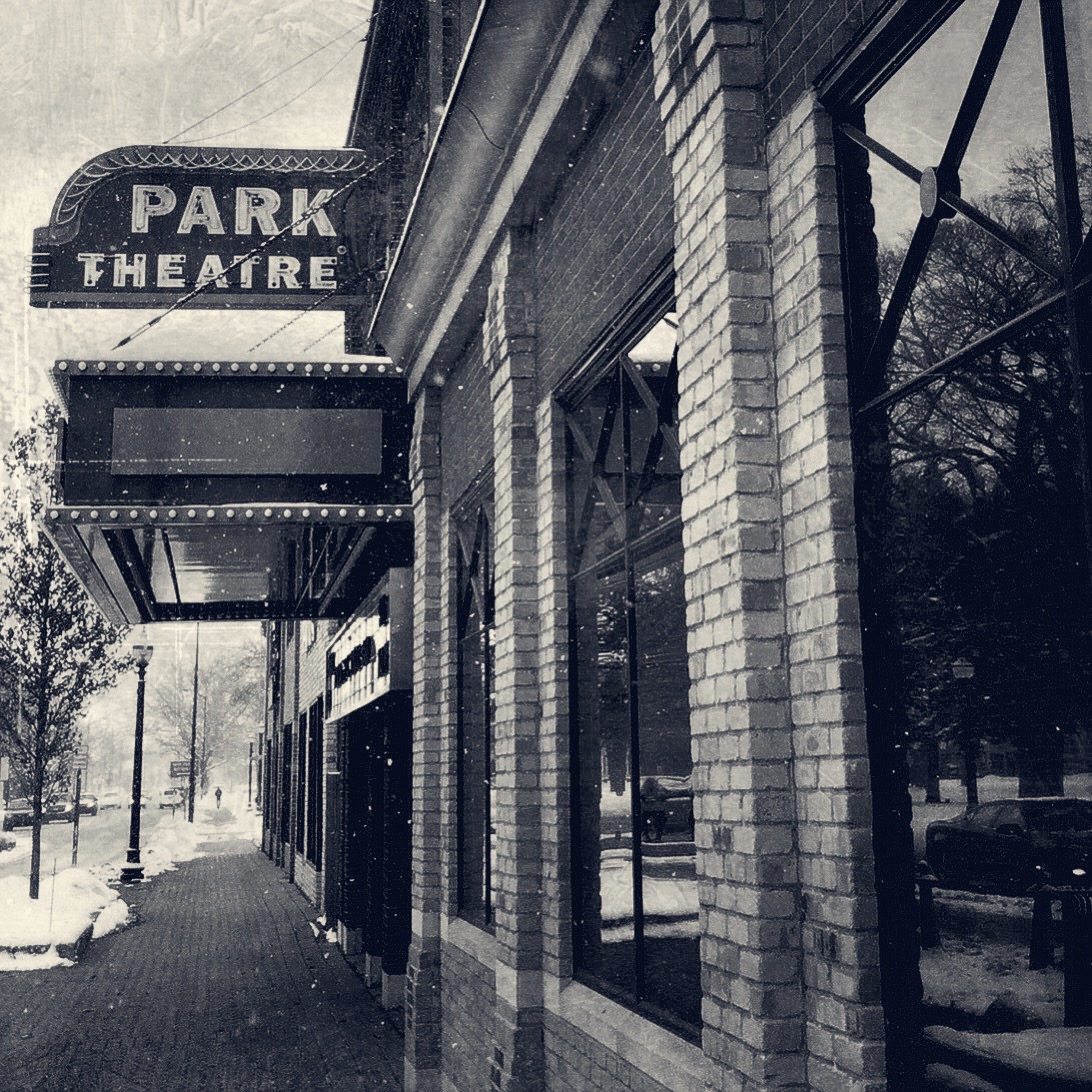 After an appointment downtown this week, I had to wander farther down the street to capture this vintage theatre marquee. 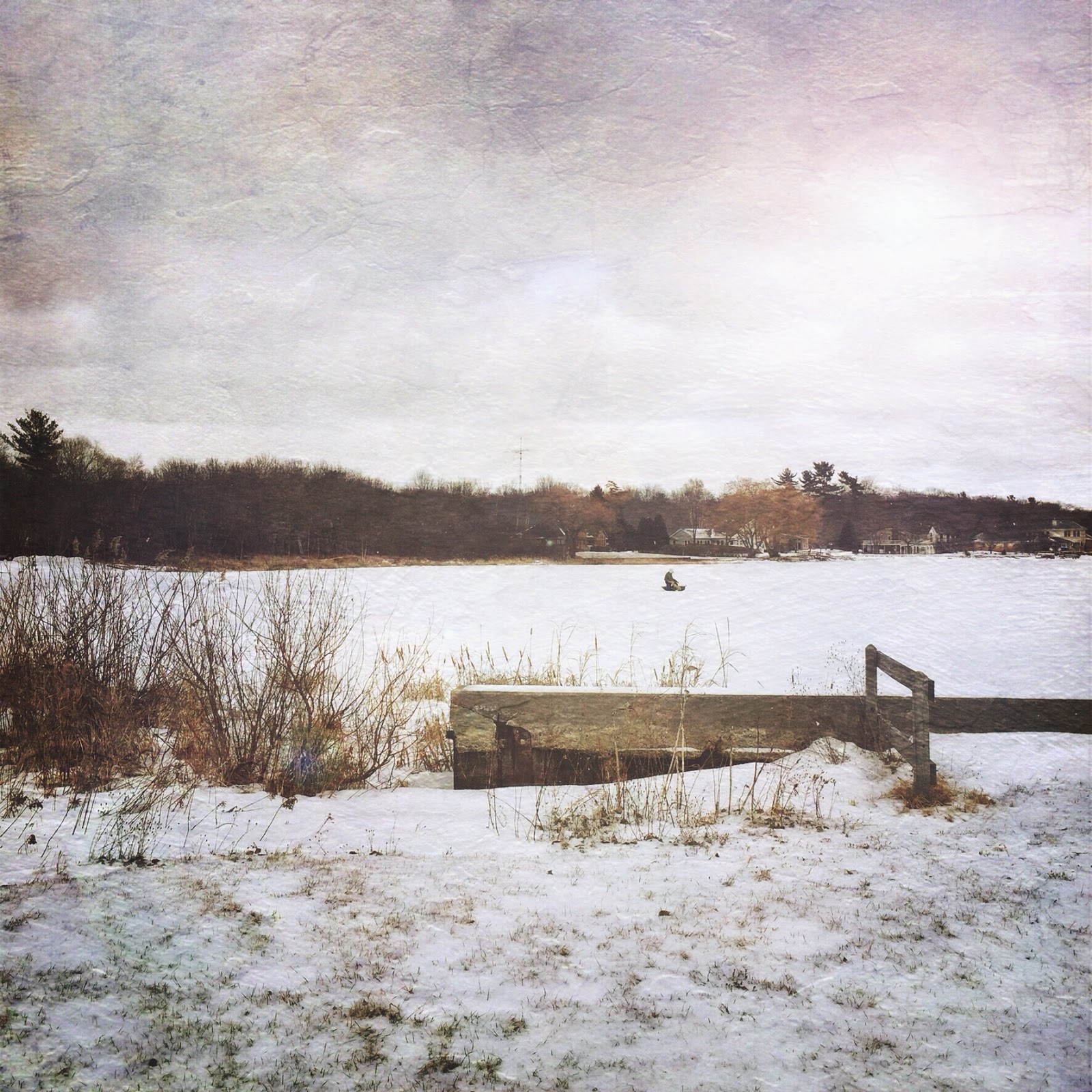 I found a lone ice fisherman. 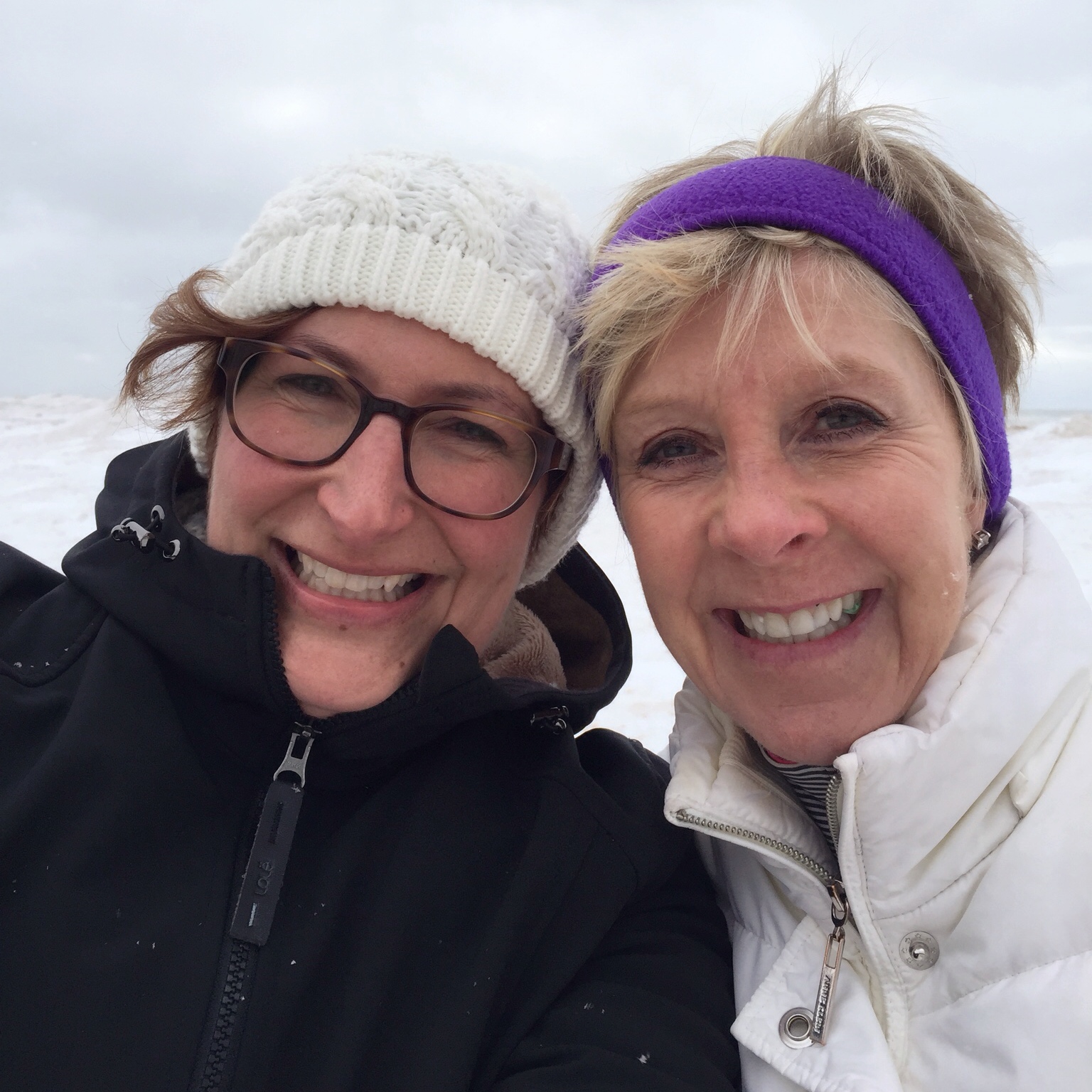 My friend Jill and I had one of our adventure days last week Friday. We were also celebrating Jill's birthday. She should probably be scared when I text her and tell her to pack warm mittens, something to keep her head warm and boots. But being the true friend that she is, she just does it and doesn't ask questions. I love this picture of us because we are totally in the moment and enjoying a cold, snowy winter day at the beach. 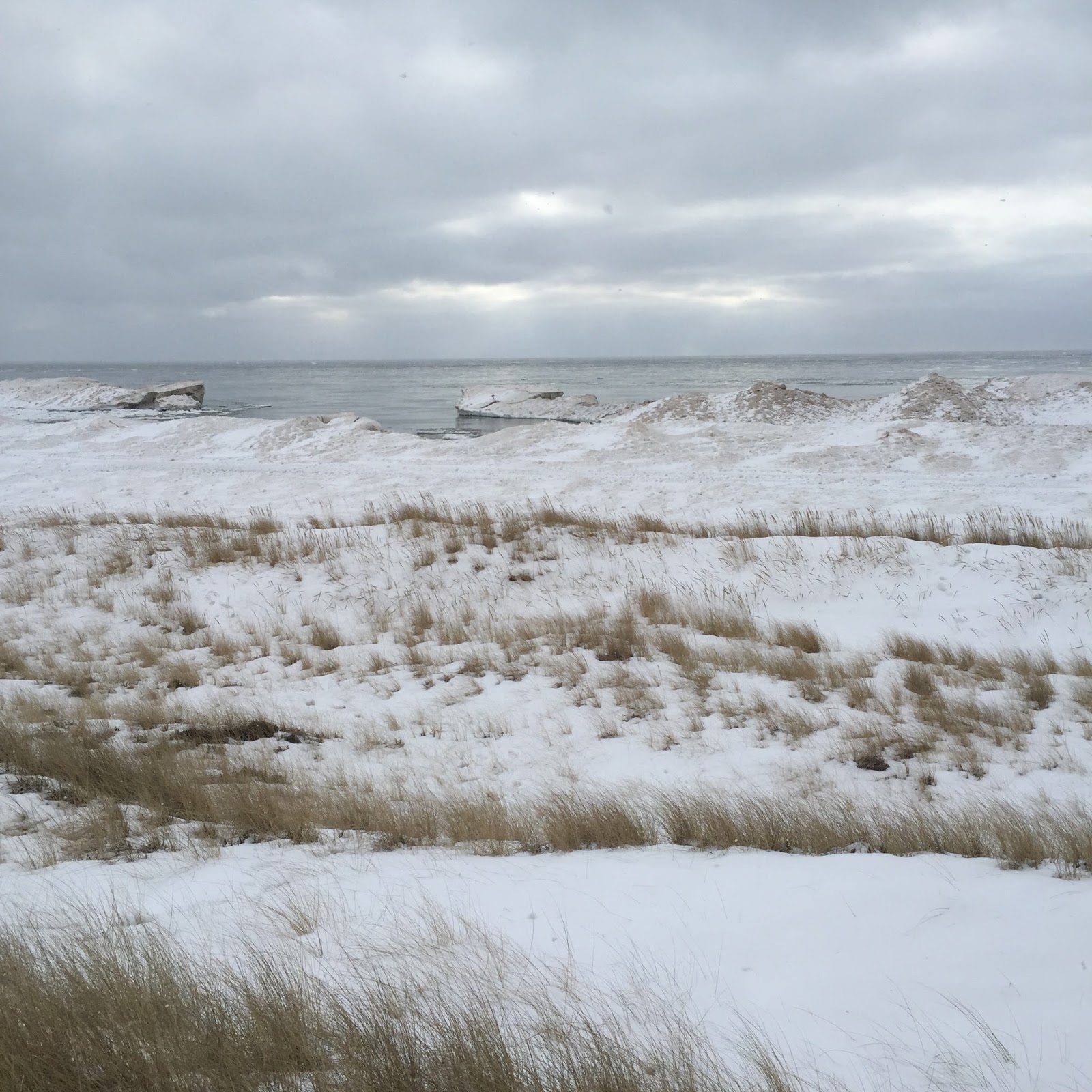 This is what I made us do. We parked on the closed to traffic beach road, climbed over the guard rail, waded through the snow and beach grass, so I could get some photos of these ice bergs. Never a dull moment on our adventure days!

Hope you are having a great week!

Joining Kim for Friday Finds
Posted by Sarah Huizenga at 1:00 AM 28 comments: