Hitching Up The Sidecar 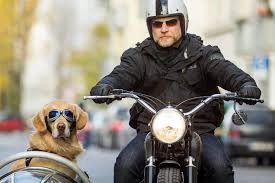 The time has come to pick that one little word that I will attach to the year ahead just like I would attach a sidecar to a vintage BMW motorcycle. The year ahead will take off traveling at a high rate of speed just like that motorcycle, and then hopefully it will slow down to a reasonable cruising speed. All the while that sidecar is right there attached to the BMW keeping the exact same pace.

You may be curious what my one little word for 2015 is going to be. Hint - it isn't motorcycle or sidecar. I thought I had the perfect word all figured out at the beginning of November. It fit me to a tee or so I thought. It was going to be curious. But one day of writing at a local coffee shop completely changed the course for the entire year ahead. I eluded to this change in direction in the post The Wider View. I will be doing a year long photographic and writing study of nature's beautiful bodies of water. When I wrote that post the idea was still a little seed that had just been planted. Since that time the idea has rooted itself firmly in my head, my heart and my soul.

I have a notebook full of ideas for this project. I know in my heart it is the right time for this kind of work. Let me also state that I am horrible at sticking with year long projects. Not to be deterred by past failures, I have not only decided to take on this year long endeavor. I have also signed up for a year long class on making movies with Xanthe Berkeley called A Year of Creating Time Capsules. I have always wanted to take one of Xanthe's classes to learn how to make movies but the timing was never quite right before, now it is perfect. I want to incorporate short movies into my new project. 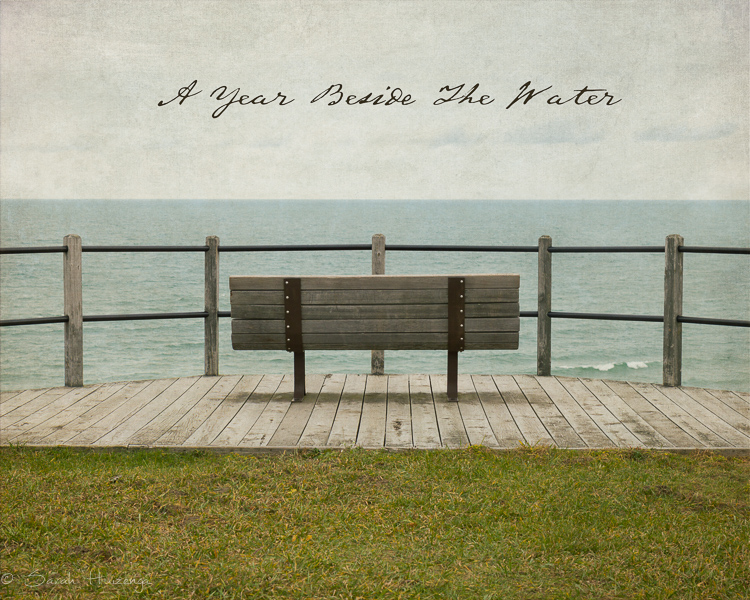 The best part is that this whole project will be housed in one place completely devoted to it. I am putting the finishing touches on a new Squarespace blog that will go live very soon - A Year Beside The Water.

For those of you who love the Coffee Shop Chronicles you needn't worry, those will continue here just as they have in the past. I hope to post two Chronicles a month. Other than that though most of my time will be spent on the new blog.

I see 2015 as a year of tremendous artistic growth for me. I am committed to this project and I am committed to investing in my future. So I am strapping on my leather motorcycle helmet, pulling on my vision correcting googles and revving up the engine, loading "committed" into the sidecar, and getting ready for the ride of my life.

The Coffee Shop Chronicles No. 25 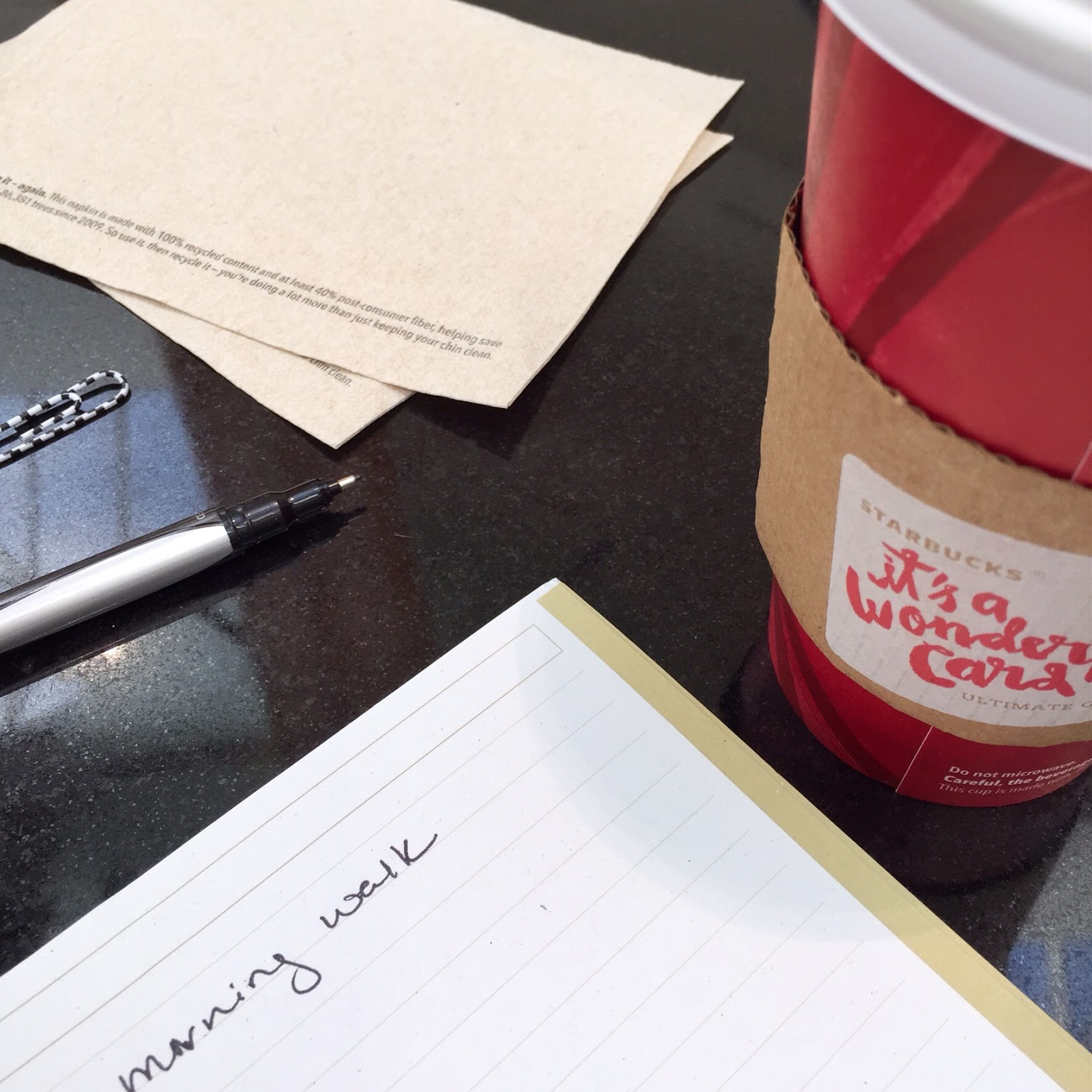 I was hoping for a day of clear roads and no precipitation in the air so I could make a trip into the city. So far December is being much kinder than November was in the weather category, so I was able to make the trip. My destination was the big shopping mall that has a Starbucks located in the very center of the mall. It has good viewing vistas in every direction making it perfect for writing and people watching. 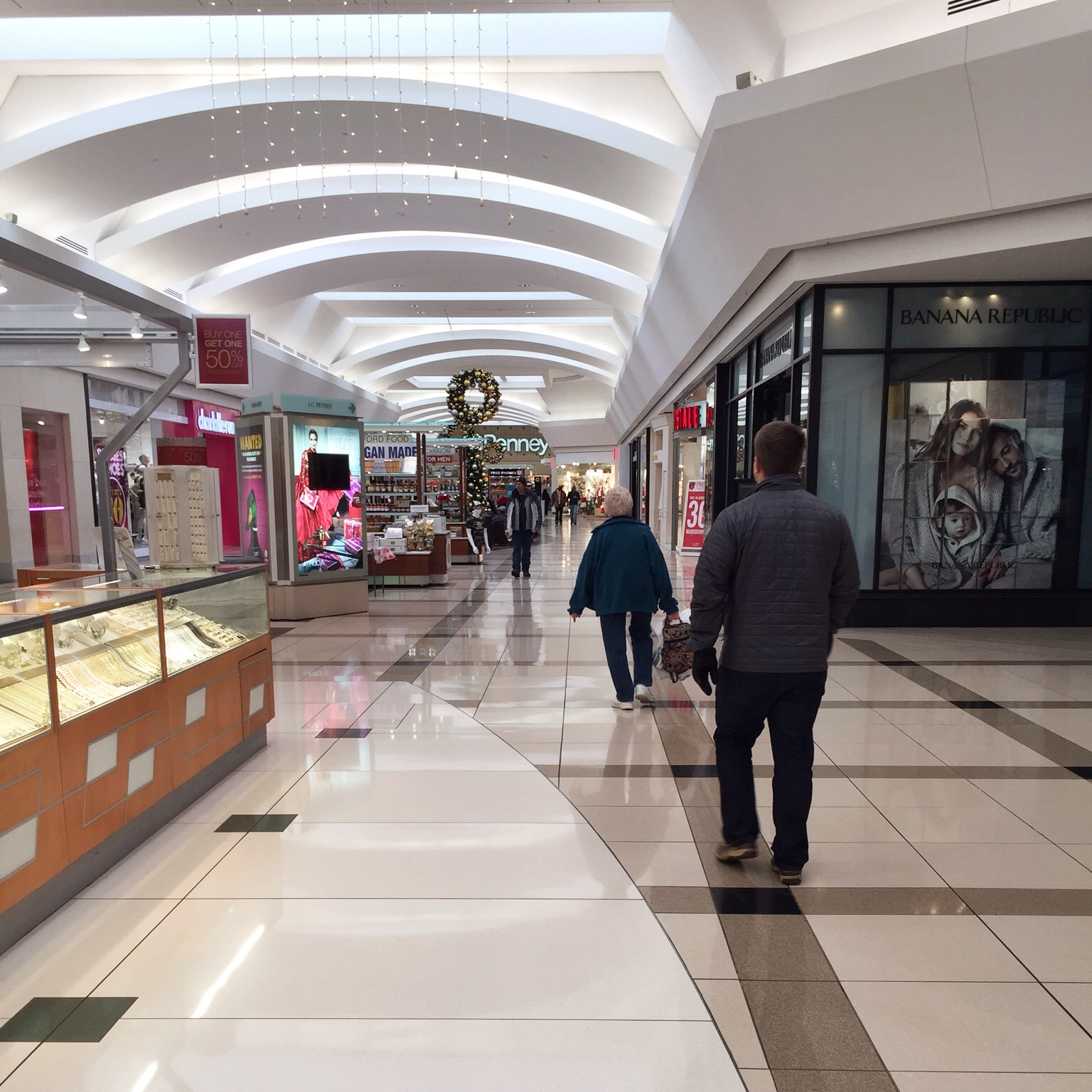 On my way into the mall I ran into a friend of mine from book club who had just finished her morning walk around the inside perimeter of the mall. It was lovely to see her and chat for a few moments. Although if she knew that I was going to write about the people at the mall she would probably be very happy that she was finished with her morning walk. 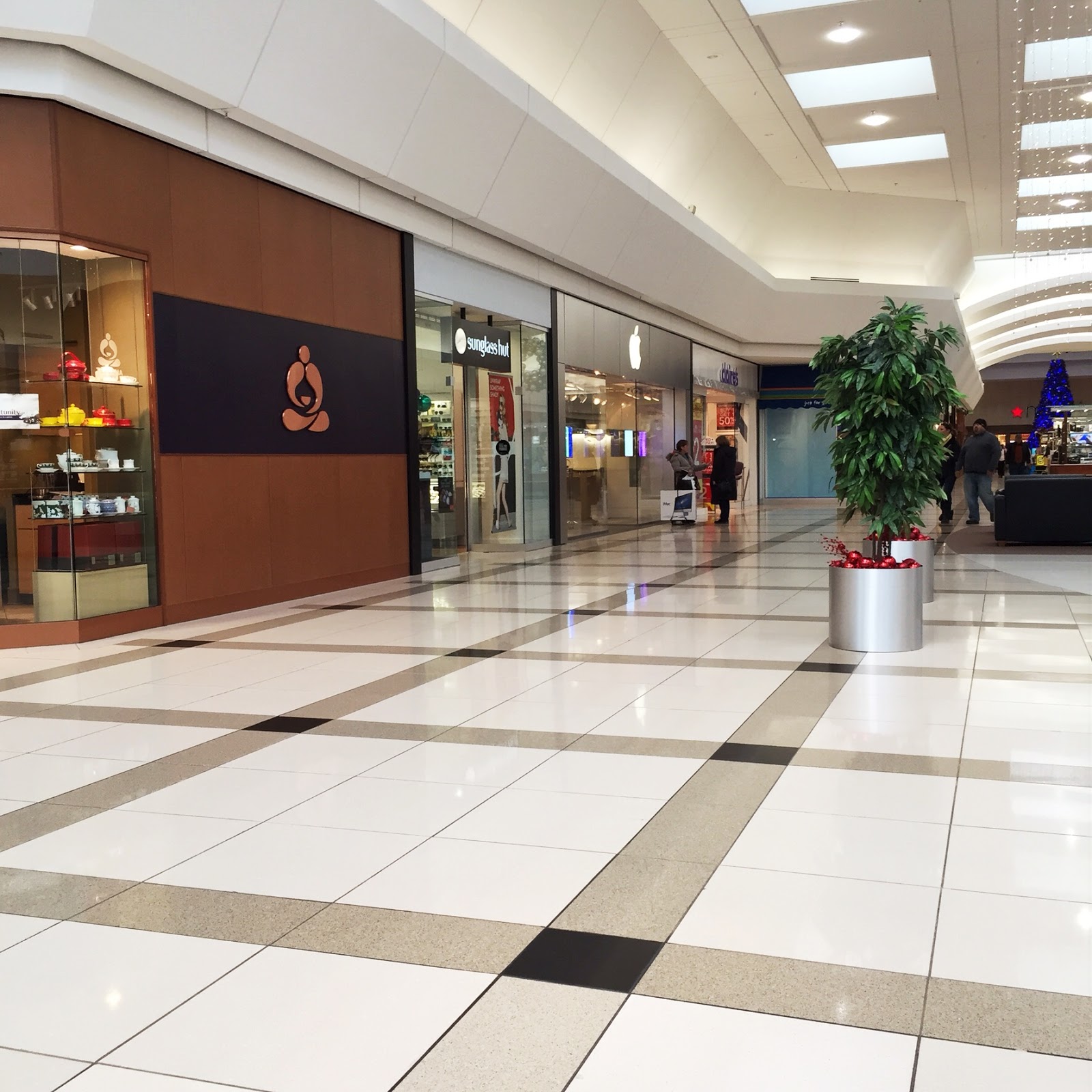 I was torn when I first came into the mall between going straight to the Starbucks to get a table before the opening of the store grids and gates at ten to see if there was a mad rush of people to get that shopping done early and quickly. Or stopping first at the Apple store before that got so crazy busy that you can barely squeeze in the door. I needed to pick up car chargers for Mallory and my new iPhones. The new phones hold charge better than our old 4s' but it is always good to have a car charger, especially with Mallory traveling across the cellular black hole of the Upper Peninsula. In the end I chose Starbucks and the opening of the gates over the Apple Store. I would risk my life and sanity a little later in the morning for the car chargers.

Although it must have been a little slow at the Apple store, since Apple employees in singles and pairs kept wandering into Starbucks to purchase their morning dose of high octane caffeine.

Lots of older people at the mall in the earlier hours of the day. All of them mall walkers. One particular gentleman caught my eye. He and his gentleman friend sat at the table right in front of me. I am quite certain my gentleman of interest has Parkinson's disease, I recognized the arm and hand tremors. His friend took care of getting his cream and sugar for his coffee so he didn't have to worry about carrying the cup. They sat and chatted for a while. When they were done the gentleman's friend was going to set off for home while my guy was going to do a couple more laps around the mall. Inspiring.

I had a couple of destinations in addition to the Apple store but they were for everyday necessities like mascara, books/magazines, and a quick stop in Victoria's Secret. I have most of my Christmas shopping done already thanks to the power of the internet. Having worked retail for a number of years I try to avoid the busy stores during the holidays as much as possible. One quick trip through Pottery Barn was also on the agenda. I love browsing through that store. Lots of lovely decorating ideas and I saw a cute little mercury silver egg cup when we were at the mall a couple of weeks ago that may be calling my name. 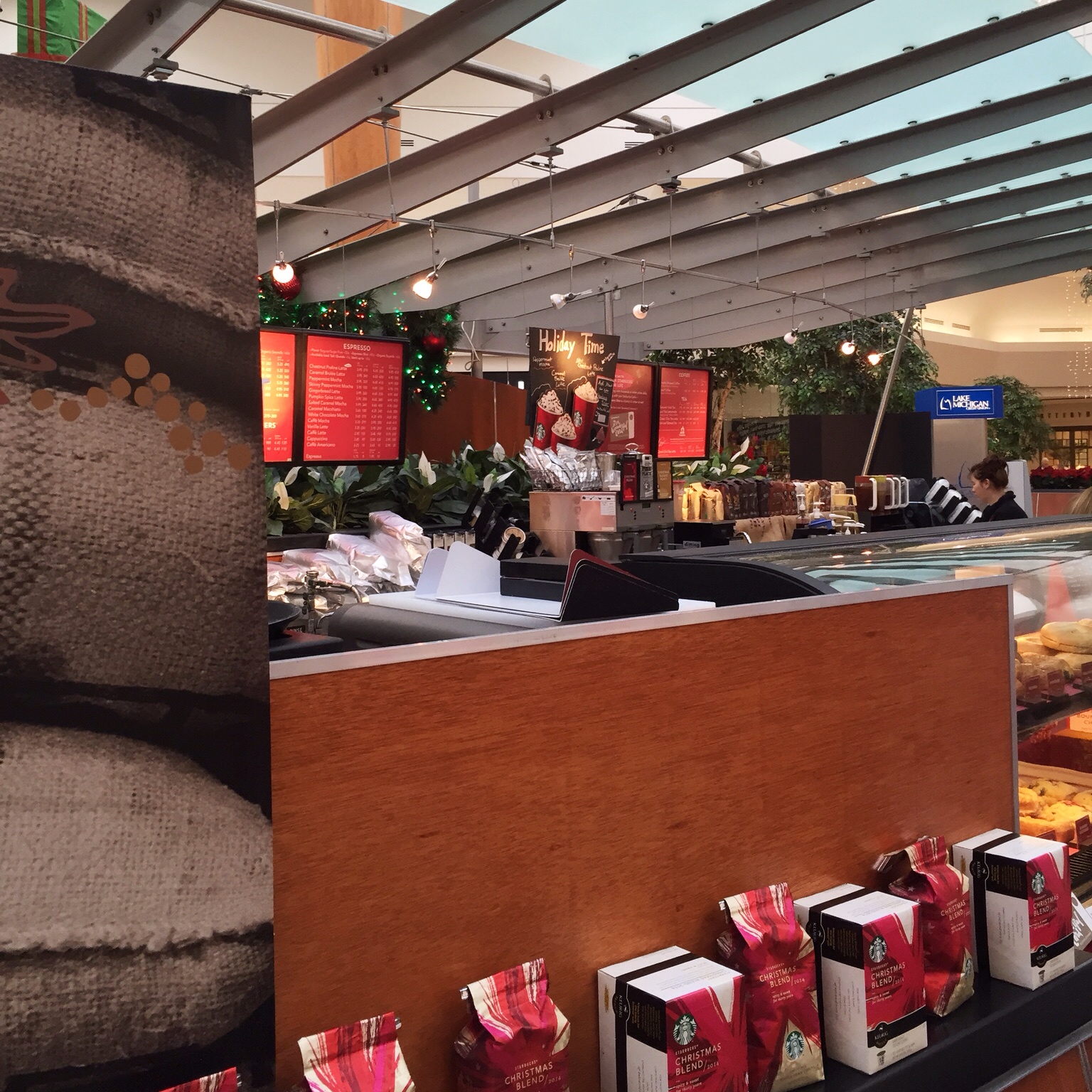 If you have read a few of these Coffee Shop Chronicles you will know my love/hate relationship with technology and the cell phone in particular. This edition has a classic example. The lady in line in front of me at Starbucks decided to call someone on her cell phone shortly before it was her turn to order. She was already laden down with three large shopping bags. She must have hit the stores that opened early before stopping for her morning hit of caffeine and then continuing on to the rest of the stores once they were open. She stayed on her phone while she ordered, briefly pulling the phone away to speak her order to the gal behind the register.  As soon as she ordered she was back on it, handing over her credit card as payment so she wouldn't need to speak to the order taker again. Her drink came up the same time as mine did at the pick up window. She stood blocking the whole pick up area, still on her phone while trying to put a sleeve on her to-go cup with one hand. I may have slightly bumped into her while trying to retrieve my Chai Latte. Oops. When I use to work behind the retail counter and people came up to check out while on their phones, I chose not to greet them because I knew they weren't listening anyway. When it came time to tell them their total, I would say it very loudly. I gave a sarcastic edged thank you as they left the store, still on their phone. I know I was rude but they were being just as rude. Kindness is returned with kindness and rudeness is returned with rudeness. As you can guess I don't miss working in retail, especially at the holidays. 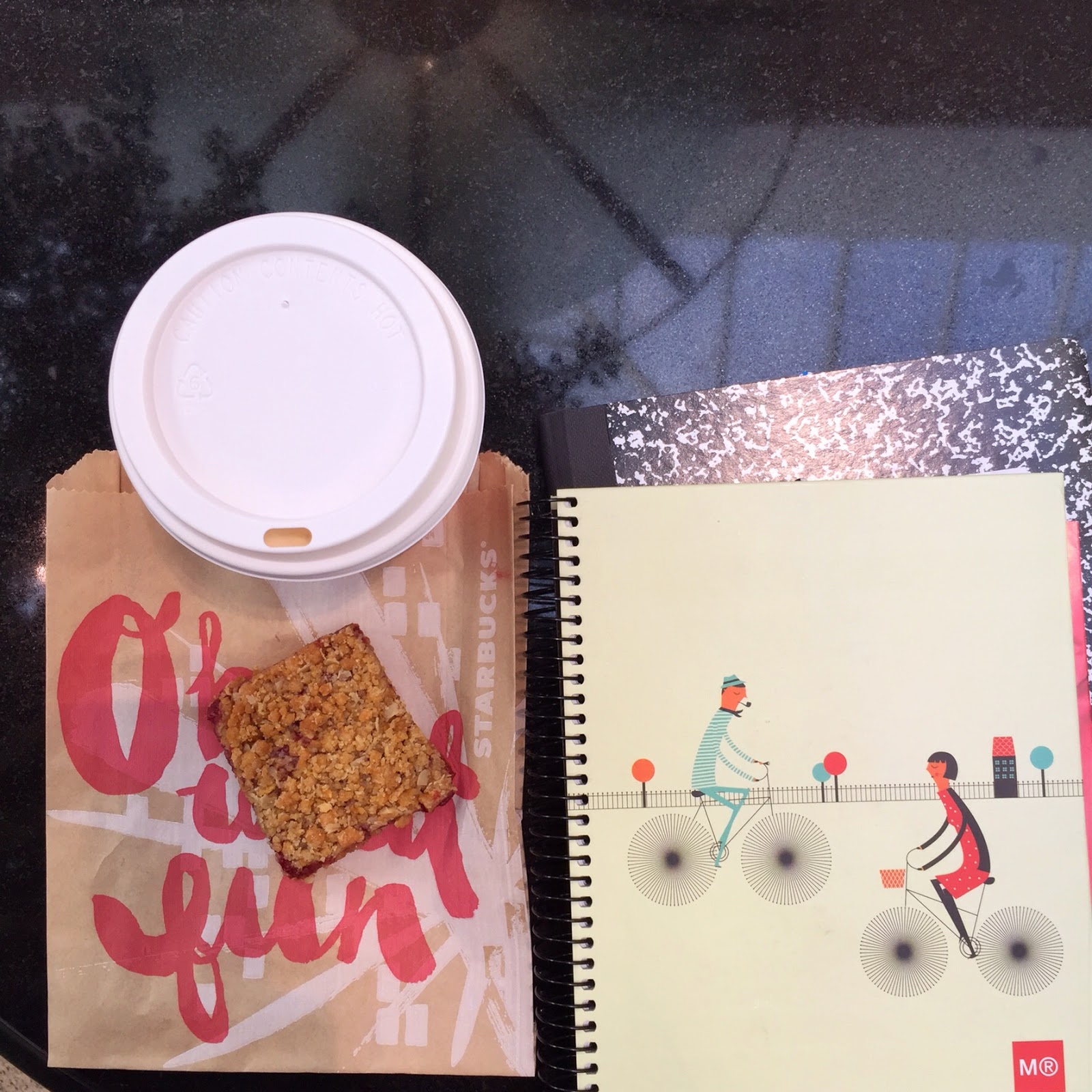 I was super unimpressed with Starbucks' presentation of my warmed Michigan Cherry Oat Bar. It was warmed just fine, but then plunked into this brown paper bag and tossed/handed to me over the counter. Then I had to dig the warm gooey mess out of the bag, use the bag as my plate, and use my fingers to break it up to eat it. Failing grade on presentation!

By eleven o'clock the mall was starting to get busier. Moms with little ones held by the hand and pushing strollers were gravitating to the children's play area which was right next to the Starbucks. I was never one to let Mallory play at those things. Too many germs all over the place from the drool and snot of other playmates.

In case I don't make it back before Christmas, I wish all of you the happiest of holidays and a very Merry Christmas.