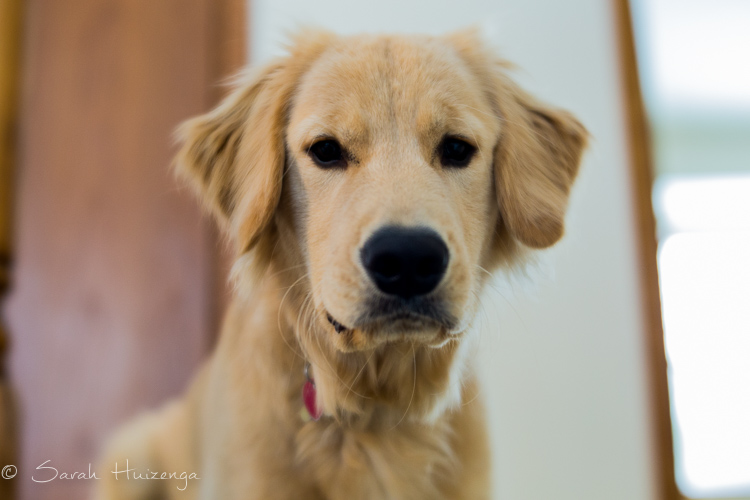 Late last fall, I purchased the Lensbaby Velvet 56. Lensbaby was having a pre-Christmas sale on some of their lens. I have always been intrigued by them, but wasn't sure if I was ready to be that brave and different. The sale was too good to resist (Merry Christmas to me), so I clicked "purchase", and waited for my new lens to arrive.

The demo video that sold me on it, showed beautiful, shallow depth of field portraits of people, hmm... self portraits? My daughter? and of dogs...Findley?

As soon as it arrived via UPS, I sliced open the box and put it on my Canon 6D. Findley...where was Findley? What I wasn't prepared for, was the manual focusing, and I total skipped over the fact that I had to manually set the aperture. Let me say, manually focusing on an energetic puppy, well...the photo says it all.

I slid the Velvet 56 into an empty lens slot in my camera bag, and returned to my 35mm auto-focus lens. The Velvet 56 would stay in the camera bag until this month. 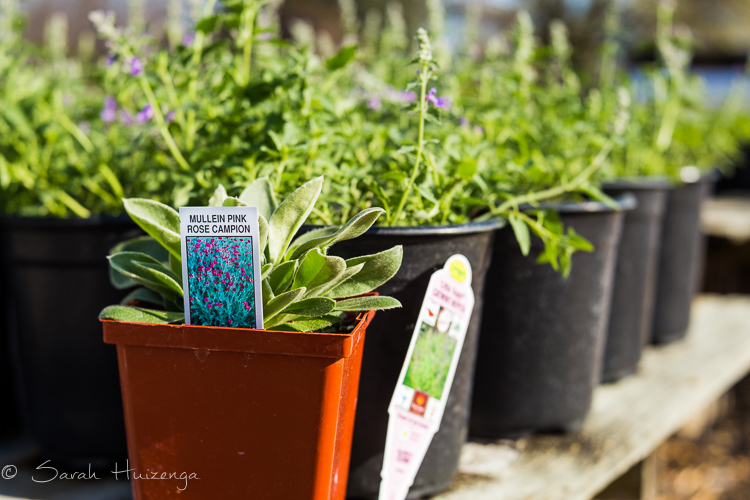 April, a new season, and new subjects to photograph. I dug the Velvet 56 out of the camera bag. I did not go looking for Findley, instead I went to the garden center.

I do get frustrated with not being able to do something well, but rarely do I give up, so I watched some Lensbaby videos and actually learned what to do with the Velvet 56, there was that bit about manually setting the aperture. 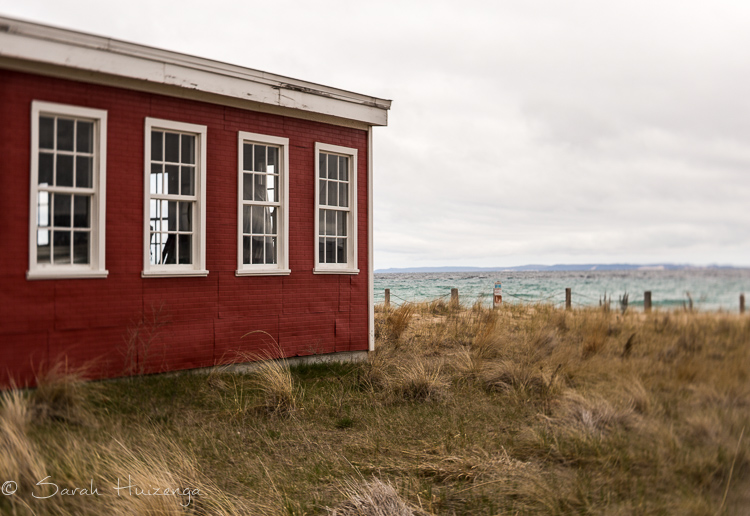 A successful outing at the garden center, and I was ready to try the Velvet 56 on a trip. I was tagging along with my husband on a business trip to my favorite part of northern Michigan. A good place to try the lens, on things I know and love, and have photographed many, many times. I was looking for a different approach to these places. 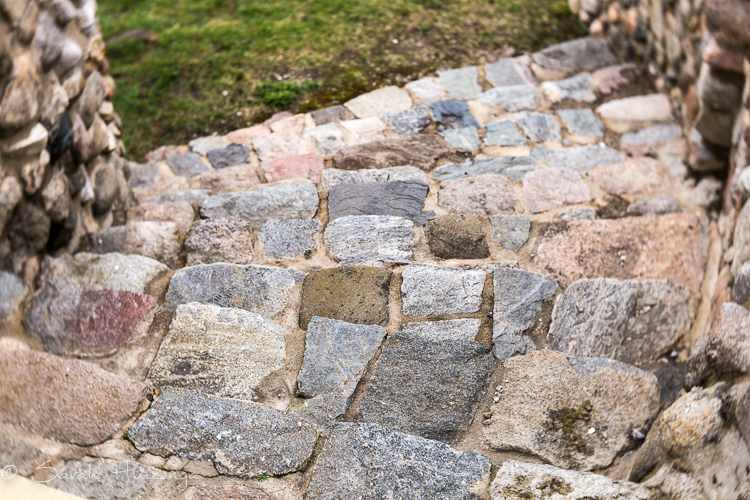 The Velvet 56 stayed on my camera the whole time we were gone. This time the 35mm stayed in the camera bag. 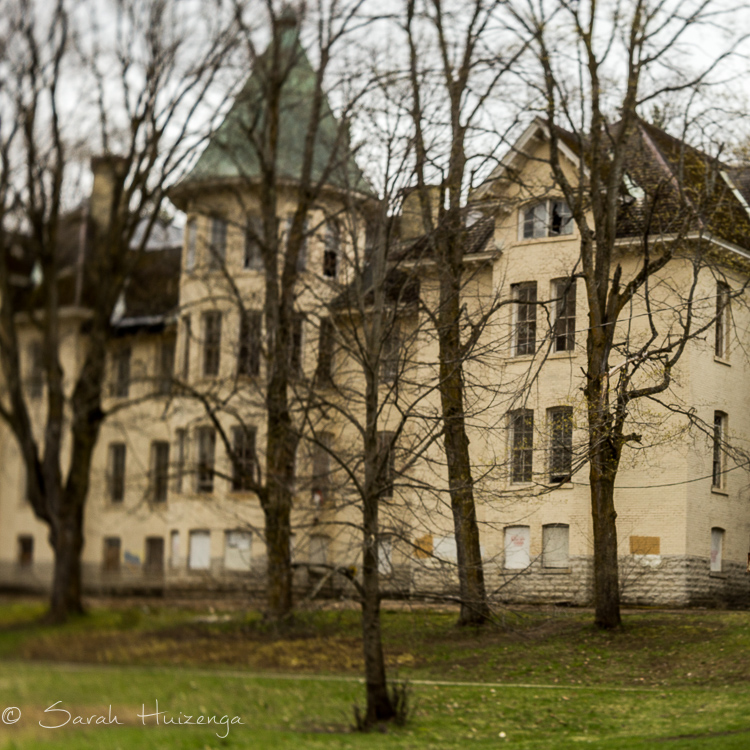 I still have more to learn, more videos to watch, and more practice is needed, but I love the look I am achieving. The Velvet 56 sees the world the way I do - one spot of sharp focus and blurry around the edges.

My husband and I are leaving for vacation in a couple of weeks. We are going through upstate New York, to Boston and to a photography conference in another part of Massachusetts. I have a feeling the Velvet 56 will be getting a lot of use. 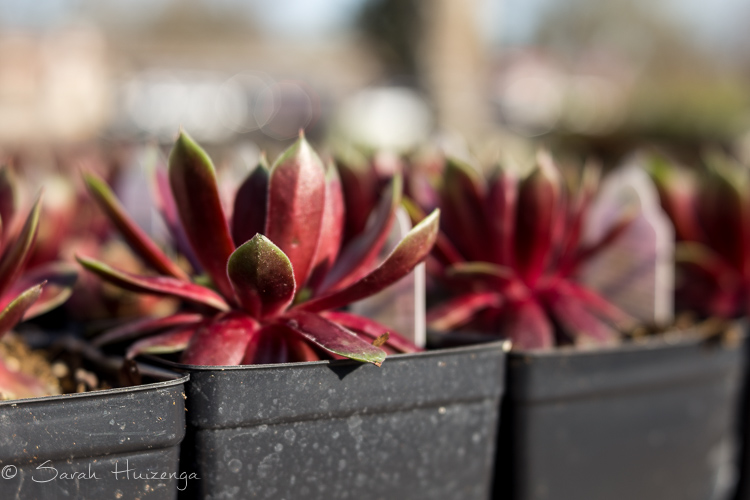 I just finished a book that I can't stop thinking about, Chasing Slow by Erin Loechner. Erin is a Lifestyle Blogger who shows us through her blog what a beautiful life we can all have. The book however, takes us behind the curtain, into Erin's real life, a life anything but always picture perfect. Her honesty, and writing won me over from the first chapter.

But it is the title that I keep coming back to Chasing Slow, something I am forever doing. My middle name is Get It Done, I can enjoy it later. But what if later never comes, how many things have I sped through to cross them off my list...done. 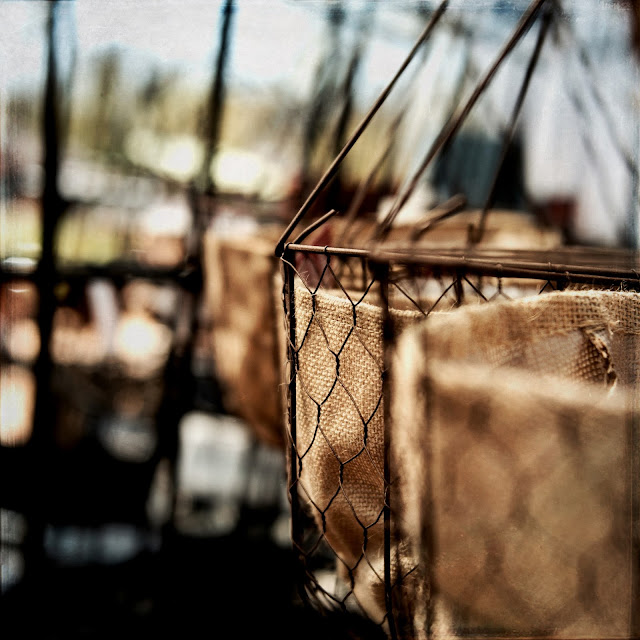 Slow is never going to be easy for me. I take after my dad, a man in his eighties still out cutting firewood to add to the multiple rows of firewood he already has. And maybe that is what keeps my dad going and why he is still alive in his eighties. But when we were sitting in the hospital waiting room last summer we talked, there are so many things he wishes he had done. I don't want to have those same unfulfilled wishes in my eighties. 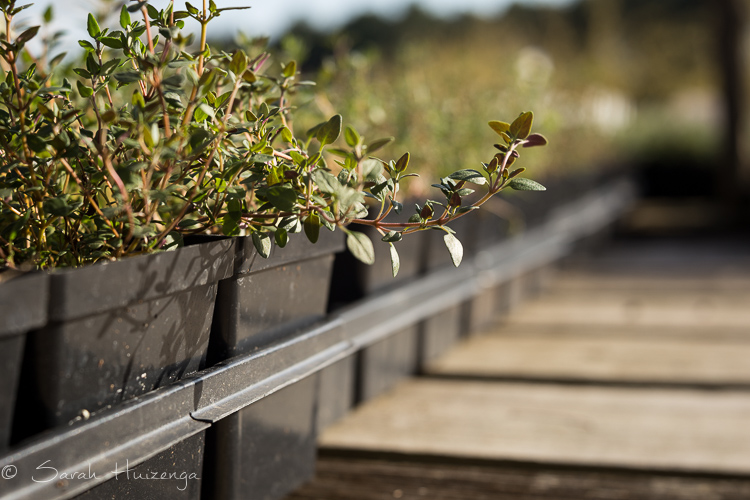 This week I took my first step toward practicing slow. I went to the Garden Center, to buy some plants for the weed-riddled flower bed I pinky promised my husband I would maintain this year. Instead of buying the first plants that met my criteria: full sun, not too tall, long blooming. I took my camera and wandered. I did ask permission to photograph first, which was met with a pleasant, "Of course you can, and if anybody gives you any trouble send them to me". My new best friend Kathy, doesn't know what beast she just unleashed. 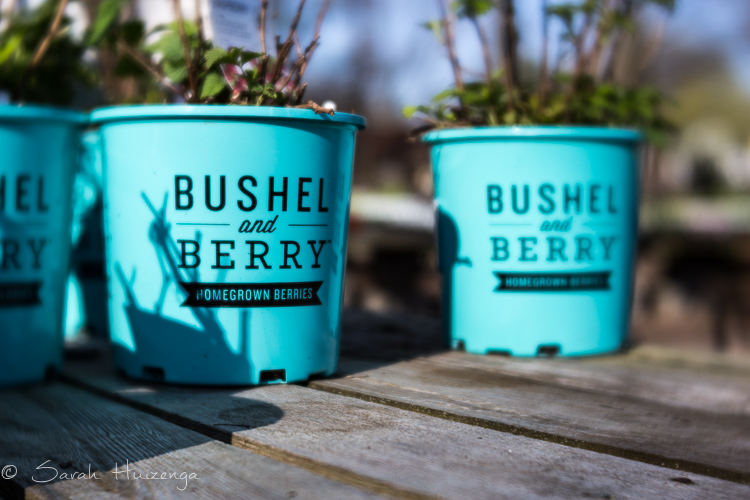 What did I discover as I wandered? I love containers more than plants. Put a plant in a container and then I am in love with it. I never would have discovered this if I wasn't practicing slow. 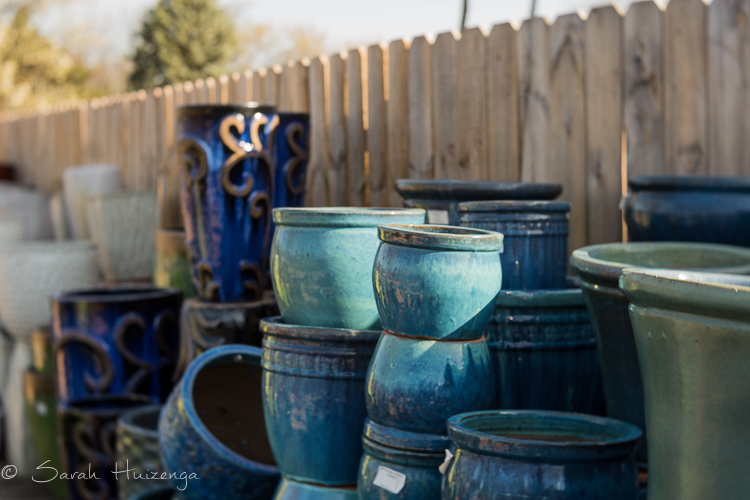 Photographing flowers in my own garden, or anybody else's garden will never delight me, but let me loose in a garden center with plants in pots, or just pots, and I could really start to enjoy gardening.

I am going to keep practicing slow at the garden center, because that weed-riddled flower bed needs a lot of help, and I want to see what other revelations slow reveals.
Posted by Sarah Huizenga at 1:00 AM 11 comments: Can you make a wish in a fountain that has no water? Is it the water that makes a wish come true, is it the penny, is it the fountain? Or is it the person who believes in magical things.

Standing with penny in hand, ready to throw, I ponder this thought.

The fountain in front of me is filled with last autumn's leaves, crumpled candy wrappers, and pennies from the past, but no water. Will adding my penny make any difference?

What things will I wish for if I throw my penny?

I wish...
--to stop trying to figure out either/or and be content being both a photographer and a writer
--for a long and happy marriage
--for my daughter to find someone who cherishes her. Don't we all deserve that?
--to travel near and far
--to have a dog like my dear Scout again someday
--to have a cottage on a small lake with a dock, where magical things happen
--to be involved in art retreats for women

We don't get all our wishes, and some of our wishes will change over time, but we must keep collecting those pennies and tossing them in fountains, whether they have water or not.
Posted by Sarah Huizenga at 1:00 AM 11 comments: 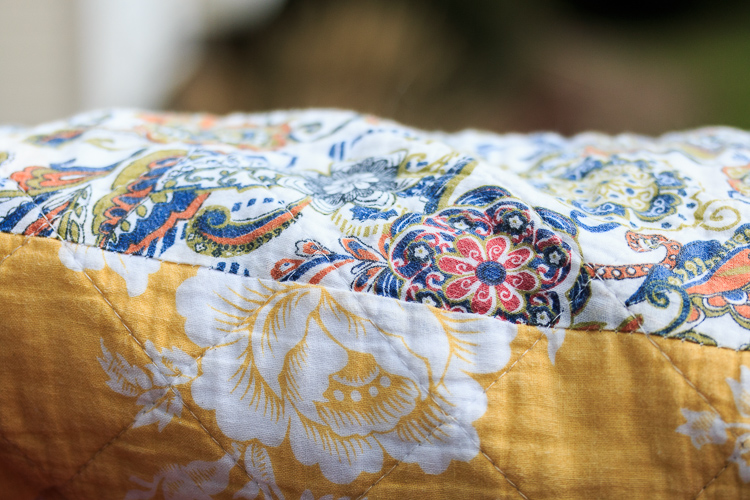 I type the word Pleasures into the search bar at the top of my Pinterest page, a little afraid of what I am going to find. My writing directive for the day is Pleasures, and my notebook of pleasurable ideas is a little soggy at the moment, so I thought I would look and see what brings other people pleasure.

I click enter. The first photograph is of a well thought-out picnic on a riverbank; on a salmon-colored tablecloth sets a wicker picnic basket with a french baguette peeking out the top. There is another baguette on a wooden cutting board, partially sliced. There is a stack of salmon-colored salad bowls awaiting the freshly torn lettuce in the serving bowl next to them. Multi-colored cherry tomatoes sit on a cream-colored snack plate. Six glass jars hold various salad toppings. Salmon-colored linen napkins, along with real silverware are ready and waiting to be used. I find pleasure in this idlic scene, especially if someone else made all the food and laid it out for me.

Continuing down the page of pleasures, I see there are mostly pictures of food, apparently food brings a lot of pleasure.

Then there are fuzzy, yellow ducklings walking in a line down a perfectly mulched garden path, lush green grass on either side of the pathway. That would bring me pleasure too until one of the ducklings poops on the perfect path and ruins my photographic moment.

The next non-food photograph, sort of, is of three kids sitting on the tailgate of a vintage, red delivery truck, half slices of juicy, red watermelon in their hands. Their faces and shirts are amazingly juice free.

As I look at all these flawless photographs, I know that none of them would be the things that  bring me true pleasure, except maybe the picnic. But mine would be paper plates, plastic silverware, an old faded quilt, plastic red Solo cups filled with a favorite white wine, and plastic containers with fresh pasta salads from a local deli. Sitting on the faded, old quilt would be my husband and myself enjoying a perfect date day.
Posted by Sarah Huizenga at 1:00 AM 16 comments: 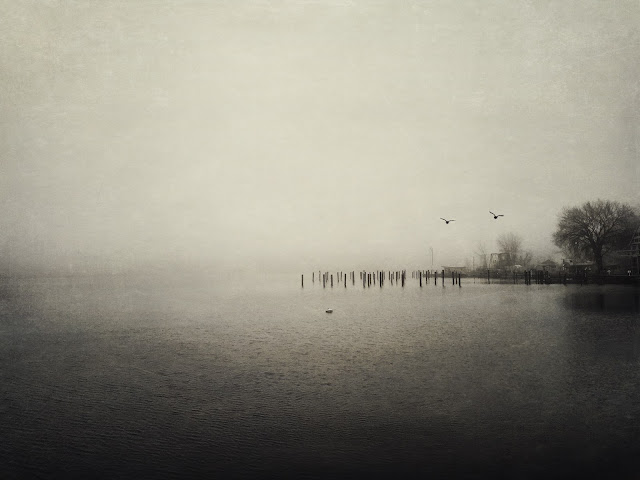 Too bad you can't take a photograph of accomplishment, because accomplishing things has been my goal in March, and I have succeeded.

This might be one of my all time favorite photographs that I have ever taken, it was taken with my iPhone and edited with the app. Stackables. It was taken on the first day of March, thick atmospheric fog enveloped objects along my walk to the beach.

I love everything about it - the pier posts dancing in the water, the buoy that looks like a bobber, the two mallard ducks that flew into my frame at the perfect moment, the leafless trees, the processing that lends that perfect foggy morning feel.

One of my accomplishments in March was to get this photograph printed. I must admit I have never had many iPhone photos printed, and the ones I had done I wasn't that impressed with. But I think that was my early tendency to process everything with an overly warm cast. I have since developed my own slightly cooler style.

I started with having a 5 X 7 printed, big enough to get a good feel for the photograph, but not too expensive in case it was a disappointment. It was not! So I thought I would push it and try an 8 X 10 and an 11 X 14. Both are fabulous! The 11 X 14 is in a black frame with white matting waiting to be hung on the wall in the family room. The family room is waiting to be painted a nice Simply White. That will be next month's accomplishment.


An InLinkz Link-up
Posted by Sarah Huizenga at 1:00 AM 21 comments: