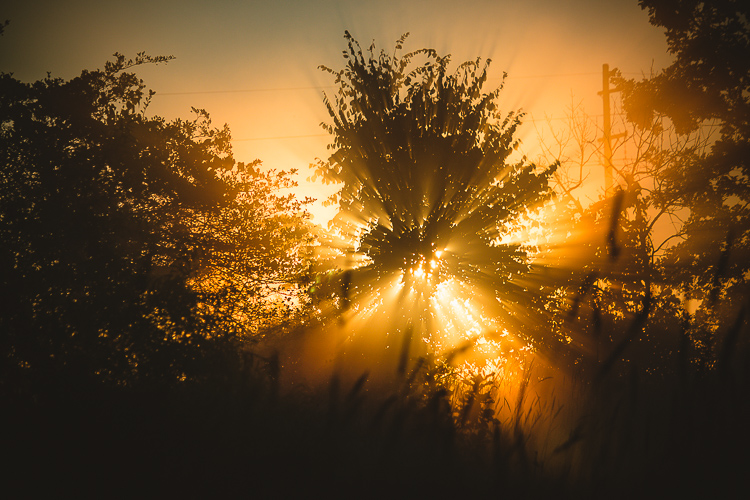 "The dream of my life is to lie down by a slow river and stare at the light in the trees."

Back in an early June post titled Summer Projects, I talked about my creative plans for June and for the summer. One being a film project, and one being a photography  project. Both were fun for the month of June. I did complete 30 days of filming, but have yet to finish editing the film. I am not too worried, I know I will get it done. 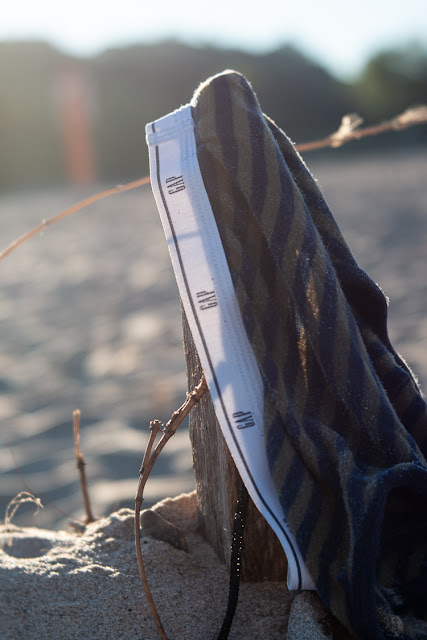 The other project, a summer long project - Abandoned Artifacts - was/is to be shot mostly at the beach, documenting the stuff people leave behind.  Mateless flip flops have been at the top of the "lost" list, but there has also been a stroller, a broken shade tent, a whole pan of watermelon pieces, and a pair of men's GAP brand underwear. But what pushed me to take a break for a while was a whole Fourth of July feast abandoned along the boardwalk, I know it was abandoned because I found it the next morning at 7 a.m. It became the seagulls feast.

Abandoned Artifacts became just plain trash left by people that don't give a s**t. It became too depressing. I had to find someplace new to walk for a while. I needed to find beauty and joy. 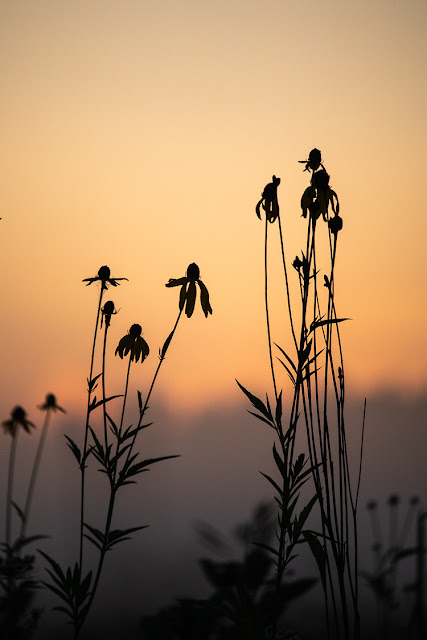 I returned a couple times to the meadow where I shot last summer's Meadow Project. It felt good to be back photographing wildflowers in the early morning light. But something was still missing. I wanted more sunrise without the barrier of large pine trees, I became a bit addicted to sunrises last year. So, I moved to a new meadow, one that is completely open to the rising sun. 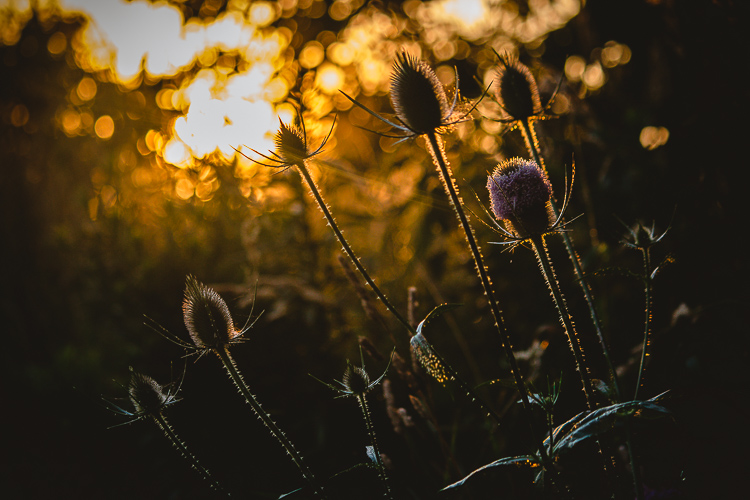 This meadow takes more commit from me to get the shots I want. It is probably a twenty minute drive from my house. With sunrise at 6:22 a.m., I am leaving before six o'clock. Thankfully at that time of the morning there is very little traffic. I need to monitor the weather conditions: clear or cloudy skies, temperatures (cool nights create lovely ground mist). I must remember to pack the bug spray (mosquitoes are plentiful), and pack the rain boots for the dewey grass. 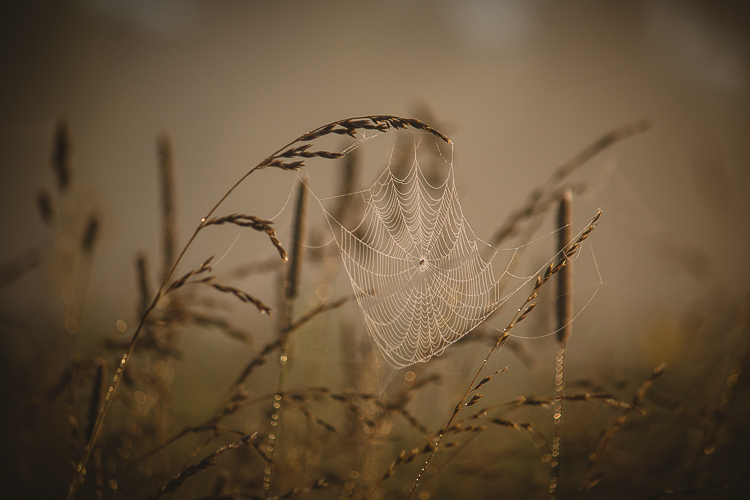 This meadow has a long winding paved path, no nice little circular loop like the other meadow. I won't shoot without my tripod, so that means carrying it or putting it in the holder on my back pack. 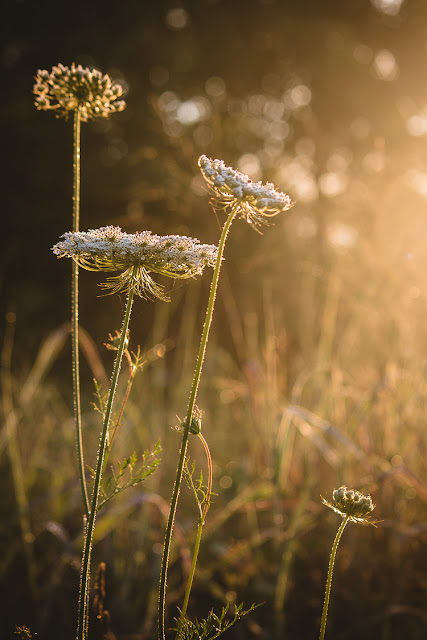 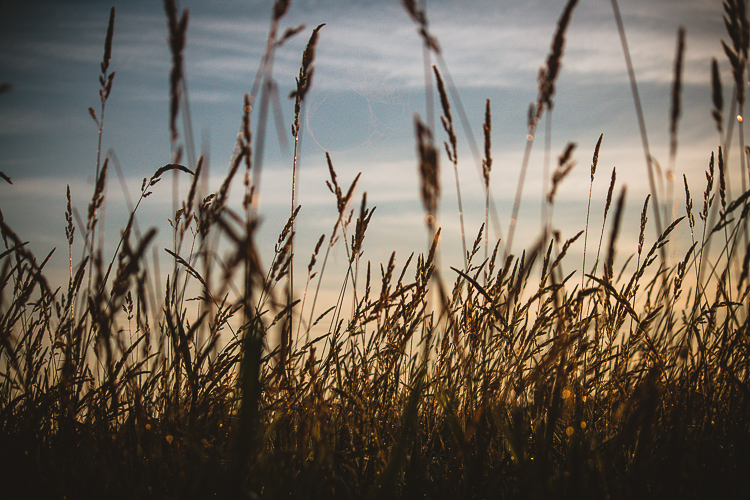 I will go back to the beach and the trash abandoned artifacts, but I might spend the rest of July playing in the meadow.
Posted by Sarah Huizenga at 1:00 AM 19 comments: 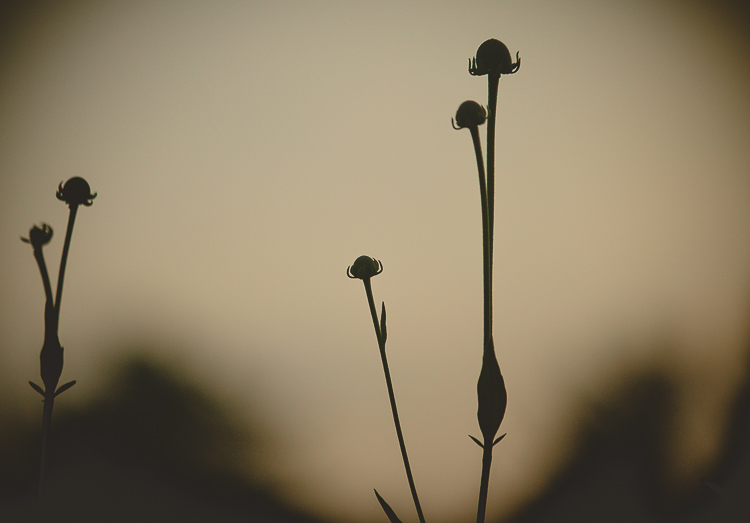 "A true artist is not one who is inspired, but one who inspires others."

Each summer the urge to create with my hands becomes very strong. I create with my eyes and my camera every single day while I am doing this 365 day photography project. As of this post I just completed Day 315. Truth be told, I am getting tired of it. The limitation of shooting for 365 days with only one lens, is getting well...limiting. But I am in the homestretch, I will finish this project on September 2nd. At this point I am unsure if I will start another 365 project or let it rest for a while. 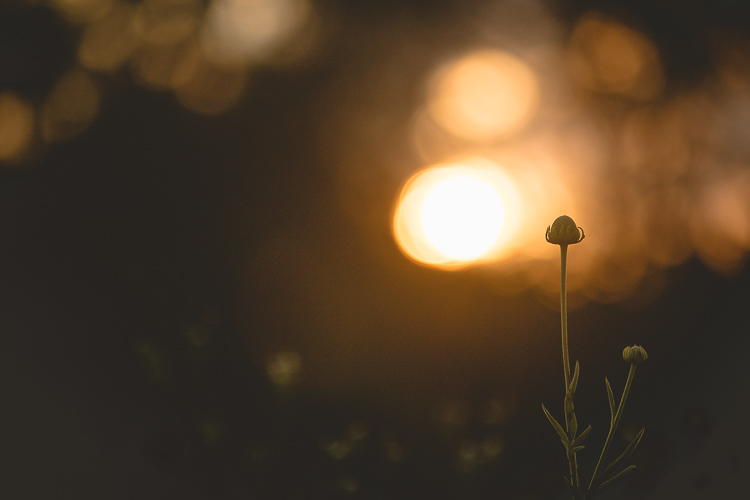 I think the urge to create with my hands in the summer comes from the fact that I hate hot, humid weather, and even in Michigan we seem to have plenty. Also the sun shines so bright everyday that my time to photograph outside is very limited. The rest of my time is spent in the house. Having a clean house brings only a certain amount of joy. So instead I turn my attention to the multiple bare walls, being a photographer you wouldn't think this would be the case. And I do have some of my photographs up, but I want a little more variety than just photographs, and I have a hard time buying things when I know I can make exactly what I want. 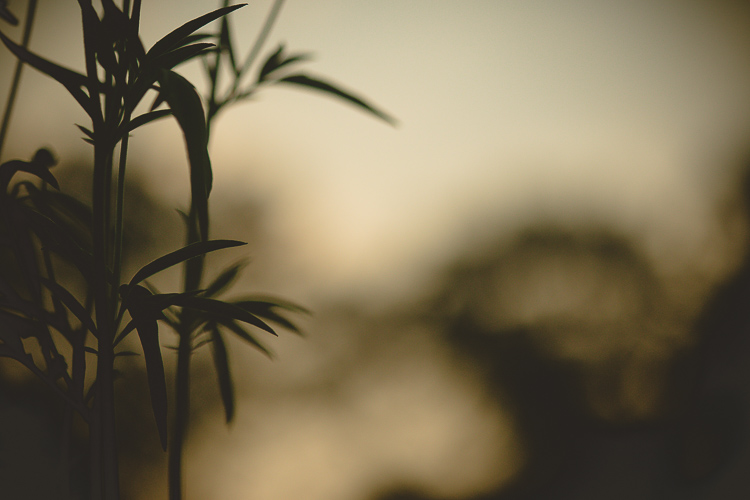 For the perfect haven to create art each summer, I unscrew the legs from my IKEA farmhouse table, haul it upstairs to my porch, and reassemble it. I spend a tremendous amount of time buying and organizing art supplies so that I have everything I need close at hand. I roll my desk chair up to the table, put a coat of paint or plaster on a wooden cradle board, glue some collage paper down in various parts of the board, and then let it rest while I figure out what to do next. It rests all summer. Then in October I put all the supplies away, unscrew the legs of the table and haul it back downstairs. Another season of not becoming. 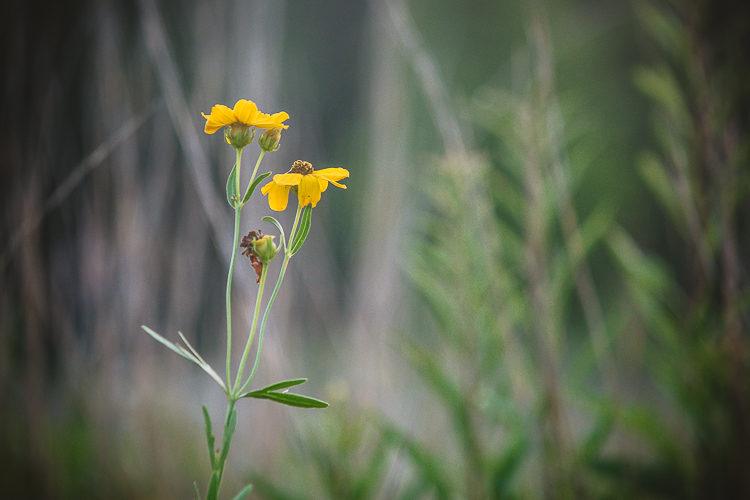 But this summer is going to be different. Maybe in part because I turned 50 in June. I spent my 40's learning, now I want to do something with all that learning. This year is also different because I found an on-line art class teacher that does more than show me how to create the assigned project. She also talks about her creating process, what of herself she infuses into each piece of art. Sharing her art philosophy has helped me to find my own.

The two art classes I am taking are: Poetic Plaster and Wax and Inspired Collage. The teacher that has inspired me is Petra Hrziwnatzki. 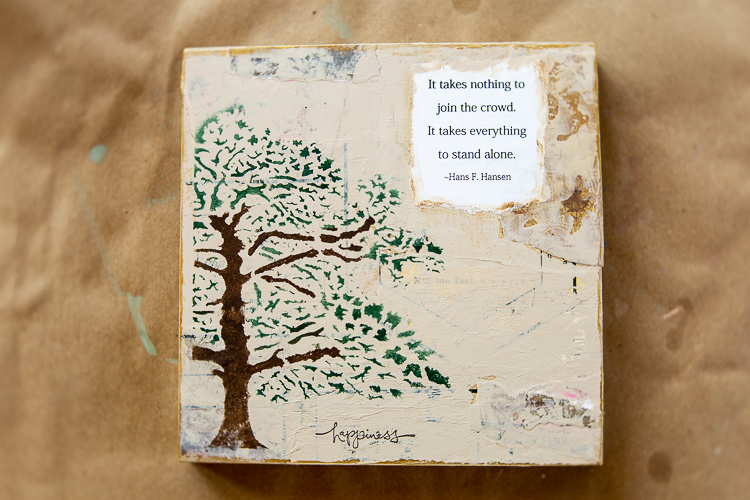 On Friday, for the first time ever I completed an art project from a class. While I still have miles to go before I am ready to open an Etsy shop, I have taken the first steps toward my dream of becoming an artist.

Confession Time: The blog post I had originally started to write this week was titled - Departure. I was planning on shutting down this blog. After six years of regular blogging it felt time to call it a day. But then I started Petra's class and I realized that just as she is inspiring me, my time of inspiring others may not be over yet. At some point in time, I will probably transition over to the blog on my website, just for the convenience and the quality that Squarespace offers. Some may not stay with me through the change, but that's okay, I would rather evolve and continue to change than stay the same to please others.
Posted by Sarah Huizenga at 1:00 AM 17 comments: