Passion for the Coffee Bean

You just know when people are passionate about what they do. There is a physical change that comes over them as they start to talk about something they love to do. Their eyebrows go up, there is a twinkling light in their eyes, and a smile that stretches from ear to ear. In their voice is an unbridled excitement that makes you sit up and think "I am about to hear something REALLY good".

I was fortunate enough to meet some people last week who are passionate about coffee roasting. 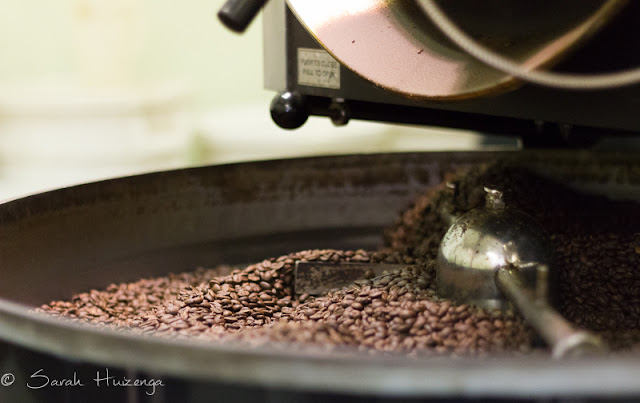 Thanks to the bull dog persistence of my friend Jane and the graciousness of the staff at Uncommon Grounds in Saugatuck/Douglas. Jane and I were about to go to their roasting facility in Douglas and take some pictures of the roasting process. 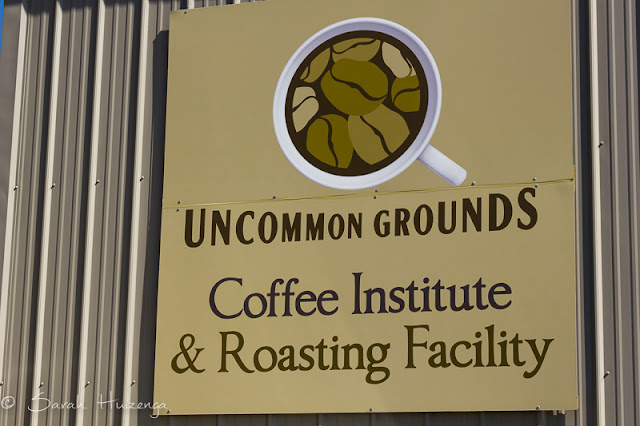 I went on this adventure with only the intention of taking some pictures and writing a blog post about the adventure, similar to Walk and Click Photo Walks that I have done in the past. Little did I know that a whole new blogging series would be born. 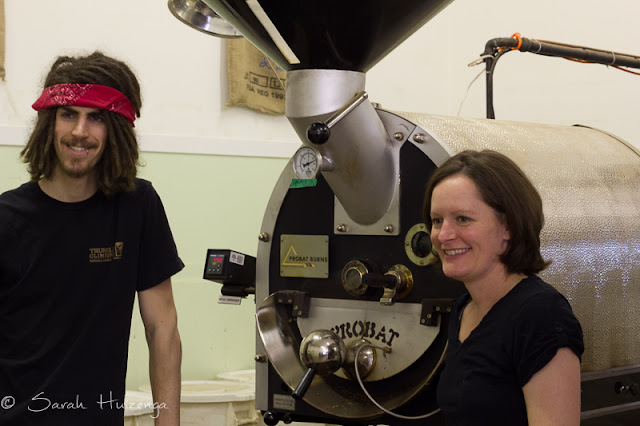 John was the roasting instructor for our visit. He has been roasting for two years and seems to have quite the touch for it. 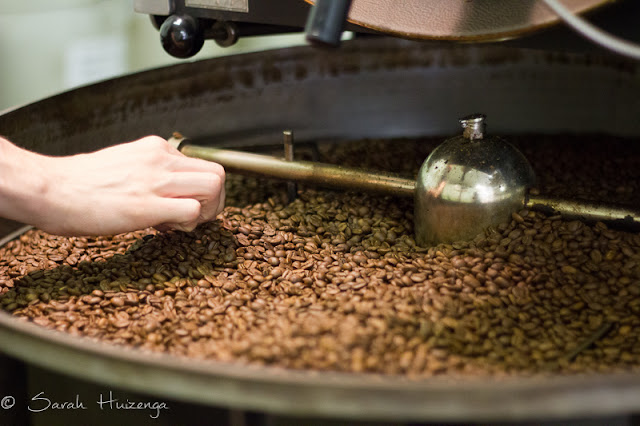 John went to a local university and majored in Spanish. He admitted to me he chose that because it came easy to him in high school and he wasn't really interested in anything academic. Then he said something that echoed my own words for the last two years as my daughter has struggled to decide on her major. He said "What 18 year old kid knows what they want to do for the rest of their life?" Seems like John has found his spot, at least for now. 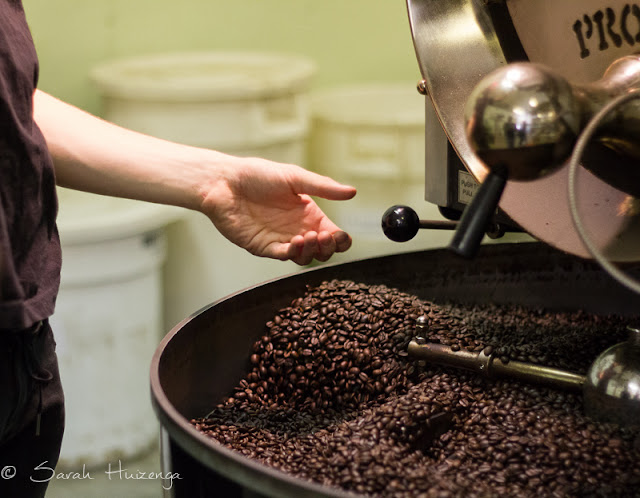 John says his Spanish has come in handy when they go on coffee bean buying trips.

The day that Jane and I visited was a lighter load roasting day, so they were using the smaller roaster at their facility. 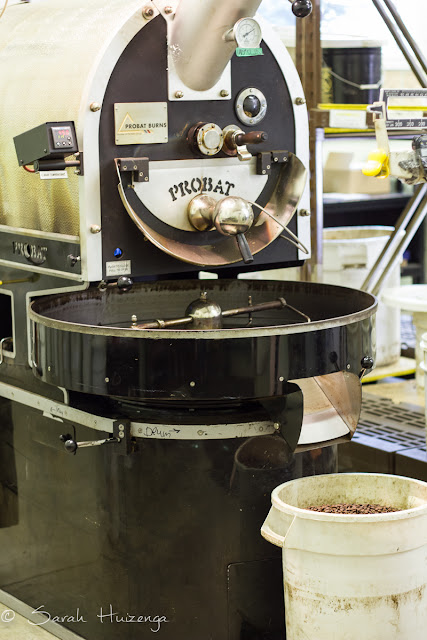 On heavy load roasting days they use the large roaster. 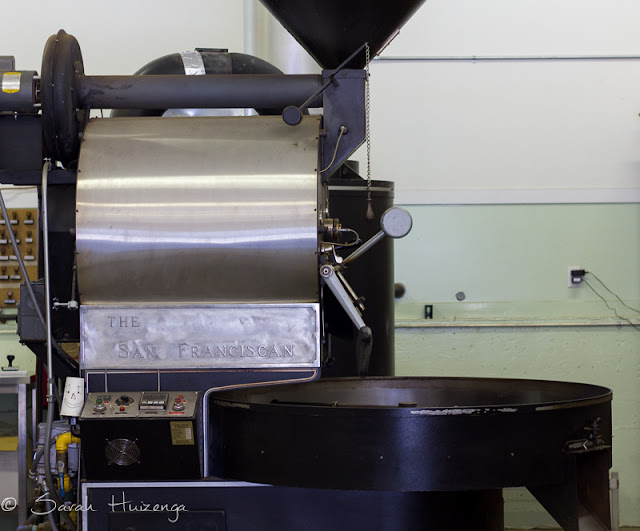 Such an interesting process to watch, and John was keeping meticulous notes. 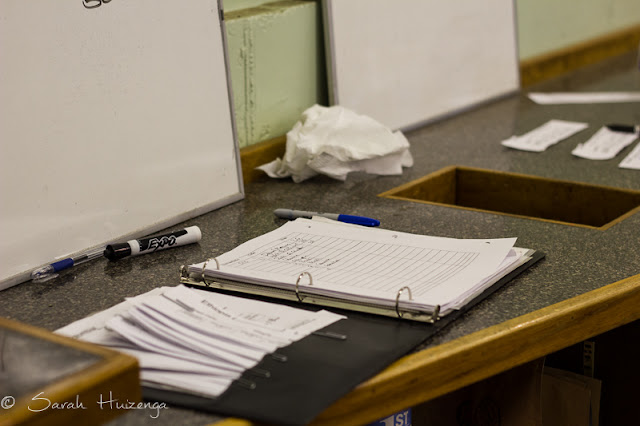 Now while John was roasting, Danielle was extra busy bagging the roasted beans, as well as, answering the phone and working on the computer. 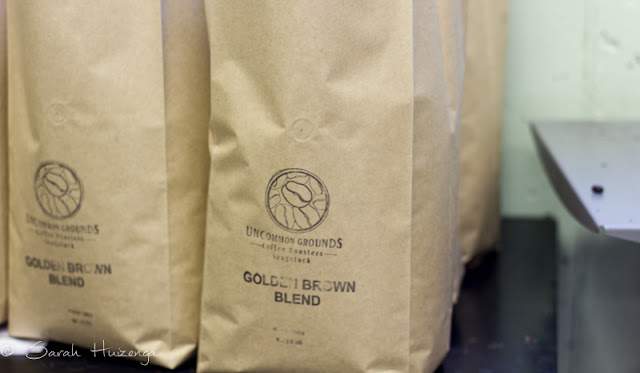 They stamp their own bags. As someone who has a rubber stamp or two, I had to take some shots of their stamps. 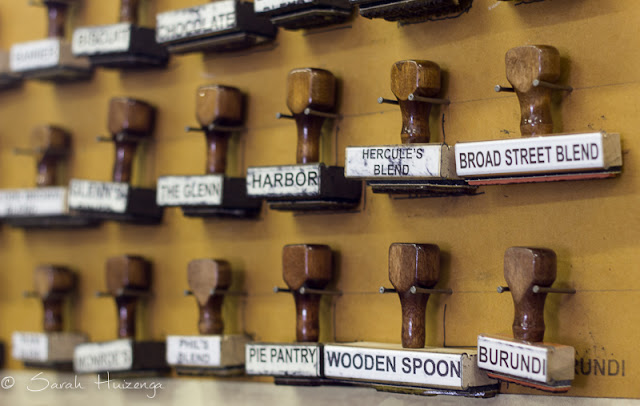 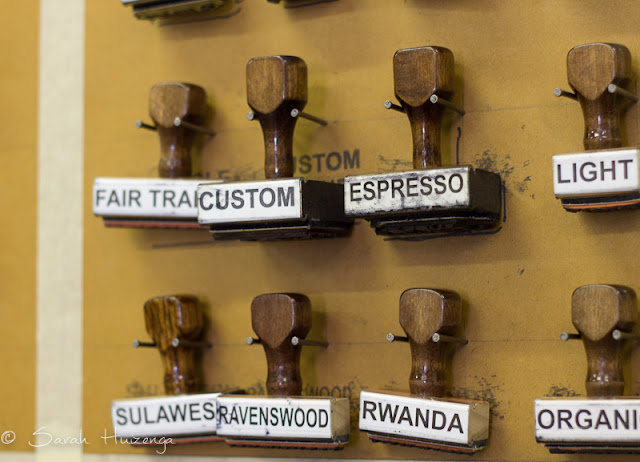 Near the end of our visit, the owner stopped by and we were fortunate enough to talk with him for a few minutes. In this conversation the passion was evident again. He has been in the coffee business for nearly 20 years now. A few years ago, he was starting to feel a little burned out in it all. Then he really started getting involved in the lives of the farmers and their families that he buys from. Those relationships have made a huge difference to him. You can read about their trips they take each year here. Also on their FaceBook page they have great pictures from their trips.

They also offer coffee classes, so if you live in the West Michigan area and love coffee, this would definitely be something to check out. I think it would be fun to go back and take pictures at one of these classes.

I want to say a BIG thank you to the staff at Uncommon Grounds for letting us come take pictures and ask questions. It was such a unique and wonderful experience.

On the way home I had to stop at their Cafe...I love their Vanilla Latte. 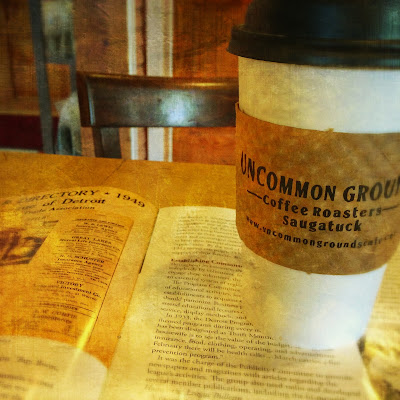 I also needed to buy some beans to bring home... 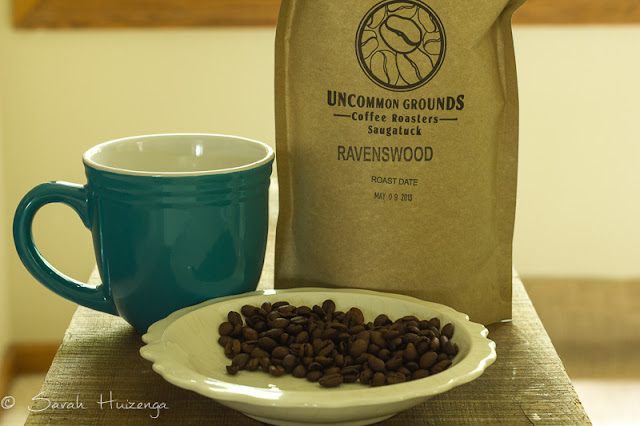 The Invasion of the Tulip Time Tourist

It is Tulip Time Festival week in our lovely town. The weather couldn't be more perfect, especially given the cold and nasty Spring we have had. The tulips are in their prime, the sun is shining, the temperatures are in the 70's and the tourists are a happy bunch.

In a wonderful FB group that I belong too, that is filled with wonderful creative women, we have started a weekly creative prompt challenge. Many of us were feeling in a creative funk, and I wanted to get things stirred up, for the group and for myself. So we are taking a weekly prompt and creating something with it, whether it is a photograph, a poem, a story, or a blog post filled with one or more of these things. We are then posting it back in our group to encourage and share with each other. This week's prompt is AMUSING.

There is almost nothing more AMUSING than people watching, and this week our town is filled with them. So I thought I would share with you some AMUSING shots I took this week. 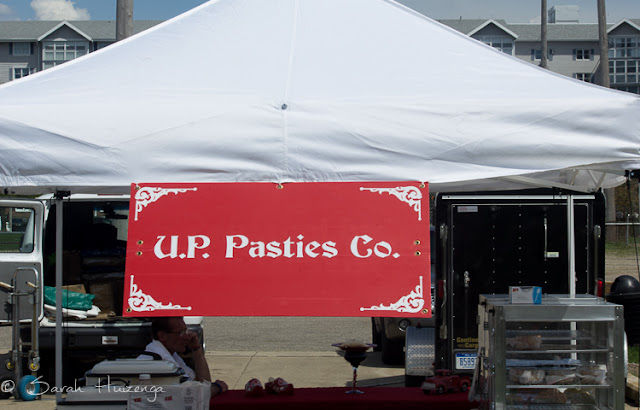 This one caught my eye right away. At a festival that is celebrating Dutch heritage, you have Pasties from the Upper Peninsula of Michigan. Yet there was not one vendor selling any Dutch food. 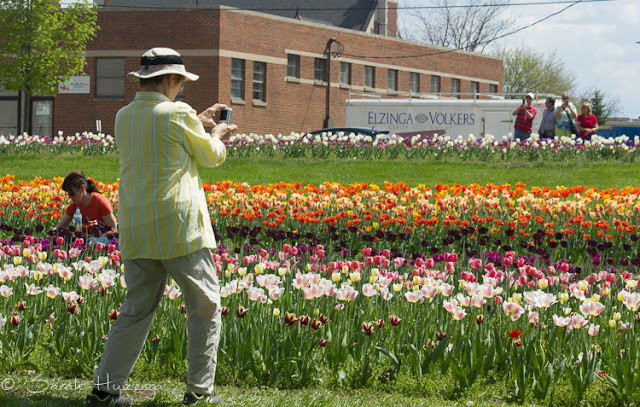 This lady had the stance down for her shot. I have always loved watching older people with this new technology "the digital camera". 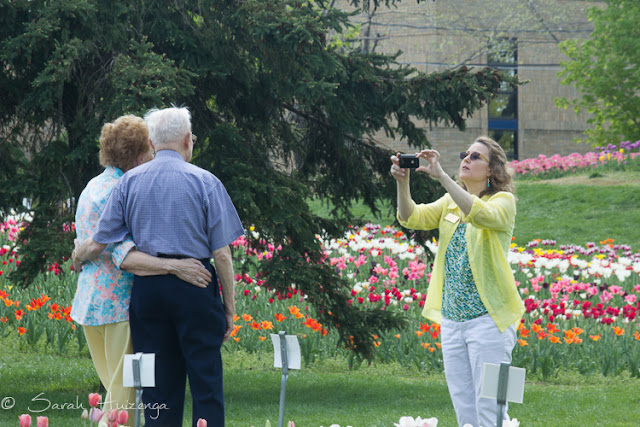 My daughter has a very big infatuation with long married couples, so I partly took this for her, but also because they were so cute. From what I can gather from the conversation I overheard, they are from a local retirement community and came on a bus outing. The lady in yellow was taking their picture so that she could text it to friends of this couple that weren't able to go on the outing. I am not sure that the couple knew what texting was :) 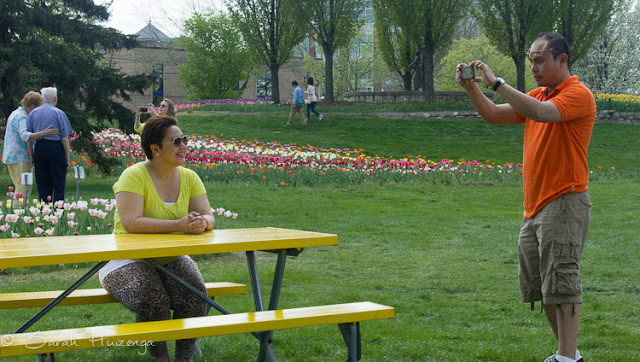 Obviously they do not have picnic tables in the town that these people are from. 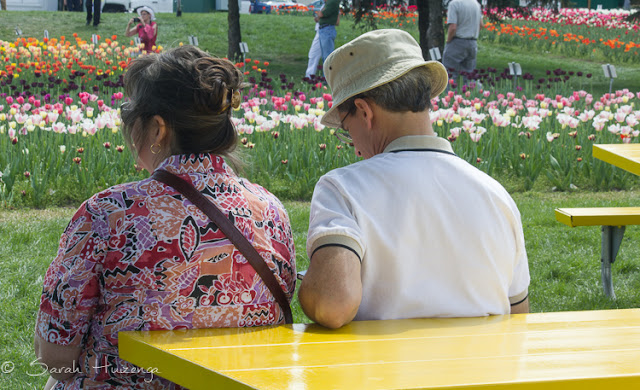 This couple was happily sitting side by side, both doing stuff on their phones. Oh technology! 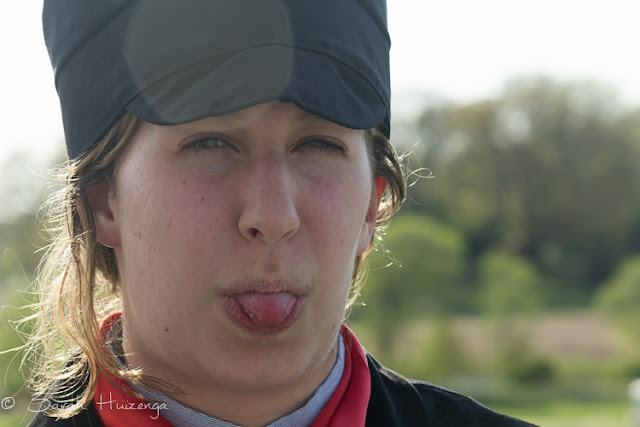 I know that I will get in trouble for this one, but honestly it is her own fault. My lovely daughter, Mallory, a tour guide at the historic Windmill that is located on Windmill Island. She is at the end of her  fourth day of 10 hour shifts.