In preparation for Kat Sloma's A Sense of Place class that starts in a couple of weeks, I went to Grand Haven last week Friday. I spent a lot of my toddler and preschool years in Grand Haven. Growing up we lived about half way between Holland and Grand Haven. My dad worked in Grand Haven so we would often go that way to get groceries and stop and visit him.

I took some pictures last week, but mostly I took a trip down memory lane. I wanted to start the creative  thoughts flowing in my head for Kat's class. I don't know what the course material will be, but somehow I have a feeling our early years will come into play.

I don't want to reveal my pictures that I took yet, I am saving those for class. But I didn't want to waste the opportunity for something for Walk and Click Wednesday. So I visited the Pere Marquette 1223. 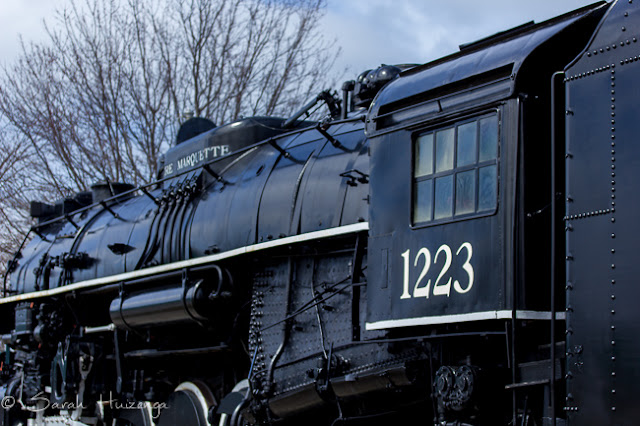 Built in 1941 by the Lima Locomotive Works for $90,000, 1223 hauled freight between Toledo and Chicago in the years immediately before and after World War II. 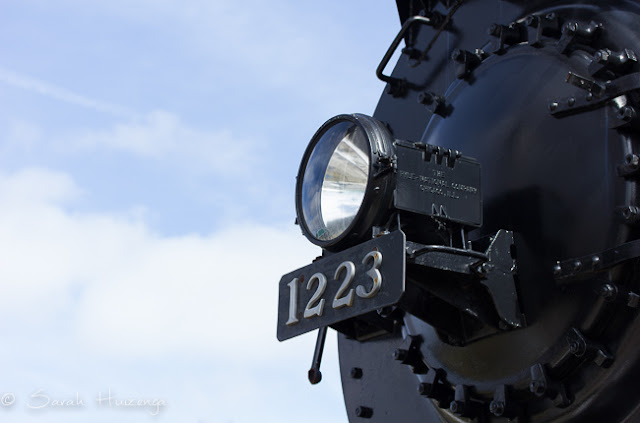 When Pere Marquette was absorbed by the Chesapeake and Ohio Railway, 1223 was assigned number 2657 but never had the new number painted on her. The locomotive was not paid off at the time and the merger agreement stated that equipment still under trust remained in Pere Marquette livery. 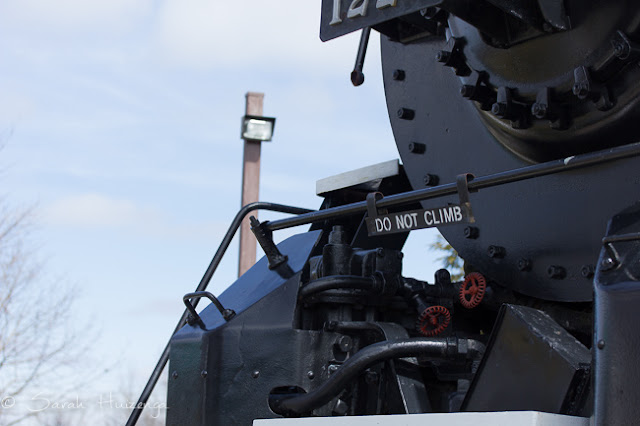 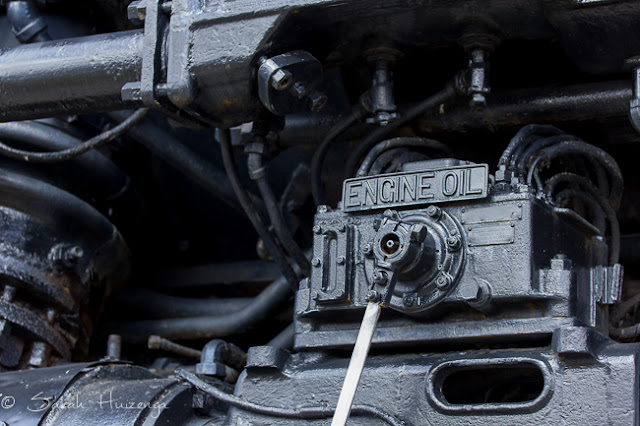 After retirement, 1223 was moved to New Buffalo, Michigan to be scrapped. However she was repainted and moved in 1960 for display at the state fairgrounds in Detroit. 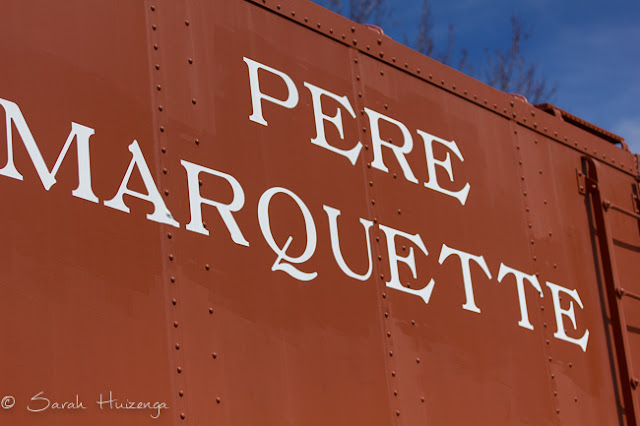 In 1980 state fair officials wanted to expand the grandstands but 1223 stood in the way. The City of Grand Haven won the bidding process. 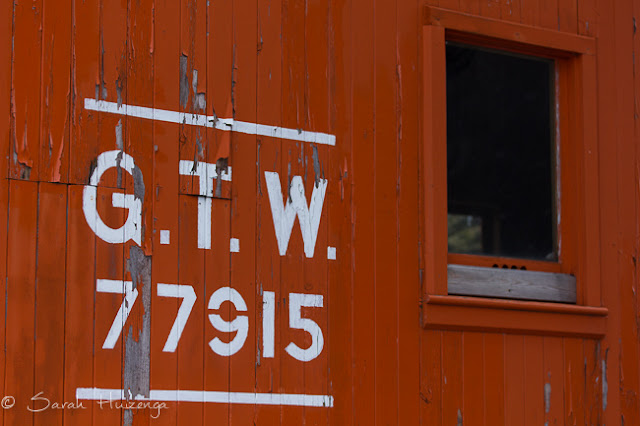 With the help of the Michigan National Guard as well as Grand Trunk Western and Chessie System railroads, 1223 was moved to Grand Haven. The 180 mile trip took place on September 1, 1981. 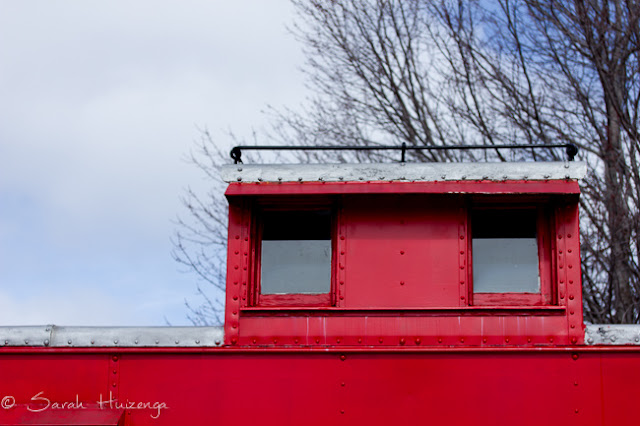 Oh didn't you have a time! I love trains and that first shot is my fave, followed by the red punch in the last.
There is something about the massiveness of trains, there speed and the rush as they move past that is thrilling-sort of like the ocean on a big surf day, how it thunders.
There is a trolley museum here in Kennebunkport where they restore old trolley cars. The restorations are well researched and take a long time. One of my friends volunteers there and I was able to go into the barn where they do the work. Really cool, but as they're so packed in under cover hard to get shots.
I hope you enjoy the Sense of Place class. I'm sure it will be great. All of Kat's classes are.
Happy day to you.

I love trains steam trains in particular such majesty and an engineering triumph... Thanks for sharing...

You know, we've both said several times how we seem to think and be alike! Guess what I took pictures of yesterday...an old steam engine and two old train stations! My family is train crazy; all four grandsons, my son and myself! I'm going to forward your blog post to my son and daughter so they can show their boys! Great pictures. That blue sky is wonderful behind that shiny black engine! My favorite is the one of the caboose. I really miss cabooses!

Apparently I'm not the only one with a train fascination. I enjoyed your little guided tour...immensely!

Very nice photos! I love all the different angle. Trains can be so fascinating - my husband would love this even more than I do.

Trains are fascinating! Have you ever been to KC to Union Station? It's a great place for train buffs. You must love history. As I've gotten older it's far more interesting.

my father was a dispatcher for the Burlington Northern, so i have spent a lot of time around trains. these were so fun to look at.

Hi! Nice series of Steam Locomotive photos. These are very cool.
Wishing you a wonderful day.

You make me miss all of my favorite cities everytime I come to visit..♥

I love those old trains and enjoyed your post. I have boots similar to the ones in your header and I love them! : )

Old trains are great subjects for the camera....these are great! And so clean!! They must have polished them up for your visit. Fun!

What an interesting post...I love trains and still have not captured any pictures of them since my photo days began. I hope to one day soon! I love your images and the history you shared. :)

I love memory lane adventures, Sarah. Sounds like you really enjoyed this. Love that first image, but the close-ups are grand. I moved so much that it's virtually impossible to visit my childhood havens, but in my wanderings I am often reminded. Thanks for playing in Walk and Click Wednesday!

Wonderful photos, love the last one, that red is amazingly beautiful. Such a lovely walk

Love these! There is an old steam train in CT that still makes runs up the river. We took over the parlor car with my wedding party the day before we got married. Rode the train up the river to the boat dock, got on the riverboat and had lunch...It's a beautiful site in the colors of autumn! Nice capture. Can't wait to see more!

They photos are great, you really do have a good eye for composition. I have off this week and am planning to visit where I grew up. It has been a long time. I hope you have a good week!

The class with Kat sounds really interesting and I can't wait to hear all about it. Beautiful pictures of the old trains esp the last one.

Great blog. Love how you talk about going back. Great train pictures. My uncle worked for Baldwin in Pennsylvania.