To The Market We Shall Go 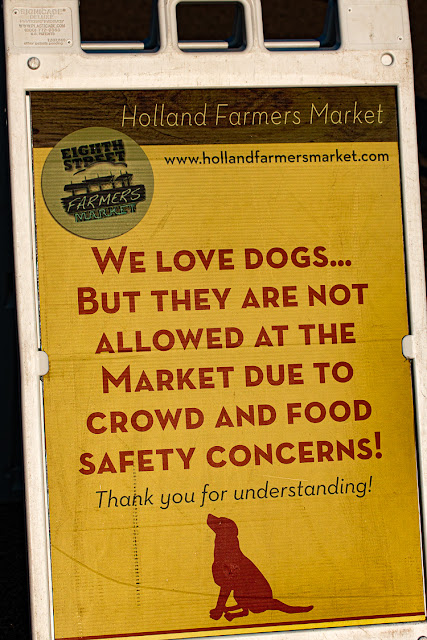 We all start with an understory to our day long before we ever walk out the door. It could be something as simple as the fact that we ran out of time to make coffee, or that our new underwear doesn't fit like our old, favorite underwear. Or it could be more complex: we are tired of waking up alone every morning, or our old dog stumbled down the steps to go outside...again. 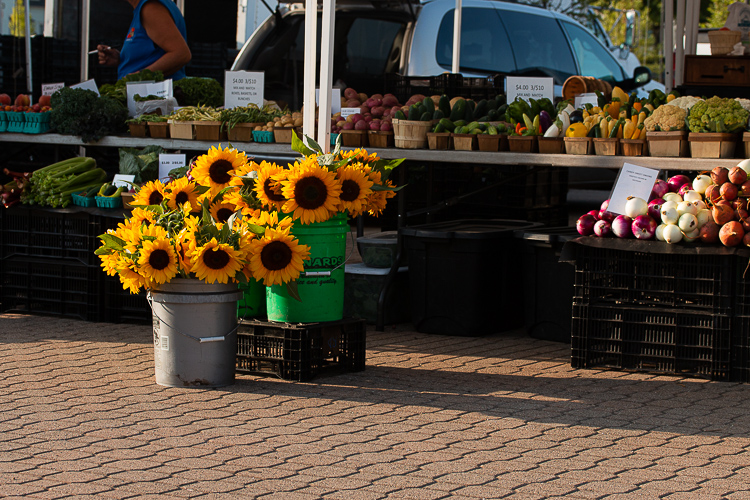 Maybe that is why the series I use to write - The Coffee Shop Chronicles - did so well. There was always was an undercurrent to my day long before I reached the coffee shop to peer into other peoples' lives. I think in the busyness of my life this year with a puppy I haven't taken the time to acknowledge that understory. At least that is until last week when I set out to do Exercise 31 - Markets and Stalls in the photography exercise book Shooting with Soul. 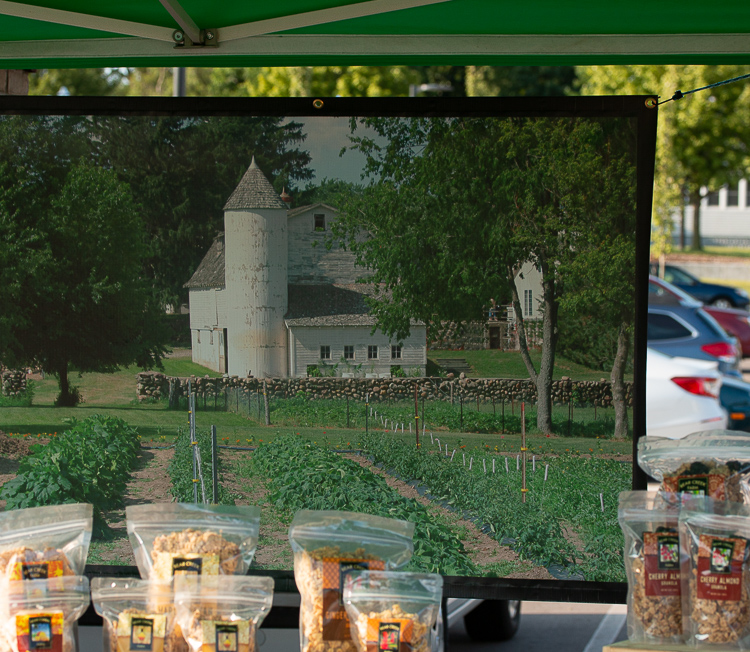 Before I leave the house at any given time, I always take the puppy out to go to the bathroom before he goes in his crate. As we pitter puttered down the bike path, I noticed the neighbor across the street's dog coming down his driveway. Odd, I had heard his car that morning when he left for work, and his dog is always in the house when he is at work. Maybe his teenage daughter was home and let the dog out. I quickly sped Atticus back to the house. These two dogs had met the night before, Atticus loves everybody, the other dog didn't feel the same.

Atticus zipped into his crate, I wrestled with the thought of trying to catch the neighbor's dog and knock on his door, but when I went back outside she had disappeared. Maybe the daughter was home.

I left for the Farmers Market, but my mind kept going back to that dog and our busy summer traffic road. 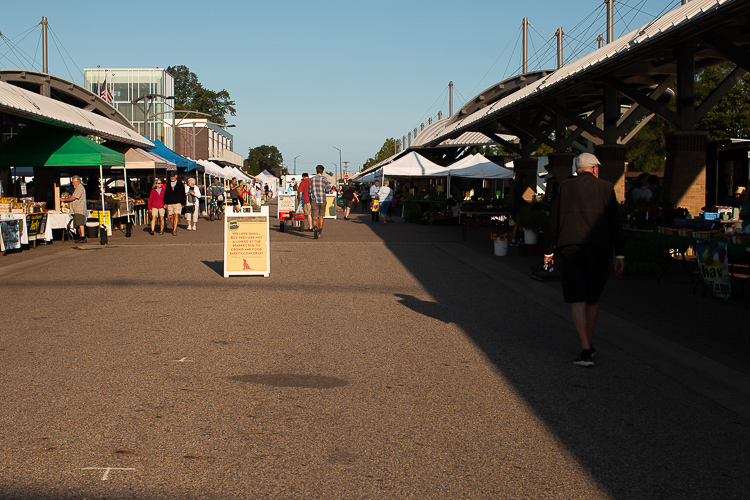 Once at the Farmers Market I forgot about the dog. I grabbed my camera and my 35mm lens for some wide/establishing shots of the market. I was at the market just after 8 a.m., it wasn't busy yet. I wanted photos of the stalls, not photos of crowds. I turned my camera on to check the settings needed for the light and noticed the blinking battery light. You have got to be kidding me. I just used this camera two weeks before, and I had plenty of battery. Knowing I always keep an extra charged battery in my camera bag, I went back to the car to get it. After a thorough search of my camera bag, I found no extra battery. Seriously! 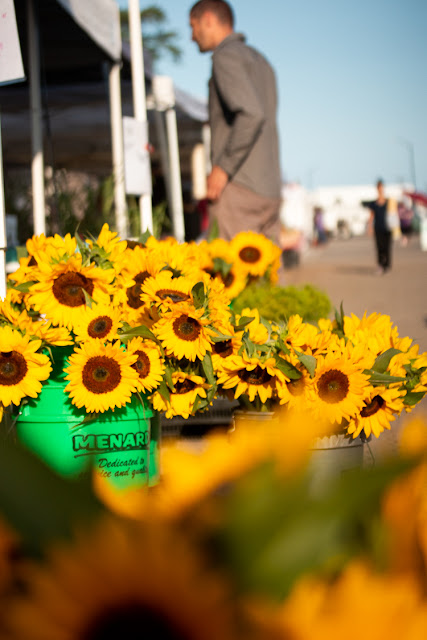 I decided I was just going to see how long I could go with this blinking battery. I wasn't going to go home and come back. It would take too long, the light would be too bright and I was afraid I would find the neighbor's dog lying on the road. 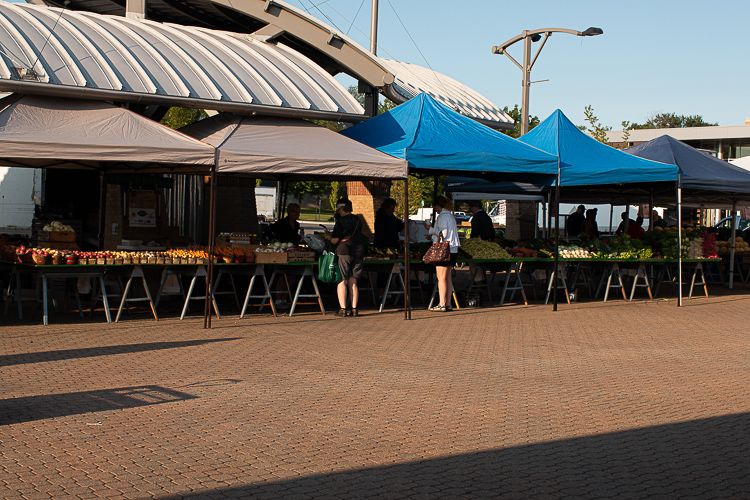 This exercise made me very uncomfortable. It was great that it wasn't busy with a lot of people, but I felt so exposed, wandering with my big camera. Now, if I had been wandering around with my iPhone snapping photos, I would have blended right in. The funny thing is when I see other people with their DSLR at the market I only wonder what they are going to shoot. 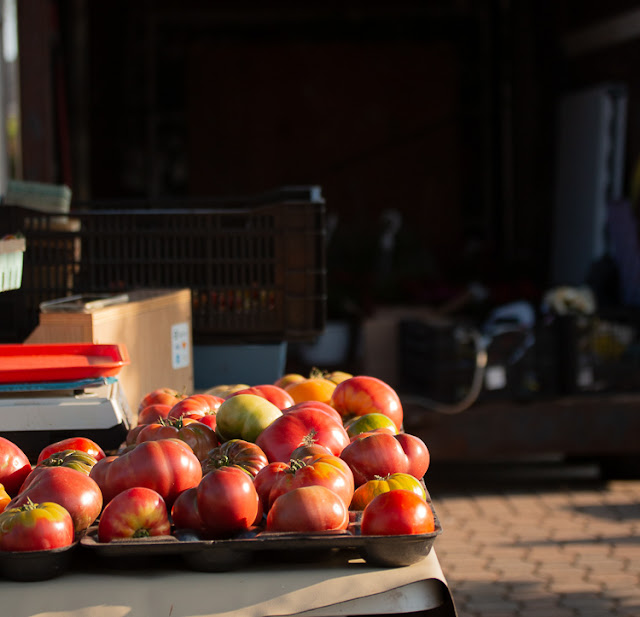 This feeling of being uncomfortable inhibited my ability to set up shots with thoughtful composition and I gave no consideration to the story I wanted to tell. Still, I pushed on. Determined to keep trying until the battery quit, which it was surely going to do at any moment. 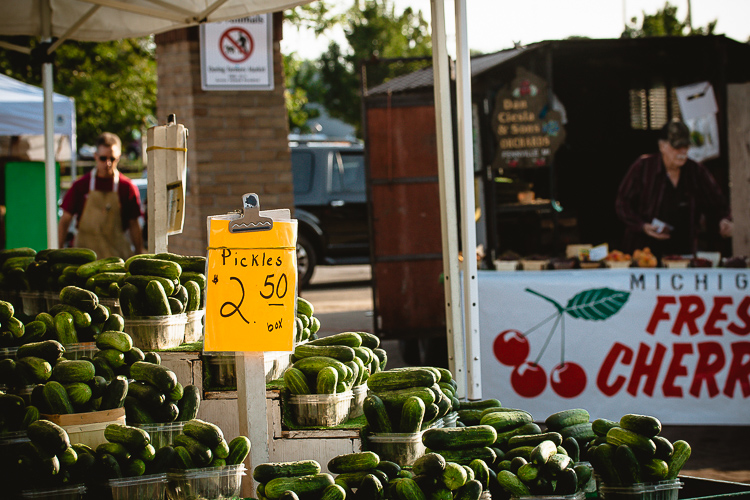 After about a half hour, the light was getting too high and market too crowded for any more shots. It was time to go home. The battery never did die. 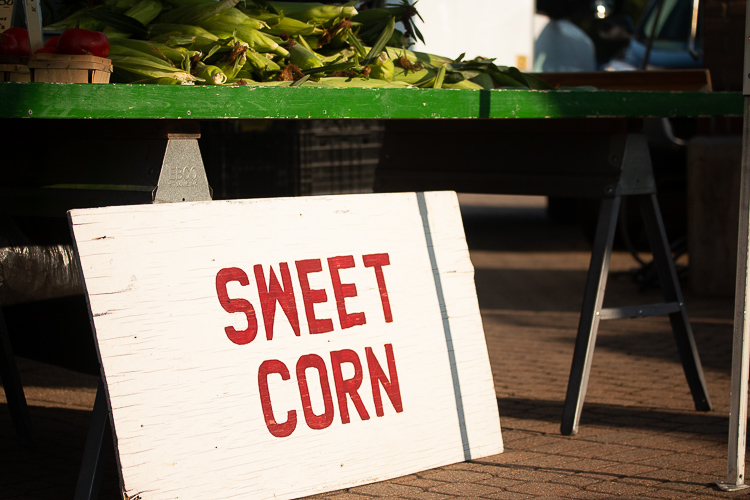 As I crested the rise of the hill near my house, I saw the neighbor dog wander across the road from our house to her house. I parked the car in the garage, grabbed Atticus' leash and went across the road. She was sitting, shaking on her front porch. She came to me readily and let me put the leash on her. I called the neighbor's work and asked that a message be given to him. We sat on the porch, she resting in my lap, until his car pulled into the driveway about ten minutes later.
Posted by Sarah Huizenga at 1:00 AM

I love your soul and core . . .
Whew . . . I feel better.
I couldn't concentrate on your photos.
Guess they deserve a second look.

Well written! You did have us worrying about that dog the whole time you were showing us the pictures. Adding the dying battery just added to the suspense! Interesting, Sarah! Thanks!

Thank you for this reminder of "the understory" so true and really does matter. I'm coming back to reading blogs more and less scrolling through what IG wants to let me see.

It's funny how the understory really does tell the story - the distractions and everything else going on... I'm glad you were able to help your neighbor's dog, and he wasn't lying in the road (ugh). What is it about going out with a big camera and feeling conspicuous? I am the same - yet, I never question other people who are out with their camera. I've been wanting to take mine to the farmer's market, but mostly, have forgotten. I know, though, that if I had it with me, I would feel like I'm standing out, or like a poser - or - something. This is one of those things I am seriously hoping to do more of. Hopefully, it's just a comfort level.

I'm so glad you looked after this dog and called the neighbor's work. The restlessness and worry for this dog - even if you said you forgot about her once at the market - is felt throughout your post. I also comprehend your feeling uncomfortable and exposed with the big camera - it's funny, I sometimes feel like that as well. I wonder why?